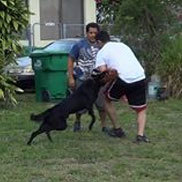 It was initially believed after purchasing a German Shepherd puppy from Miami-Dade County K-9 Services that the breeders, Mike & Helen Paula, had divulged all germane information regarding our new puppy. As such, we were delighted with the new addition to our family. However, it has recently come to light that Mr. Paula, who finalized the transaction without his spouse, was not forthcoming regarding pertinent medical information for the Dam of our new puppy. On November 26, 2013 my puppy was diagnosed with dermodicosis which is a disease that is inherited from a puppy's Dam. Dermodicosis in human beings is know as scabies. Furthermore, dermodicosis is known to cause skin lesions, which ultimately leads to hair loss, immune system problems and even genetic disorders. The treatment of dermodicosis is quite costly and time consuming as the dog owner must make frequent visits to the veterinarian. Moreover, dermodicosis is not a curable disease and can reoccur at an unknown frequency throughout a dogs life. As Miami-Dade County professes to be dog breeders, they had to be aware of the before mentioned disease carried by the Dam and as such knew that any litters born to this particular Dam would subsequently suffer with dermodicosis.Miami-Dade County K-9 Services should have signaled the AKC as to the disease harbored in the Dam and subsequently not registered the pups with the AKC. Moreover, Miami-Dade County K-9 Services should have been upfront and honest regarding this matter so that I, like their other customers, could have made informed decisions based upon complete disclosure. It has become quite apparent that not only the negative feedback but the complaints against this backyard breeder have been justly earned. It is my sincerest hope that this complaint will assist would be puppy purchasers to choose a breeder wisely so as to avoid the emotional and financial suffering that my family now knows.

Miami Dade County K 9 Services
0
%
Doing nothing would be this company's favorite pastime, if they had the energy for it.