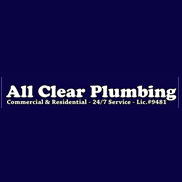 Having problems with ALL CLEAR PLUMBING?

Our bathroom sink and utility sink, in the basement, were both over flowing whenever the washing machine in the basement, or the shower on the second floor, was being used. I tried to dispose of this water in the toilet in the basement. However, any water that I poured into the basement toilet ended up back in the two basement sinks, and eventually on the floor.

That's when I realized that the sump pump in the basement was not working properly. This pump is supposed to turn on, whenever a certain amount of wastewater enters it, and then pump that water into the adjacent sewer pipe. Since the pump was not functioning, it would simply remain full of water; and any additional water would have nowhere to go. At that time I assumed that the problem with the pump was the cause of flooding in the basement, although I was confused as to why it would flood when the upstairs shower was in use, since the upstairs shower drainpipe does not feed directly to this pump.

We asked our neighbors for the number to a plumber that they thought would be able to come right away. They gave us the number to ALL CLEAR PLUMBING. I showed the plumber from ALL CLEAR PLUMBING, the the area in the basement where the pump is located. From this area he was able to view all of the pipes leading to and from the pump, as well as the main sewer line. I explained to him that the pump was full of water, but it would not turn on; I also explained to him that the sinks in the basement would fill up with when the upstairs shower is used despite the fact that the drainpipe for the upstairs shower was not directly connected to the pump.

Prior to the appointment with ALL CLEAR PLUMBING I went online to research what the approximate cost would be for a new pump. From what I could find, the price of a pump ranged between just over $100 for a good pump, to just under $400 for the best pump, plus labor. I assumed that we were being given an inflated estimate because we were in a difficult situation, i.e. sewage backing up into our basement, and ALL CLEAR PLUMBING figured we would just pay whatever price they gave us. I eventually decided not to pay the $1, 300, but to instead get other estimates.

Because we got the number for ALL CLEAR PLUMBING from our neighbors, and not by checking the ALL CLEAR PLUMBING website (www.allclearplumbing.com), I did not realize that ALL CLEAR PLUMBING offered free estimates. So, once I decided that I wasn’t going to pay $1, 300 for this job, I said to the plumber “Just tell me what I owe you for your time." Since they offer free estimates, his response should have been, “you don’t owe anything”. Instead, he went out to he’s truck to call his boss, William Torrens, and then came back to tell me that it would be $125 plus tax, which I foolishly paid.

On the invoice from ALL CLEAR PLUMBING, the plumber wrote: “Checked job found bad ejector pump in basement gave price $1300.00 will call if they change mind.” Nowhere on the invoice does it state that he performed any work in my house because he did not perform any work in my house. By all accounts he did exactly what he would do prior to giving someone an estimate. And he did give me an estimate, but my estimate was not free as their website claims. My estimate cost me $125 plus tax.

Further, the plumber from ALL CLEAR PLUMBING did not even properly assess the cause of the flooding in my basement. We subsequently had two plumbers come to look at our pump/pipes in the basement, Roto Rooter and another plumber. Based on the exact same information/access provided to ALL CLEAR PLUMBING both of these other companies advised us that the cause of the flooding was not the pump, but a clog in the sewer line.

This clog in the sewer line was causing a build up of water, which eventually backed up into the pump and then into the sinks in the basement. Because the pump was constantly full of water, the float switch was constantly switching on, and the switch eventually burned out. The faulty float switch was not the cause of the flooding in my basement, but instead was one of the effects of the clogged sewer pipe, which went undiagnosed by ALL CLEAR PLUMBING. We got two FREE estimates from these companies for clearing the clogged sewer pipe, as well as for replacing the pump.

I called William Torrens of ALL CLEAR PLUMBING after receiving the second estimate to explain everything that I just mentioned and to give him the opportunity to do the right thing. He declined that opportunity and instead told me that he believed he was entitled to the $125 plus tax because his plumber unplugged and then plugged in pump; he said that the plumber had diagnosed the problem, and that diagnosis cost $125 plus tax. I asked Mr. Torrens to please give me an example of a situation where one of his plumbers would visit a home and there not be a service charge. He proceeded to give me the following hypothetical situation:

I then asked him “what if the pipe was not leaking at the time, and your plumber turn on the faucet to get it to leak, would that warrant a service charge?” He did not answer my question, but instead said “why would he (the plumber) do that, he wouldn’t do that”. I told Mr. Torrens that I believed that his plumber plugging and unplugging the pump in my basement was akin to him turning on my faucet in his hypothetical example, and I told him that I believed that he knew this to be true.

I also asked Mr. Torrens why his plumber never mentioned to me that there was a clog in the sewer line, and I said to him that if I had paid him the $1, 300 I would still have flooding in my basement. His reply to me was that after the pump was repaired his plumber would realize that there was another problem. I told him that another plumber was able to discover this clog, which cost $200 to clear, without me first having to pay $1, 300.
I then told him that I was confused by his refusal to reimburse me for the service charge, to which he responded that I just wanted my money back because I decided to go with another plumber. I told him that I decided to go with another plumber because I thought I was being ripped off, and I am now absolutely convinced of that fact, and I told him, because at the time that I paid the “service charge” I was not aware that the estimate should have been FREE.

To date, the pump still has not been repaired. However, the one plumbers from did clear the sewer pipe, about a week ago, and we’ve not had flooding in the basement since despite that fact that to date the float switch in the pump is still broken.

ALL CLEAR PLUMBING
0
%
Doing nothing would be this company's favorite pastime, if they had the energy for it.