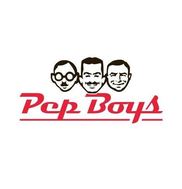 Having problems with The Pep Boys?

Brake pads $50 off coupon never applied to the total!

over pricing for parts and labor

I went to service my car at the Hazlet, Nj Pep Boys store # 55 and was excessively overcharged for service...

Start to finish just an awful experience was the point of making an appointment at 1 o'clock if your car...

I walk in the the pep boys store 120 at 1029 E Altamonte Dr Altamonte Springs, FL 32701 to get an oil change. When I got there the gentleman at the counter see me there. Talk to the white guy that was in front of me. When he got done with him he called the white lady that was behind me and help her. I couldn't believe what I was witnessing I was a bit in a shock mode for a minute. I continue waiting after 25 minutes Waiting another gentleman come By and says someone will be right back with me. I stood there for another 10 minutes before the gentleman that ignored me ask me what he can do for me. I told I want it an oil change to get my headlights change. Look at me funny took my keys and said if I was waiting on it or coming back to ick it up. Which I dropped it of around 10.30ish am at 1.45 I called to know if the car was done they say yes it is ready to pick. I got there I was asking them for my car no one answer me it like I was invisible to them until this black lady come to the counter and ask me how she can help. Very nice lady very friendly they told me it would be 15 minutes before they get done. I ask her about the headlight she said it wasn't in the work order sheet. Might I told the guys in the morning then the rest of the white people didn't even say a words to me. I got my car service at pep boys a lot but never experience it that bad.

Misleading tire sales I had made an online purchase for 4 tires at the store in front of clerk. Order...

On 11/9/2019, I stopped into the Waterbury, CT location to have a "check engine light" diagnosed due to a faulty oxygen sensor. At a cost of $105.87 to diagnose which sensor needed replacing (which is ridiculous), I took it up on myself to do some homework after the diagnosis revealed that I needed the upstream sensor on my 2004 Chevy Malibu Maxx LS and a coolant sensor. The estimate was $566.00 (not including the $105.87 already paid).

I went to a competitor and purchased the upstream sensor. I watched a video on how to replace the sensor which is was VERY easy to do seeing as I am someone who is not a mechanic, but mechanically inclined. The sensor was $46 and it took me about 20 minutes to replace it. The system was "reset" and I no longer have a "check engine" light on. There was no issue with the coolant sensor because the "check engine" light would have come on again or stayed on. You can't diagnose a sensor that has not yet gone bad or malfunctioned and it has not been determined how you produced the diagnosis when in fact, it was fine.

I have no idea how you even conceived the estimate that you did, but I assure you of this - I am going to consult with legal counsel to determine if extortion, price gouging and just literally taking advantage of a customer could be enough for allegations and pursue this matter.

I am DISGUSTED by your business practices/conduct and will NOT tolerate this! You wanted to charge me almost $700 for diagnosis of a faulty sensor and for the replacement of the front (upstream) sensor and the coolant sensor (which nothing is wrong with it). I got this repaired for $46 and 20 minutes of my time watching a quick video.

You certainly do have some never taking advantage of people which is more than obvious with my case and there is no excuse you can produce to validate your actions.

"Check Engine" light is still off at the time of this email - 3 hours after repair….

Any probability of extortion, price gouging or deceiving the public [customer] warrants action. It is unknown how many other victims fell to the illegal actions of Pepboys who did not possess the knowledge of a legit estimate or failed to get a second opinion.

In my case, to cost me out [estimate] almost $700 for 2 sensor replacement (of which one didn't need/require it) is considered extortion, price gouging and/or fraud. As stated, I am not a mechanic, but did purchase the sensor I needed for $46 and replaced it within 20 minutes. How does this reflect the estimate provided by Pepboys? - it doesn't.

It's illegal and unlawful what they did and they should be held liable.

I had an appointment for an oil change and asked for an noise to be located in the front end suspension. Gave...

I am complaining about the manager at pep boys!! at least that's who he said he was!!

My son dropped his mazda off with keys & a complaints note of the car running hot & making noise...

So my car was taking some tries to finally start. Lights on the dashboard are working so I know it can't...

Classic bait and switch! Got an online quote from "Chris" to replace brake pads and rotors. After dropping...

I came in into pep boys in boca chica to get my car service, saw two associates doing inappropriate things to a girl working there

One of the associates name was jorge, and the girl name i don't know but works there, they were in the...

Hi my name is thi nguyen, I am with flex drive I came to this location for service I was there when they open...

I have been buying tires for 45 yrs and these people have no idea what they r doing I saw the set of tires I...

On August 28, 2019, I took my car into Pep Boys at the locations mentioned above. I spoke with Rudy Tovar...

The Pep Boys
1
%
Doing nothing would be this company's favorite pastime, if they had the energy for it.