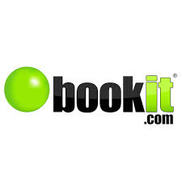 Having problems with BookIt.com?

ComplaintsBoard.com is not affiliated, associated, authorized, endorsed by, or in any way officially connected with BookIt.com Customer Service. Initial BookIt.com complaints should be directed to their team directly. You can find contact details for BookIt.com above.

Use this comments board to leave complaints and reviews about BookIt.com. Discuss the issues you have had with BookIt.com and work with their customer service team to find a resolution.

On March 10, 2008 I booked a Vacation Package including two round trip flight tickets and one room for 4...

Thought to myself "that is a silly typo, because who would say"special only on Friday"then say not available on Fridays.
So I tried to booked, but it kept giving me a daily rate of 192.00. So I called. I got a lady, who spoke to a supervisor, and said that they could approve it. If I went to the site right now it would say $99 per night, she said that the management changed it so it would take the special. I couldn't get it booked on the internet so I called back within about 20 minutes, the sales person was not helpful, and basically acted as if I were an idiot. I did get a manager (Melissa, the Director of the Call Center) she told me that they had a certain amount of rooms that sold at that price and that they couldn't sell anymore at that price. My comment to her was are you suddenly out when I bring the false advertisement to your attention. She said if I did book she would knock off $50, but that was all she was approved to do.

Also there was another ad that said book 7 days and receive a free $100 American Express card that can be used anywhere American Express is taken. But guess what. When I tried to book the hotel for 7 nights, and the dates were available I got this message"This hotel does not allow stays of more than 6 nights for the dates you have chosen."

I really would like to save a little money now that gas is so high, but dealing with this company I think I'd rather scrape my eyes out with a spoon than try to deal with them. How do I know I will have the reservation when I get to my destination, reading the other reviews.

Bookit.com was awful. I would never recommend them to anyone. We were traveling to Cancun & luckliy I knew to call & see if our hotel was even open (it was the grand opening a few weeks prior to our arrival). The first woman I spoke with said that it was open & everything was all set & when I questioned her she then quickly added that it may not be ready for our arrival. I was given email addresses & phone numbers for people that never got back to me. Then we were told we were staying at a different hotel each time we called. Finally after confirming 3 times that we were staying at the Grand Oasis, we get there & what do you know? They don't have our reservation. I had to call them from Mexico & they put me on hold for over 3o minutes. All I have to say is, AWFUL AWFUL service. They should not be in business

Bookit.com — do not use bookit.com!

My boyfriend and I had the worst experience using Bookit.com for our vacation reservation. I highly DO NOT recommend any one to use their resources or to book through them unless you want big time hassles. First, I booked online late one night, and the Bookit.com site froze up while processing our payment for our hotel. It was late at night, so we decided to call them as soon as they opened in the morning to see if our reservations went through or to arrange our trip over the phone.
I recieved a trip confirmation in an email right away, so I thought maybe the reservations went through. I still wanted to call Bookit to make sure everything was confirmed.

My boyfriend called the next morning, and the Bookit.com agents were rude and unhelpful. They were charging his credit card 4 TIMES because thats what they had listed! We kindly explained to them that we had a server problem with their site freezing, and we obviously did not want 4 trips at the same hotel for the same number of people for the same dates! The Bookit representatives were unhelpful, and wouldn't take the charges off our credit card! On top of that, they wanted to charge us $100 for each trip we wanted to cancel, so now this is over $500.00 just for fees and taxes! We explained to them several times that the trip was just for 3 people, and we did not want that many trips, and that the server froze when we clicked to pay. This even after we called asap in the morning. The Bookit.com customer service were very unhelpful, and after 2 hours and speaking to several "managers", they finally agreed to only charge us for one $100 cancellation, even though it wasn't our fault the button freezed. (All the other sites, and my internet was working fine for other sites) We even had to call again before our trip because the charges didn't get taken off right away.

Then as if that weren't ENOUGH hassle, we got haunted by the nasty Bookit.com people again during our trip! We wanted to stay one extra day, and talked to the Condo company we were staying with. They told us the rates, but said if we wanted the little bit cheaper rate, we just needed to call Bookit.com and arrange it with them. My boyfriend called, and they couldn't even find our reservation on their computers, and they said that there WEREN'T any rooms available at that hotel for the one more day!!! Isn't this a booking hotel site?!?!? My boyfriend went back to our Condo desk, and they didn't know what was wrong with Bookit.com. They happily gave us the one extra night for only $15.00 a night extra! A price we were glad to pay after all the Bookit.com hassle.in the future, I would NEVER EVER book with Bookit.com, and I'd either pay more just to not deal with Bookit.com, or use a different hotel site like hotels.com. I will never use BOOKIT.com or recommend it to anyone. I've seen other horror stories on here, and I am not surprised. DO NOT BOOK YOU TRIP WITH BOOKIT.com unless you want tons of hassles Before AND After your trip!!!

This is the worst experience I've ever had with customer service, period! The rate was great so I booked because the terms seems so accommodating, especially with the cancellation policies clearly posted everywhere throughout the booking process. Within 2 days I got these vouchers on my email, so I thought vouchers? What is this 1999? Again, I left it alone in spite of little things that had already made me uncomfortable like the travel insurance I had been charged for which I remember declining. Anyway, all was fine until I called tonight to change the room type and was told I had to pay 19 dollars as they had to cancel and re-book my reservation, again another abusive practice because, when was the last time you called a hotel directly and were charged for something as minute as this? Now mind you there was no rate change, the two rooms cost the same, the reservation total was the same, it was just a fee for the hell of it if you ask me.

So once again I decided to leave it alone. I did tell the agent that my confirmation email indicated that there were NO cancellation fees associated with this reservation as of today's date, meaning there are charges if canceled at a later time, but he explained that while true, those fees were associated with administrative costs rather than hotel fees, he also referred me to the fine print where this language, after a closer look, is indeed vaguely mentioned.

So I thought, "Ok, so I gotta pay", I went ahead and gave my credit card number only to realize later that they charged the card associated with my original reservation, and not the new card, not 19 dollars but 134 dollars to originate this reservation all over again! NOT GOOD, especially because I wasn't told, it wasn't the credit card number I authorized new charges on and NO ONE HAD EXPLAINED THAT THE ORIGINAL FEES ASSOCIATED WITH THE ORIGINAL RESERVATION WOULD NOT AUTOMATICALLY TRANSFER OVER. Add to that really bad customer service, un-refundable airport transfer fees and you got yourself an experience with a company that shouldn't really be in business. Who knows, I might be refunded tomorrow as promised, which I'm not counting on, but regardless I'm loosing money, I have also lost time on the phone and will loose more time finding another hotel. Bookit.com is a huge scam!

Bookit.com — you get what you pay for!

Much like the other complaint about not receiving a refund as promised, I too made a change to my trip within...

I booked travel on bookit.com for my boyfriend's birthday. I found they had very good deals on their site so...

Bookit.com — stay away from bookit.com!

After finding a travel agency to book travel for 21 members of my family, I learned about BookIt.com.in the...

We booked a trip with BookIt to Cozumel Mexico. The have been given exclusive prices and have representatives at the Park Royal Hotel who help get you into a scam situation. Antonio, their representative told us to stay there and go to thier presentation. The hotel had Royal Holiday people all over you. It also had cruise ships parked in front blocking the ocean view and blasting horns at 5 and 6 in the morning. Of course, they don't tell you that when you book with them.

Anyway, I thought they were a reputable company, but when I wrote BookIt asking for help with dealing with Royal Holiday to get released from the sales contract they have ignored me. I am sure they are getting a kickback. I am contacting the Mexican government's tourist agencies to let them know that Americans are going to quit visiting Mexico if they are constantly being scammed by this practice. All you have to do is put Royal Holiday complaints in a search engine and you can read hundreds of complaints. BookIt hides behind this, though they are a partner in setting up clients.

BookIt.com
26
%
Not bad, but could've been way better. This company does respond, but not as often as you'd expect them to.