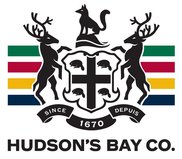 My fiancee and I were at the scarborough Towne centre purchased a wedding band that had a price tag of $3100...

Fashion Fiasco The Bay’s White Space Gala held in Vancouver on October 5th was a fashion flop. If the...

My mother previously paid the outstanding by cheque, however they made a mistake... and never say why and what and how... the credit account shown a insufficient fund for the payment. They admitted is their mistake and told me that has fixed the problem already. My mom is now still recieving letter from them showing an outstanding due to that event and recieving calls from credit department in very rude tone. Why do they always have to start with a "owe them a billion" rude tone, ? is that how they trained? Is so disgusting! And I can never find a right place that can make that complain to.

What a cheap company the Bay has become! I'm an insider. I know. I've been working for the Bay for over 4 years now. Things are just getting worse. The current ownership is trying to run the company on the cheap and it's really showing. I was given a threatening letter about possible termination of employment because I'm not opening enough HBC accounts. They want a bunch of new accounts while only giving me one 4 hr. shift a week! They are not scheduling staff properly anymore and it's hurting business. Departments have become disorganized and a mess. The #1 customer complaint is that there is never any staff around to help them and that cash check-outs are always closed. Customers seem to like my salesmanship but the Bay does not appreciate a good employee. I'll be looking for new employment. Also, management at my store is very poor. They avoid customers and their communication with staff is lousy. The only thing they do well is take coffee and smoking breaks every half hour.

I bought a Ralph Lauren Red Sweater from the Bay at Bloor and Yonge on Dec 17. On March 18 I discovered the seem had come apart I phone the Bay and was put the Ralph Lauren department. I told them I did not have the bill . I got told to bring it in . On March 19 I brought it in and I got told to go to the other side because I did not have a bill. A clerk told me because it was soiled and damage. I could not return it. I decided that I would get rid of it and not shop there again.

I was shopping for jeans with my two sons at The Bay Downtown on the second floor. During the entire time I received no help from the sales assistant who sat in the change room while my sons tried on pants. I asked for another size at one time and he told me "If it is not on the floor then we don't have it". The jeans were within ten feet of where he was sitting. All together I bought 6 pairs of jeans for a total of over $300. and received no help from him. It was not as if he was working with other customers. He was sitting studying a sheet of numbers and flipping pages on a clipboard. While I was there another man who came to shop from out of town complained to me "wehn I shop at the Bay I know I pay more but expect service". I directed him to try the Polo Park store. The sale associate was called Brick.

I purchased a bed in a bag along with 4 pillows back in December 2008, about a week ago when I was taking apart my bed to clean the sheets, I noticed that my two shams had bugs all over them. I was freaked out I immediately took everything and placed it in a garbage bag and the next morning went right to The Bay. The manager of the store without hesitation took back the stuff and after approx. five days my account was credited. Unfortunatly, I am having a hard time finding a new bedding set that I like and not to mention one that is equivelent to the price I paid. I was hoping to receive some sort of compensation to the awful experience that I had and for the time it's taking to find something I like and goes with my decor since I decorated my room to go with the bedding. I hope to have this matter dealt with in a timely manner since it's been two weeks that I have slept with no bedding.
Thank you in advance,
Lori

My mom, who hardly speaks english, had money stolen from her by the cashier at the Bay on Queen St. She...

Please do not trust their suit alterations. I picked mine up and after trying it on in the store found that the jacket wasn't altered. The staff member was nice enough and wanted to accommodate the problem, but I'm leaving the city so I cannot wait days more for them to fix this, despite being charged for it. Perhaps I should have known that there would be mess ups with the condition that they keep the store and their under staffing. Regardless, it has certainly ruined my desire to ever step into one of their stores again.

I was so frustrated and annoyed by my recent experience at The Bay, I am tempted to cut up my Bay credit card...

The Bay in Laval — treated me like a criminal

it all started on valintines day,i bought a 150$ bottle of parfume for my girlfreind but turrns out she gets a reaction with this brand,so when i go to retune it (with no reciept)i was told sorry they can not,i said fine it is my fault that i threw out the recept,well i found out that there policy is without a recept i can get a credit,so icall back and spoke to a rep at the fregrance counter named Dianne,now first of all im talking in english and she refuses to even try to talk back in english(i mean i know im in quebec but why should i try and not her)when i bought the item she was nice but when it came time to retune it,thats a different story,now besides the fact she wont speak to me (or even try)wasnt enough,she claims i need the reciept and pretty much called me a lier,i had to stand there for 30min, listening to her tell me that she all of a sudden forgot the policy and made me to look like the ciminal,i was getting all sorts of looks from others. well istood my ground and after a long argument they gave me credit aon a gift card,(thats all i wanted)but whats in there policy is that they should do just this as long as i have id,now when Dianne was told by her own manager to refund me on a gift card she became even more rude,asked me for id so i gave my drivers licence(name and adress on it)then she actully told me that it was a fake,i mean whatt more can she do to insult me?i want a letter of apoligy from her and the company as i am a loyal client of the hbc(the bay and zellers)this experiance had put a big dent in the way i look at this company,its ok when they take your money but when you ask for it back,they have all sorts of excuses including telling me to my face im a lier,i want this rep of yours (at the cairffor laval store,female fragrance dept)dianne to get retrained in her job and the policys as she was very rude and uninformed on her job

Thebay.com / Hudson's Bay [HBC]
9
%
There is some slight activity coming from this company when it comes down to resolving complaints, but so far it's neither timely, nor relevant.