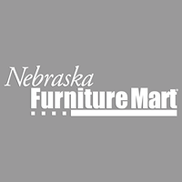 Having problems with Nebraska Furniture Mart?

My husband and I currently moved to Omaha and needed to purchase a new bed. When we went into look for beds in the store they were so nice and we were in and out of there fairly quickly. They told us it would be 7 days until our bed would be delivered. I got a call the day f the "delivery" and was told the head bed was cracked and they weren't going to be able to deliver it until 2 weeks later! I said well if the head board is cracked I still want my bed delivered today and they can deliver the frame when it comes in. They said "Fine". The delivery men were SO rude. Then came time for the frame to be delivered and no one had called me so I called them and was told it would be another 5 days! I was so fed up with all of this but finally the day came and still no one had called AGAIN so I called and was told they will be there from 11am-1pm that time came and passed so I called and was told they were running 2 hours behind. I couldn't believe it I have NEVER experienced such poor customer service and will NEVER buy from there again ridiculous. (I also have friends who have been here for a month with NO furniture and ordered from there as well...they are STILL waiting on their furniture and was told it would be another 2 months!) How are they still in business.

I bought a GE 23 cu ft side by side refrigerator. I bought the extended 2 year warranty. The first year the unit had a cooling issue so I called the warranty people. The refered me back to the manf. I called GE and it was repaired. On my second year I had a issue with the ice maker and got my first chance to deal with the warranty people. Its horrible. They use some small place in Plattsmouth and it takes forever to get in touch with someone. I wound up finally calling GE and paying for the repair.
Don't buy the NFM warranty on anything, save your money!!

I would hesitate to buy anything from Nebraska Furniture Mart that you intend to pick up at the store from their loading area. The way it is set up you cannot open/inspect the merchandise before it is loaded. We purchased a console table that had several deep gouges discovered when we took it out of the box. At that point you have to either return it to the store in the box, or they offered a pittance ($30) off to accept as is.

The lesson is - always inspect it before you leave the store. If they won't let you - don't buy it.

I will never make another purchase at NFM. I purchased an expensive electronic item with CASH, and when I tried to return it 3 days later they would not give me my CASH back. Apparently when I gave the sales clerk my phone number my husband's name came up, and she rang it up that way. I guess she couldn't take the time to see I was a WOMAN. Now they will not give me my money back, but of course they would be more than happy to give me store credit. When I said that if I had purchased the item at Best Buy or any other store with CASH I would have gotten my money. Their weak excuse is that these other stores don't care about customer security. WHAT??? I WILL NEVER, EVER PURCHASE ANOTHER ITEM THERE AS LONG AS I LIVE. I will be telling this to all my friends, coworkers and family. Mrs. B must be rolling over in her grave over how the customer is treated now.

I purchased a sofa and coffee table from NFM paid cash and it was delivered June 18th 2009 . Around the 1st of Nov sitting on my sofa with my arm on the back top I felt what was a staple coming out after looking more it had a gap in it where you could stick your hand down the staples were coming out and even looked as if some staples were never put in it. I called NFM it took almost 2 weeks to get an appointment. Nov 13 2009 someone came to my apt.to look and take pictures, He also turned my sofa so it was laying on the front, the back in the air and then he ripped the lining from the bottom that wasnt coming undone and stuck his arm up my sofa and said that the cardboard that suppose to be up on the back had all fallen to the bottom of the sofa back. he said it could be fixed i said i wasnt satisfied with that this sofa shouldnt have anything like what it has and he said someone from NFM would get back with me in 3 to 5 days. Nov 18th 2009 they called and i returned their call to speak to a Ms. Metz who informed me theyd come and get this sofa i asked for a exchange for the same sofa i fill its a damaged piece and she said the 30 day warranty was up they wouldnt do that that they would come and take it to fix it I was saving money to pay cash for the chair and ottman that goes with it but that will not happen now to see this sofa I so loved it cheaply made and there costomer service isnt what i would expect. Im very upset now that the man they sent to look at my sofa ripped it even more . I writing this to let whom ever reads this how Kansas NFM furniture is cheaply made.Im very dissatisfied with their costomer servive because its only been 5 months and i dont even have kids that sit on this sofa i live alone this sofa is hardly used!!!

We ordered a table from NFM and when the first table came they just set it up and didn't open/close the middle piece to see if it worked. After they left we tried it and it wouldn't open or close back up. Called NFM and they said a tech would call in 7-10 days...2 weeks later we called NFM back and said, we have no call? They called the tech and the tech told them that he talked to us already and everything was fine??! Well that didnt happen. So My husband told them to have another tech call..2 weeks after that and no call. He called NFM and told them to just send a new table. They brought that two weeks later and opened it and the middle piece opened but wouldn't close totally when pushed together. There is a gap in the table about a half inch. My husband called NFM and was like.. Okay, WTH? I want a tech to come out and fix this one. They said they can't guarantee he will call in 7-10 days but will put in the request. Then proceeded to argue with my Husband that they can't control anything. Umm..didn't we buy this from NFM and now they have no control over their stuff? Uh..weird. He talked to a Manager too and she was totally pissy and never once apologized, said she understood our frustration..she just kept telling my husband.."ARE YOU DONE, ARE YOU DONE, so I CAN TALK?!" What the heck, worst customer service, EVER! So..our table is still not working right and they apparantly hire tech's that lie and never call. I won't buy from them again... EVER.

To all who want a job at this place, TRY SOMEPLACE ELSE! These people don't give a *** about you they...

Nebraska Furniture Mart
23
%
Not bad, but could've been way better. This company does respond, but not as often as you'd expect them to.