Resolved “bag did not arrive in time for trip”

Resolved “No properly handling my refund”

Resolved “Failure to issue a refund for returned merchandise”

R
Ron Parker of US
Dec 29, 2018 11:49 am EST
Featured review
This review was chosen algorithmically as the most valued customer feedback.

Hello, I'm writing to inform you of the poor customer service I received from one of your managers (Jichelle) on Friday, December 28, 2018 at the Saks Off Fifth Avenue store located at 555 12th St NW, Washington DC. I attempted to return two suits to the DC store, that were purchased the day after Christmas (buy 1 get 1 free). I had the receipt, but...

We purchased a pair of Stuart Weizman boots in a 9.5 for a photo shoot for my daughter. The boots were delivered and were scuffed up and dirty. The white dust bag looked as if it had been latex out in the dirt and was brown and filthy grey in areas. Unacceptable. I called and was assured this would be handled and not the normal. They would ship out a new...

Saks OFF 5th - i’m complaint above most disgusting customer I had at sak s off 5 th.

On Dec 2 Nd I was shopping at sak fifth off . Brooklyn On 850 3rd ave . Brooklyn ny 11232. I walk inside very negative unpolite greeting from the security guard at front .when I walk in the store greeted unprofessional and tasty ask one of representatives where is kid department and he answer under is breath in tasty and polite way . I shop for few hours in... 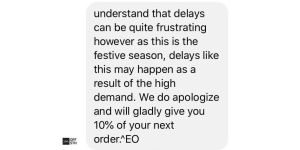 Saks OFF 5th - Canceled order did not occur
An order was canceled by customer service last sunday upon my request, due to the fact that I had purchased the $267 down jacket... 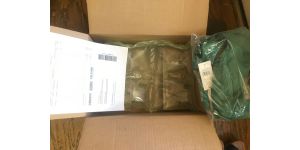 Saks OFF 5th - Product not shipped. Complete ignorance by customer service
Hello, I placed an order number #10298588 on May 24th 2020. I was told my order was partially shipped (two items out of three... 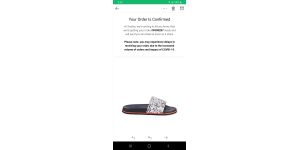 Saks OFF 5th - A refund for order # 9998287
Hello I placed this order on April 5, 2020 with one of your representatives. When I received the delivery confirmation I noticed...
F
Fredf3 of US
Nov 29, 2018 8:49 am EST
Featured review
This review was chosen algorithmically as the most valued customer feedback.

I bought 2 suits at the Off Saks in Dallas, Texas back in July 2017. These suits cost me $800.00, as it was a BOGO. They were Saks fifth ave. suits made with material from Ermenegildo Zegna. The suit jackets began to bubble within a few months, not to bad at first, but now a large section of my suit jacket is now noticeably bubbled. I had this happen once...

I placed an order October 6 for 6 clothing items totaling 1172.99. I received the package on October 15 with only one item in the box. I called and spoke with customer service four times, including one supervisor. Finally October 28, I was told that they investigated the situation and they have pictures at the shipping center that show the box containing...

I was at Liberty View Plaza in Brooklyn NY incident happened on 9/27/18 . I used to like this store, most of my shoes I bought them there but after having a terrible experience today I won't go back. I returned a pair of unworn shoes and the cashier Odeth was super rude to me. To begin with the story I bought two pairs of shoes without the box. When I first...

I bought a top from Saks off in Topanga, CA. The top was in a bad condition. It was dirty and stained. While I was checking out I mentioned it and the register and she confirmed that the it was dirty and incase I don't succeed to have the staines removed they are ok with me returning it! She even mentioned it on my recied. I went back to return tbe top...

The Order was a Filson watch The watch was trashed and missing two additional watch bands The people in Central America are non responsive I want a replacement Filson Gift Watch Set but I have to pay 420 dollars to do so.Saksofffifth please send the two watch bands someone robbed out of my order. Date of Order [protected] 09/02/2018 Thanks John Jed Skelton

I personally asked to have 4 pair of shorts and a black tank top to be placed on hold until Tues., Sept. 11, 2018.
The Mgr., Michael assured me this was fine.
I drive 45 miles back to the store as I promised and found all the items were gone.
I am very disappointed in the fact that I homered my part of the bargain and you did not.
Bye-bye Saks!
You don't deserve my business!

I purchased a pair of sandals on Friday. I flew back to the Uk on Friday evening and on taking them out of the box I realised I had two right feet in a size 8. Would it be possible for someone in the store to find the two left feet and I would be happy to purchase them to match the set I have and get a colleague to pick them up? Alternatively, how would I proceed with a refund and sending them back. I will provide a copy of the receipt and sandals.

Thank you so much in advance.
Emma

My name is Darling Amoo and i was in your shop in Skokie blvd in Illinois last Friday when one of your shelves hit my left foot. My foot began to swell and the store manager asked for my name and number and ask that I go to the hospital and someone will keep in tounch. I went to the emergency and I am just recovering from a contusion of my left ankle and...

Saks OFF 5th - customer service while at register

I just recentlt shopped at the The Farmington Hills Michigan store on Orchard Lake and 14 Mike Road and was not regarded as a paying consumer. Upon getting in line the sales person, (black female, the store general manager knows who the employee is) informed me that she was waiting on a customer who returned to the floor to continue shopping. As the...

Good Day. Last night May 31st I went in to your Saks off fifth store in White Plains NY. I felt so uncomfortable. Your store personnel followed me around. None ask for help but everywhere I turned someone was near . My husband and my son later came in to the store and after a few minutes my husband went to the door with my son. I asked him why he wa...

To the Manager Client/Customer Service Saks Off 5th I am writing to you today to report an unpleasant experience my husband and I had at 1330 Great Mall Dr, Milpitas, CA 95035. The person serving us at the counter was Deena. I had recently purchased a jacket online. I was sent a wrong jacket. I read the return label/document to understand your return...

I bought a substantially expensive item from Off5th. It cost over $4000. I bought it for a birthday, ordered it three weeks before the birthday. The birthday is now tomorrow 23 working days after I ordered the item. I have called the delivery service Borderfree every day for the last four days. Every day I am told the same thing, they are following it up...

Saks OFF 5th - I have received the wrong size 2 times!

I ordered a pair of jeans on Dec 28th. And I recieved the wrong size. I called and they told me I had to purchase another pair and return the wrong size. I did what i was told and RECIVED THE WRONG SIZE AGAIN!! I Have called to try and resolve this and customer service is terrible. A manager was supposed to call me and never did. So needless to say I've...

I have called saks off fifth no less than 5 times for an order I placed online on Dec 24th. I knew due to the holidays, there must be some delay on the online order. And I totally understood that. However, every day when I checked the order status, it always showed "processed" not "shipped". I called the customer service at [protected] on DEC 24TH, 26TH...

I placed my order from Saks Off Fifth Canada. A order confirmation was never received. I followed up with 2-3 emails to [protected]@ and [protected]@ to see if my order was received with no reply. Two weeks later, I received a shipment confirmation email from Borderfree with an amount of $50 than what I had authorized to be charged to my credit card (all in CDN $). I sent another email without response. I then called. The girl was not able to help me and said she would open up an investigation that would take 5-10 days for me to hear anything. As that time has passed, I called to arrange a return of the items I had ordered. The man that I spoke to said there were no charges for returning my items. Upon receipt of the paperwork, I had been charged $18 for "return processing". I called back and the girl failed to listen to me & kept saying that they don't do free returns, contrary to what her colleague said. I then reached out on FB to see if I could get an email that someone would actually read and respond to & a day later and still no reply. This was my very first experience with this brand & I couldn't be any more disgusted. Be very wary, particularly those placing from Canada.

Saks OFF 5th - item shipped to the wrong address twice

My order is shipped to the wrong address (different from what I had in my shipping address). And I called, they said the courier returned my item to the Saks off 5th warehouse. 3 days later I received an email saying my item is shipped to the 'corrected' address, which is also wrong! I understand this is black friday and there are large volume orders to process. But this is such a rookie mistake. It's unbelievable.