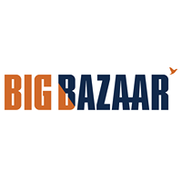 This a not a complaint, but its a complaint... A Techie's bad {really bad customer service} experience...

While Big bazaar claims that they have the least price for any product, that price may just be for display. It may not reach the consumer at all unless you have patience to verify the bill. My experience was with some offer in baby dresses, at their Udupi (Karnataka) outlet. In the bill I did not see the offer reflected, but the sales girl complained that it is the computer problem. what she did not know was I was in the business of building software for retailers and I know who is at fault :-). I called on the store manager. He too showed ignorance. Now i decided to verify the bill if I happen to go to Big bazaar again, and warned all my friends. You take care of that too!!

I am very dissatisfied with the service of Big Bazar. I purchased one Study Table on 12 May 2007 at the cost of Rs. 3699/-. Immediately after it was delivered, we found it defective and we complained over telephone. Since they didn't send any person, I personally went to the shop and got my complaint recorded in their complaint book in September 2007. After that I again several times called them over telephone but they didn't care to listen to us. On 1 Feb 2008, I again went there personally and got in writing that they will send some person in one weeks time. But till today there is no action from their end. This is the worst kind of customer care I have ever experienced. I want complete refund of the amount I paid for the defective table they supplied to me.

It was the only piece available,with few loose screws.and that they said they technical person is not available to fix it and offered me some discount for that,hence i decide to pick it, even though it was an expensive piece. I had taken the tricycle home and started fixing the errors and found that none of the screws and nuts was not of the same tricycle,also found the rear handle bar(which come separate) dosn't belong to this cycle.

Next day i went back to the same place and spoke to the same gentleman(his answer was quiet funny)he said,sir the handle is lying some where in the store and will take time to search,thats y he gave me the handle of some other cycle believing it will suit,also he collected my no and said he will call me in a day or two with the original handle bar,but nothing happened till this day.

Today(30/10/2007) i was amazed to see a same brand tricycle in a different shop,which is having more accessories on it.i spoke to the shopkeeper and learned that,all of it come as a single unit.But by believing the brand "Big bazzar" i have now a expensive tricycle ,"which is in-complete".

The "Big Bazzar "is truly showing their real character of bazaar(market). They r not really bothered of the quality & shape, of what they r selling.

The Big Bazaar outlet has managed to convince me never to shop at a big bazaar ever again and not recommend...

excess use of plastic

I have a serious concern on the amount of plastic used by these vendors for packing their products. I stay in Pune, Maharashtra. Recently I visited the new retail shop "More" which is franchise outlet. I saw that they pack each an every vegetable in a different polythene, take a plastic sticker for the weight and bar code information and stick it on the plastic. This is done for all different kinds of vegetables. I insisted the worker there to put as many items as possible in one bag, she refused saying that it is against their policy. This is ridiculous.

Some days back the local vegetable walls who sell on the road sides were fined 500 Rs for selling the items in polythene. But there is no limitation on the Retail Malls. This should be stopped immediately.

It is tragedy that I went to big bazar to buy a computer table two weeks back. They gave me a packed item and they told that, fitters will come and do the fittings within 2 - 3 days. I am still waiting and already this is second week and nobody turned up. After waiting for 4 days I thought let us open and try to assemble myself. Unfortunately when I opened the the it I found two damaged pieces in the item. When ever I am calling they are telling that, already they left for fittings or they are on leave or the item which has to be replaced is out of stock.

Be careful when you are purchasing the furniture from Big Bazar or don't purchase.

Big Bazaar Hyderabad is not good the logistics of home delivery of right goods. I bought a Sofa set, which they did not deliver on time and as they came delivered with wrong product. When I called them, they always assured that another hr time they will call back and that 1 hr never come. All they do false commitment. Normal shops always deliver as promised as they need customer good will. For BIG BAAZAR it does not matter as people are crazy.

delivery not on time!

Big Bazaar is not mature enough to run the logistics of home delivery of goods. Buying products you can carry...

Big Bazaar / Future Group
0
%
Doing nothing would be this company's favorite pastime, if they had the energy for it.