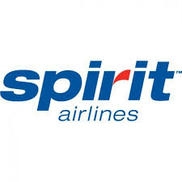 Having problems with Spirit Airlines?

Recently booked a flight for my wife to fly SFO to Detroit on 6/24 and return on July 17. I mistakenly thought the 24th was Monday and late Sunday evening on 6/24 realized my error. I called Spirit, listened to their "Your call is important to us" message for forty minutes and then was told the following. Because the flight was missed, the ticket charge is non refundable and I have to pay again for the return flight on July 17! I am willing to pay for my mistake but why should I have to pay again for the return flight which is several weeks away? I was told that is because it was booked as a round trip on one record. If I had booked them on separate transactions and paid for them separately then the return flight would still be good. That means she is returning from Detroit on the same plane in the same seat for which we have paid twice!

A lesser complaint is about their new baggage charge. If you pay for it on line the fee is $5 per bag per flight; at the airport you pay $10 per bag (up to two bags then it goes way up). However all attempts to prepay on line fail due "your credit card can not be accepted"; even though it is the same one used for the ticket. Other valid cards also fail. They admit to having a computer problem causing the card rejection but say you still have to pay the higher fee at the airport! I have already booked other Spirit flights to and from Detroit in September but they will be our families last on Spirit, even though they are the only non-stop available SFO-DTW; and even though my wife is partly disabled and has trouble changing planes in Denver etc. we will do it instead of flying Spirit.

I will never fly Spirit Airlines again! Although my family and I have used Spirit for over six years and are...

Responded to an internet special deal to fly to Detroit. Received an immediate confirmation after booking and reminder confirmation the day before the flight was due to leave for Detroit. We arrived at the airport for the trip only to find no one at the Spirit counter to check us in. We called the 800* number and reservation clerk told us that the flight was to leave shortly. We told her we couldn't find any Spirit personnel. She went off line, called the airport and came back and said the flight had been canceled. We were shocked! What horrible service and what a major inconvenience and disappointment for us. We will never ever consider Spirit and will recommend to everyone to stay away.

I will never patronize this airline again!

Spirit airlines should be investigated and possibly fined for their sell and cancel flight practices. After making reservation form LA to Grand Cayman, paying for the flight and booking hotels in February 2007 for travel in May 2007, the airline decided to cancel the flight.

There was no advisement sent to my home address, and it was only after I contacted the airline to reconfirm 30 days before the flight that I became aware that they changed my flights by two days without my permission.

After requesting a refund, it has been almost 30 days and the airline has not refunded the amount over $1000. to my credit card. What they DID do is refund the travel insurance almost immediately. I lost money on the non-refundable hotel booking typical for Cayman island reservations.

To refund a customers money based on involuntary flight cancellation does not require a degree in rocket science. Spirit earns money on the interest on my money, while I pay credit card interest. I don't believe I am alone, and if one assumes thousands of others had the same misfortune, it makes a bundle in ill gained profit for this inferior carrier. This may be on the edge of being legal, but it is immoral.

Spirit airlines may offer cheap flights, but their ability to provide customer service is atrocious. I will never patronize this airline again even if they offer 1 cent flights as they engage in suspicious practices, not to mention they all but ruined a planned dive vacation in the Cayman islands.

I have been watching Spirit Air for months since they bilked me out of $900...they always run ads like the...

Spirit Airlines
1
%
Doing nothing would be this company's favorite pastime, if they had the energy for it.