49 complaints
4 resolved 45 unresolved
File a complaint Table of contents
Claimed
This account has been claimed by Nivea customer service / representatives through our verification process.
Click here to get notifications about new complaints of Nivea. We promise not to send you any unrelated messages
Click here if you’d like to unsubscribe from notifications about new complaints of Nivea
Share
ComplaintsProfile
ADVERTISIMENT
Resolved “nivea fresh for men”

I have been using Nivea cream for a while and only recently started using it on my face at night more consistently. I started itching on my neck and didn't put two and two together right away each time I used it. I put some antifungal on the area it not knowing exactly what was causing it. I used it again and I had the same reaction just a short time after using it. Same spot. I took a benedryl this time. I've always trusted Nivea because I never felt burning after using it and it makes my skin so soft. Super disappointed!

This product is manufactured in Thailand and I believe must be exported from here, I purchased the product from Top's Supermarket Bangna after being with another competitor brand for many years. I used the product for every day for one week and noticed that each time there was granule like particles in the cream which didn't dissolve and the cream wa... 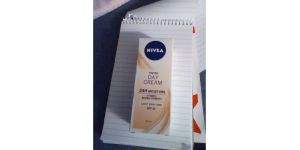 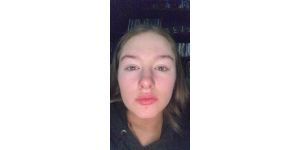 Nivea - Nivea daily essentials gentle cleansing wipes for face eyes and lips
Both my daughter and I used these and within 5 minutes eyes and face burning - eyes watering and blocked nose Bathed both our... 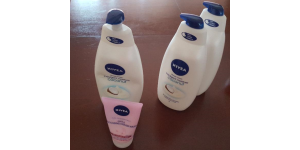 Nivea - Shower cream
Dear Sir or Madam, I purchased the 3 bottles of 1 Liter Nivea shower cream while they were on special at Coles Subiaco about few...
M
Mirrorbelle of AU
Jul 21, 2016 6:27 am EDT
Featured review
This review was chosen algorithmically as the most valued customer feedback.

I used Anti-Blemish 3-IN-1 CLEANSER my face & neck is now broken out into pimples everywhere and red dots it is very itchy & uncomfortable. My eyes are swollen red and itchy. This allergic reaction has stayed for 3 days and has not gone yet. I do not have sensitive skin never have i had a reaction to a skin product before never have i used this skin product...

I used Nivea q10 pore refining day cream recently. After two days I stopped using it as I had developed small pimples all over my face and neck. Then areas around my mouth and noise became red, dry, flaky and sore. I also developed a rash on my stomach. The doctor prescribed 0.1% hydrocortisone cream for me face which seems to be doing some good to around...

I bought the Nivea product earlier this week and tried it out. I came out in a very itchy rash all over my body and I had to attend a walk in centre as I was quite concerned. They told me it was a reaction and they gave me some antihistamines. After reading up on the Internet I can see that the product contains Methylisothiazolinone which I have read up...

I purchased Nivea Soft moisturising cream 200g on Thursday 18th July, applied to my hands and within 1 hour my hands had swelled and broke out in hives, I did not apply any further cream after this time and the hives are still there and now my hands are extremely dry with bumps all over, itching and generally uncomfortable.

I contacted the consumer relations team that morning and was put through to voicemail, I did leave a message but am yet to have anyone come back to me. I understand that they are not doctors and can not advise on how to take this pain away but I would appreciate the £5 I spent on this product back.

There is a lack of customer service representatives within the UK having been told it was a team of 3 for the whole of the UK, I called back and spoke to Receptionist and was told that as I said I have experienced a reaction I would be at the top of the pile for a call back, However there was a serious lack of interest in my complaint with no resolution offered other than "They will call you back when they can"

I tried to submit a complaint through their web site and after filling in all the fields the submit button didn't even work!

AVOID this company as much as you can, I was a regular Nivea user primarily deodrent but after this experience I will be boycotting the company from here on, mainly because of their lack of care or interest in one of their consumers.

The complaint has been investigated and resolved to the customer’s satisfaction.

Helpful? 0 0
Share
More
Send message
Copy link
Report
B
Boel of ZA
Nov 21, 2010 12:34 pm EST
Resolved
The complaint has been investigated and resolved to the customer’s satisfaction.
Featured review
This review was chosen algorithmically as the most valued customer feedback.

I bought Nivea Visage Daily Moisturiser Naturally Even For Normal and Combination skin. After the first day the side of my face was slightly swollen, my eyelid was drooping and my skin was red. After the second day's application it got worse. My neck was also itching and stinging. I immediately stopped using the product. The symptoms actually got worse and...