338 complaints
2 resolved 336 unresolved
File a complaint Table of contents
Claim listing
Is this your company? Claim it and get a lot of features. Read more
Click here to get notifications about new complaints of MWEB.co.za. We promise not to send you any unrelated messages
Click here if you’d like to unsubscribe from notifications about new complaints of MWEB.co.za
Share
ComplaintsProfile Q&A
ADVERTISIMENT

I have been on the phone since 8:15 toay till now I have call 7 times to this useless call centre and my call is either cut off or the person Im delaing with hangs up. I was notifed of a line upgrade to be active on the 1st August 2021 its now 1 September 2021 and my line hasnt been upgraded. I have been trying to find out why through this uselss call centre and have gotten tthrugh to the sales line who say they will arrnage a call back?

Desired outcome: My line to be what they say it should be or close my account

Terrible company! No flexibility to deal with real problems. Your staff take delight in not providing quick solutions to problems. So many levels of red tape you can't get anything done!

Our internet capped!
Tried to upgrade!
My husband out the country so doesent get pin on his SA phone.
Call center won't phone his UK phone.
We can't run our business
He emails them!
They still can't upgrade his account!
5 days of no WiFi
The most inept staff
Take pleasure in not solving the problem
We trying to give you more money! UPGRADE!
But your staff are invested in trying to stop us from having data…. There are so many hoops to jump through
And no supervisor to take charge
Absolutely disgusted

MWEB.co.za - Can you deduct the premium for my account and re activate the service.

My name is Siphiwo Mnqanqeni my i.d. no is [protected].My a dress is 20 abelia street Montclaire 7785. 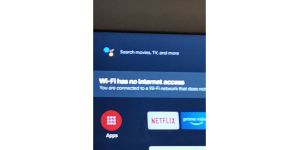 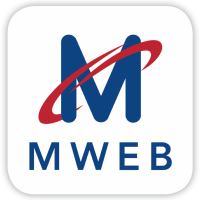 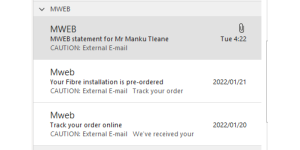 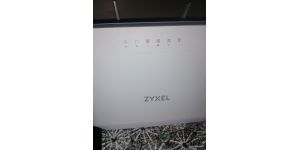 MWEB.co.za - Fibre internet
The internet has been off since Thursday afternoon, I phoned technical support, but not getting that much help. It is Friday...
M
Monzy of Beyerspark, ZA
Aug 19, 2021 4:53 am EDT

Morning, i am a new customer, have the fibre line for 19 days now and it has been off for two days now. I am not happy with the service i work from home and must have connectivity. I heard from people that Vuma seems to gave connection problem hear in Boksburg area, this is a huge problem for me, i cannot work with the interruptions. Perhaps I can move to TT connect

I have been having poor to bad to no internet service for two days. I logged online query and also spoke to a technician from mweb who told me that the problem is with my area I live in and that they are looking into it but cannot say when it will be fixed. I enquired with my neighbors who has the same service and they aren't experiencing any problems. I'm confused why only I am having no internet service and no one calls me back to keep me informed as to what the problem is

So to start of I have to say, that I am so disappointed in myself for choosing Mweb as a Fibre provider, and I mean choosing a branded company that everyone knows about seemed like the right choice to make at the time. The day I put in my request to start a contract with them is about almost a Month now already, the lady that sold the contract to me wa...

MWeb/Fibre Installation was confirmed for 28 July 2021 and appontment confirmed for 07h30 am. The technician from Brightlink (MWeb partner) called that he will only arrive at 09h00, which I agreed to.

1. The technician arrived after 09h00, however I already received messages from MWeb that the installation was completed and that the line is activated.
2. The technician was not able to get the fibre line to my poroperty and I have no fibre installation, let alone an active fibre line.
3. The technician informed me that in order to get the line to my property (over about 50 meters) I would have to have the road dug up and paving and lawn over 3 other properties.
4. I informed MWeb that I cannot authorise this in the complex and if they cannot get the line in to my property then the order must be cancelled.
5. MWeb proceeded to debit my account on 30 July 2021 for the first month subscription (Not even giving me the discount as per the advert) without an active line.
6. They now want to charge me a cancellation fee as well.

How am I expected to pay without an active line.

Desired outcome: Either MWeb get me an active line and provide me with Fibre or they must cancel the order

I have originally thought MWEB was the best service provider. Until yesterday. This is now the 3rd incident within a year that the fibre line has been defective. I need to be able to work from home but was told that it will take 3-10 working days before they will be able to fix it. I've been told that Openserv doesn't work over weekends and they have a SLA with MWEB to only work on weekdays. I have a SLA with MWEB to supply me with my fibre product that I pay religiously in advance. I don't care whith whom they use to deliver a service but MWEB is not keeping up their side of the contract I have with them.

I made contact with Mweb as I have moved to a new area.

In the beginning all started off well.

Router arrived and Openserve came along but where unable to open a line. Was told The municipality would get that done.
After some time and many call later. I am still sitting without the router being installed.
I have called a number of times. Left messages that someone would call be back. Still waiting for someone to assit me.

How much longer am I going to wait. I desperately need wifi because of my business and personal matters.

I just want wifi.
Cany seem to log onto your site either with the user and password.
[protected]@gmail.com

Desired outcome: To have wifi

Hi I have an active account with MWEB since 08/07/2021. But no internet because they have not provided an ONT box as promised. Now they are also billing me for a service I do not have and refuse to cancel it.

MWEB.co.za - Speed test is ridiculous and wi-fi very slow between 7 and 9 in the afternoon

Hi I have a concern with my speed test and can't access my server at home during this time, can't play online gaming I get kicked out of servers due to this problem. This has gone on for 3 weeks now and I have log a querie online but no one reply back to resolve this problem and it's between 7am and 9 am my wi-fi is very bad.

please will someone be able to contact us and advise how we are able to resolve this problem as this is costing us business.

As a result I cannot talk to an agent as I have to key in my old number. I am very dissatisfied with your service.

Desired outcome: Change my number on your system please!!!!

My signal has been downed from 9.30am on the 5th July 2021 . I phoned MWEB technical support and could not resolve my issues and I was told a turn around for queries is 2-6 days. I am working from home and my daughter is writing exams. I requested the technician to speak to a manager and she gave me all the excuses. And after a long time, agreed

Wow, the level of bad service puts mweb in a class of there own!Applied for Fibre 25/25 uncapped, All went smoothly, i even received my router, but that is where it stopped, I was told within 14 days i will be live, 14 days came and went, I probably made around 25 calls to mweb, with no help from them whatsoever!I was told that ifrastructure was not available, which was not true as i contacted openserve and they confirmed it was live in my area, I contacted mweb and they said not to worry they will sort out, I did not hear anything from mweb at all.my calls was either cut or the person i was dealing with was either rude or was not compitent enough to escalate my problem, I asked numerous times to speak to a manager and was put on hold only for the call to be dropped everytime,
I eventually after all this time manage to cancel the contract with not even so much as a sorry, What a terrible experience!

I am Paying for 200mb up and down and suddenly get 20mb upload that is showing on my online profile as well. Log a ticket and try to contact helpline which either cuts you off or just get send back to automated answer service.

Order was placed on the 7th of June today is the 2nd of July and we are still waiting. Anthea does not even return our calls. We have cancelled our service provider a month ago hoping to be connected by now and as at today we have spent a lot of money buying data for kids who are doing online lessons because MWEB has delayed connecting us.
Surely if MWEB cannot connect us it better to simply tell us and not waste any of our time. We cannot even work from home because we are not connected.

Desired outcome: Connect us as soon as possible and refund all the money that we have wasted buying data

My internet fibre hasn't been working for the past two weeks, and I've called technical support multiple times but couldn't get help.

our mweb via vuma fibre keeps dropping out . this has been going on for month now.
We have three ticked no from vuma yet nobody has contacted us or solved the problem from mweb or vuma.Yet the tickets are closed. ie no 492601.
Mweb and Vuma have our contact detail yet no follow up or repairs effected.
The technical help center keeps telling us vuma will sort the problem yet nothing is done
The only thing working is the debit order ; delivering on the promised service is dismal. time to change.