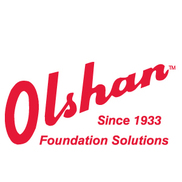 Having problems with Olshan Foundation Solutions?

I live in central Mississippi. I built my house in 2001 I saw cracks starting to appear in my brick and...

Nov. 16, 2016 Olshan Foundation tech came out. I had to wait two weeks for this appointment. He said he would email me the estimates the same day or no later than Nov. 17. Never received anything and I have been calling for it. If service is this poor I do not want to do business with Olshan Foundation. And after having had read the horror stories of others, maybe this was the best. It is always good to get at least three bids and I wanted Olshan Foundation since I have been a customer of Olshan Lumber for many years.

I feel scammed. In 2005 I had Water Lock system installed in my home. I have not heard my sump pump kick on...

When Olshan dug up the driveway at my mother's house (Aug 2009) to install one of their pilings, they...

Olshan lied to us, has caused so much severe damage including cracking our slab now, and had Brad Boren call, threaten we take our money back now and sign a release or they were "walking" he said and no money would be paid. We have 5 blank contracts filled with lies they tried to get us to sign. You better check your home and see what damage they did and how they breached their own contract, deceptive trade practices and more. They stole my tools as well and promised 7 times now to send me a check, I still have no check. My home is damaged bad by Olshan. Ed Mays [protected]@yahoo.com we need a good Attorney Olshan has ripped us off and refuse to make it right. Olshan should be sued and shut down by the Attorney General

Foundation repair performed in 2009 failed. Approximately 2 years after the repair, removing the finished...

Initial installation of piers were done and when Olshan lifted the foundation they "overjacked" the same and...

The complaint has been investigated and
resolved to the customer's satisfaction
Resolved Olshan Foundation Repair — Fix it and Forget - YOU!

This is the most impersonal company and process I have ever experienced. When you call they send out a...

I have contacted the office several times and have requested that the seven pilings Olshan placed under my home be checked and manipulated as needed since I have sheet rock pulling away from the wall above where several pilings were put in several years ago.

Someone did come by. He did not do any measurements nor did he look at the sheet rock issue, but told me I needed 6-10 more pilings (at $1100 each). That was a couple of months ago. I requested a quote for 3 new pilings but received a quote for 5 or 6 (don't remember) and I asked for a new quote with the 3 we had agreed on. I never received this new quote.

I ended up going with a new organization since I couldn't seem to get a good response form Olshan. I still want the old pilings measured and tested to ensure they are doing a proper job since I have new issues with the sheet rock. I was informed in a not so nice way, that someone would get in touch with me within a couple of days to set up the appt but there was no way anyone would be out to look into the pilings for several months. It has been a month and I'm still waiting for someone to contact me.

I must admit that I am very disappointed in the organization and the customer service I have received. I called Olshan first because that was who had done my previous 7 pilings. Now I wish I had used a different company to begin with.

Not happy with this company at all! We purchased our home 3+ years ago and the previous owners had work done...

Claim foundation repair is for liftime, at cost to customer if repairs are needed later. When called about...

Olshan installed 36 cylinders in 2001. 2003 house shifts and caused pipe break 10 feet under home (rear bathroom). 2006 house shift again cause pipe break and pipes re-routed. 2010 called representative out and he lied on observation of movement ( lot of cracks re-open and new). 2011 called representative out again and he gladly identified there was movement because there was much damage and major plumbing damage in both bathrooms. The plumbing repair in 2003 has broke again. After much research the major house shifts due to faulty cylinders which Olshan is aware they have has caused much damage to my house inside and out. Olshan will not comply to the liability of the cylinders shifting and not holding up. Due to the lack of response to correct the problem, the damage is great and all because Olshan has handled this very unprofessional and without proper etiquette. Olshan wants to re-lift my home without fixing the plumbing problem that their cylinders has caused damage. Olshan said the cast iron pipes broke and caused the house to shift. 2003 the rear bathroom pipe was replaced 10 feet under my home which included the bathroom by 5 feet. It is evident that Olshan is liable and refuse to act on their responsibility. I have posted a video on You Tube stating..(Olshan has screwed up my home do not let this happen to you). You can see the visible damage for yourself. Thanks!

Olshan came out, dug our foundation twice. This was based on a warranty/guarantee that was represented in our home purchase agreement. They tell me now, after breaking an appointment for a rep to come to the house last week, that 2 guys quit and they can't make it. A guy called me, that was at my house last week telling me that I had to produce the paperwork because the guy that was supposed to show up had it. Then he told me that he was in fact the guy that was supposed to show up and that it was not under warranty and go see the seller. This was after they already came 2 times, dug up the foundation and tried to seal it with some blacktop sealer. Now it's not their responsiblity! WHAT! RUNAROUND MUCH?????
BE VERY CAREFUL OF THIS COMPANY AND THEIR STORIES!!!
DO NOT MAKE APPOINTMENTS WITH THEM!!!

Olshans Plumbing — Say no to them

I needed a new water heater and of course I needed it immediately. I used Home Depot installation services and they sent Olshan's Plumbing. They did a good job. However, they were more than very expensive. The price just kept going up and up. $11.25 per foot for pvc pipe (I needed 20 feet for the overflow), $125.00 just to go under the house. My $600 water heater wound up costing me $2000.00. Do not use these people. Their mark up on parts is incredible!!! Did I mention not to use these people? Daddy said never say never, but Dad, I will never use Olshan's Plumbing again!

We own an antebellum home, Ash Point Plantation, built in 1880, located in northeast Louisiana near...

I am writing this here because I wrote Ol'Shan's marketing department a letter a few months ago...

I am a customer in Charlotte NC. We had some work done by Olshan more than a year ago. 4 piers and some crawlspace work.

When adjusting the 4 piers placed under the foundation itself, they raised it too high. It cracked my walls and almost broke the windows. When they hired someone to fix it, they wouldn't pay him to paint, only drywall the cracks that they created.

I had requested when the last warranty work was done, that a concrete pier be mortared. Instead it was removed and a loosely fitting jack put in it's place. I mean, just feel free to do what they want and ignore me guys.

When their man came out the last time, he pointed out some mistakes himself, that included the improper use of shims. He said he would fix it, but never did. When I called, no one ever called back.

This time, I needed some adjustments and some more work done, so I gave them a call. Figure I might get some of the stuff they missed last time while they were there. Since I said I knew there would be a charge, someone called me back. Imagine.

But they no longer work in Charlotte, I called another company that does.

The 4 sunken piers seem to be fine, but the work that they did underneath the crawlspace has not held up well. They had to readjust it about 4 times themselves during the 1 year that they warranted it.

After pointing out the problem areas to the person from the new company, he explained the errors that their installers had made. His observations made a lot of sense, and I started to realize even more so, what a shoddy job they did.

i.e.: On some of the concrete piers under the house, there are as many as 8 to 10 metal shims stacked up where there should be treated wood, and a couple shims to cover that large of a gap.

And, there are jacks used in areas that needed concrete piers, and some of the concrete piers they did install are dry stacked, no mortar at all. And 2 X 10s were not used where they should have been.

Basically, this would never pass a housing inspection.

Whether or not we'll file a suit, after having to pay another in the event they do not do the repairs, is yet to be determined.

Misrepresentation of service and in advertisement of same. I called Olshan for foundation repair based on...

Olshan Foundation Solutions
67
%
This company definitely cares about its customers and responds to overwhelming majority of complaints.