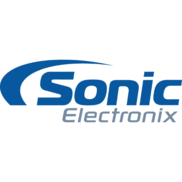 Having problems with Sonic Electronix?

ComplaintsBoard.com is not affiliated, associated, authorized, endorsed by, or in any way officially connected with Sonic Electronix Customer Service. Initial Sonic Electronix complaints should be directed to their team directly. You can find contact details for Sonic Electronix above.

Use this comments board to leave complaints and reviews about Sonic Electronix. Discuss the issues you have had with Sonic Electronix and work with their customer service team to find a resolution.

The complaint has been investigated and
resolved to the customer's satisfaction
Resolved Sonic - Tupelo, MS North Gloster — Stealing and Overcharging

Over the past two months, I visited the same Sonic 8 times. I've ordered Blasts and have been...

Do not use this company. SonicElectronix is a scam. I was sold a Jensen unit that used and not new. After...

I bought 2 Silver Sonic XL for my husband who is only 42 It don't work. Totally crap. Then I noticed...

Do NOT oder from this company! Their prices are low only to hook you into providing payment information. This company is rude, intimidating, and unprofessional. I ordered the Rebel XSi and received an email to call to confirm the order. After taking my security code from the credit card, the saleman pushed additional products, was sarcastic and rude when I asked questions, and refused to give me his name or pass me off to the owner of the company. He wouldn't hold the order or cancel it without charging a restocking fee, even though the camera had not yet been prepared for shipping. He continued to pressure me into buying products with which I was not familiar. During the second phonecall I made to try to talk to another individual, the same man hung up on me. I submitted a complaint to the BBB. You can visit the New York BBB website to read about all the complaints this company has received.

First, look at Better Business Web site and then look at the 'RipOFF' web site below which is full of complaints on Sonic Camera: http://www.yelp.com/biz/sonic-cameras-new-york

Never, ever, ever, order anything from this company. They advertise incredibly low camera prices and then invariably refuse to sell what you've ordered online. They use extreme 'bait and switch' tactics to try to sell a different brand at an inflated price. They tried to tell me that Canon 'L' lenses (professional grade) had distorted glass, a plastic housing and broke frequently and that a Sigma Lens was the only one that had a metal housing. I insisted I wanted what I ordered (Canon lens) and was told it was out of stock. I said I can wait a few weeks. I was told it would be 6 months before another would arrive and that the price would double by then and that it would cost $50 for a lens hood (they come in the Canon box for free). Terrible CROOKS and LIARS that should be jailed.

As other posters have mentioned, this company runs a blatantly illegal bait and switch operation. Received a "confirmation call" a few days before Christmas and was told a Nikon D40 I purchased "did not come with a battery and not buying an extra battery would be a serious mistake". Sounded like garbage, but was told the camera would not be shipped without an additional battery. I agreed under protest, thinking I would later return the extra battery. As it turns out of course, the camera did come with a battery, and we were lied to as expected. Furthermore, an enclosed invoice contained no phone and no reference to "Mark" who sold the camera. Call inquiries to complain have resulted in hang ups after some weak attempts at intimidation (we told the person onthe phone point blank we would contact the Astoria, NY police and report fraud/theft.. which backed them off). To boot, the device they sent me is licensed for sale abroad and we suspect the camera is a knockoff. We will be filing a formal complaint with the NY district attorney's office, as well as canceling the credit card charge and changing our credit card number. We have no doubt these thugs would try to recharge us after a dispute.

In short, do not do business with these people. They will likely be charged with criminal conduct soon enough.

I recently order a Nikon Camera and lenses online from Sonic. After not receiving a confirmation email, I called the company. They asked for the CCD from my Credit card (which was reasonable). Then they went into their sales mode. They wanted me to pay $135 for the EN-EL3e that would normally be packaged with it from Nikon (retail is about $40). Then they wanted me to buy memory (2GB for $80) and an extended warranty. I declined. They completed the order (or so I thought).

A couple of hours later, I received an email stating that my order was canceled due the item being out of stock but that they would contact me when stock came in if I wanted to reinstate my order. I suspect that since I did not purchase all of their add-ons that they canceled my order. I say that because the camera still showed available on-line. I ended up buying my camera from a more reputable source (at a much higher price).

The complaint has been investigated and
resolved to the customer's satisfaction
Resolved Sonic Cameras — Scam and thieve!

Sonic Electronix
38
%
This company is on the right track to keep up with incoming complaints, but there's still plenty of work to do.