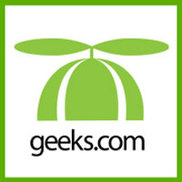 Having problems with Geeks.com Store?

I have been shopping on geek, wish and cute applications on my iPad for almost a year. Every time an item...

I have tracked this order almost every day, I took screen shots of the order number I provided above and the ratings on this were very good 4 and a half stars, and now it's went down to 1and a half and showed information about the product and now it shows nothing, I even contacted 17 track and ask for product information on the order, and as the rest of the ratings say Beware this is a scam I'm nervous because I have received a letter from my bank account about unauthorized activity on my account of payment method.
Can you look into this before I take any action with my bank, I'm not try to make this sound bad the letter from my bank concerns me.

I've placed an order with Geeks and when I received a confirmation message I found out they charged me twice for one and the same order! I immediately contacted customer service and told them about what happened. They said that they were not able to cancel my order because it was already in transit! Impossible!! I contacted them 15 minutes after I placed my original order.
They said that I can send one item back after I receive it and then they will issue a refund! So I will get two items and will waste extra money on returning on item back! Great!

I bought a wireless IPCAM model APM-J011-WS a month ago from geeks. It worked fine as long as the ethernet cable attached but would not work wireless. Strange it has antenna on it and is advertised as wireless. I sent it back for a refund which I did get. I ordered and received the outdoor model APM-J901-Z-WS. The box was plain white and the camera again had no make or model on it — only on my invoice. This camera also is supposed to work wireless but does not.in a search for APM-J901_Z comes up with Apexis camera that loks just like it antenna and all but if you look at the specs there is no mention of being wireless. This can be seen at: http://www.apexis.com.cn/en/productsdetails_183.html. The only thing geeks knows is replace or refundbut the camera is a fake knockoff. I am sure if replaced I would just get another counterfit product. This is fraud!!!

devices do not work

A few days ago I bought two USB PC to PC cables. They are used to transfer data from one computer to another.
On the internet I found geeks.com. Since most of computer related products do not work properly, I bought two different devices... hoping that one of them works. If this would have been the case, I would not waste my time telling you my story.
Anyway, both devices do not work... not on XP and not on Vista, They do not work on 3 different laptops and 2 desktops I tried. One device (BAFO BF-7313) suppose to come with a install CD... there was none, so I downloaded drivers from the BAFO web-site... installed them and get the message "driver not found". Device Manager tells me that the "Device is not functioning".
The other device is called "Smart PC-link" and it has the drivers internally. Does not work either.

Just in case, you may think that I am just too stupid... I am an Electronics Engineer.

Geeks.com sells garbage from China and Taiwan, forgets to send me the driver CD and then patronizes me when I ask for technical help... Their support web-site is computerized and does not allow me to send my problem description unless I click a box which says: "Have installed driver?"

The problems with computer related products are out of control. Even big companies like Microsoft cannot get it right... see Vista, and a lot of bottom-feeders like geeks.com make money selling garbage.

Recently I purchased a refurbished cpu at a cheap price and it works fine as advertised.
Then, I thought I should replace my 9 year old power supply and they had a really cheap one for $12.99 with $8.00 shipping. I should have known better! Everything about it is "cheap" and it doesn't boot my computer to where I can log in. I reinstalled the old power supply and it works fine. I requested an RMA through their website one week ago. No response. Plus they don't have a toll-free phone number.

Be sure to know that whatever you purchase may not work properly and that "you" will be paying the freight, restocking fee, and may not even hear from them when you request a return authorization!

Geeks.com is a freaking scam. These ### sent me a defective item and did not compensate for it. They gave me my money back after weeks of complaining, but did not compensate for any of the shipping at all. I kept asking them to compensate for $22 lost due to shipping, but they simply would not. Like wtf? Is it my fault you gave me a ### item? No. THIS WEBSITE IS A ###ING SCAM AND DO NOT DO BUSINESS WITH THEM.

Ordered 2x a logitech universal remote. Both supposedly 'refurbished'. Have bought refurbished products for years, I take it to mean a product sent back to company and refreshed back to new condition. Both remotes were nasty/dirty with food and sticky stuff and neither worked. Even if they were not nasty dirty, they didn't work, so I had to send it back and lost my shipping payment, even th0ugh they shipped something broken. When the second came and it was not working I said I wanted a refund instead of credit, and they said I would have to also pay to send it back. Never again will I use this company... What a scam. Buyer beware!! 1

Geeks.com has regularly advertised for years 'locals-only' specials. These supposed specials are for product...

the product was not what was described on the site

Geeks.com listed merchandise on their website as having certain features and specs. I receive the item only to find the specs are not accurate the item is far less than what I bought. After 2 hrs on the phone they agreed to take the item back. I foot the bill for shipping both ways they take a 15% restocking fee, and three weeks later my card has not been credited. They say they have not finished processing the return. This is unacceptable. I have never had this problem before and I order a lot online. This is the first and last time that I shop Geeks.com I suggest you stay away too!

Geeks.com Store
0
%
Doing nothing would be this company's favorite pastime, if they had the energy for it.