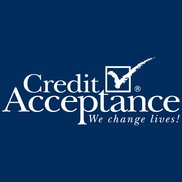 Having problems with Credit Acceptance?

Use this comments board to leave complaints and reviews about Credit Acceptance. Discuss the issues you have had with Credit Acceptance and work with their customer service team to find a resolution.

I was a customer at this bank. I have closed my account paid in full yet they still are pulling automatic payment even after I called to cancel it. I now have overdraft fees to my bank due to their negligence. I called again to resolve this and they stated that it was my negligence for not having the amount they were trying to pull even through they aren't supposed to be pulling it. Their response was their is nothing that they can do even though it's their negligence.

They have mo online account to look at. Nothing I set up auto payments throu WU as the only method. Came out...

These people are very unprofessional. They tell you the same thing over and over, sometimes they even make up...

No matter What you pay. they will get more out of you 1 way or another. and if you make all your payments and...

I had two suv's through them. Paid off one in 2013, this past october a car hit me and totaled my other suv. My insurance and gap insurance paid off what I owed left. This company reported my account as closed derogatory and that it was in collections and paid off. This has drastically reduced my credit score and trying to get this company to help me is obviously not working. They probably did this evil thing because they lost out on future interest.

You have a woman working for you named lashay she was very rude ad nast and had a very stank attitude also...

I make my monthly payments in full but due to some slow work I couldn't make the late fees for about three...

The complaint has been investigated and
resolved to the customer's satisfaction
Resolved Credit Acceptance — rip off, harassing phone calls

My ex-wife had my vehicle, under contract but in my name, and didn't pay for a few months. When I wa...

I am currently making payment on car that was fiance threw them . I had my repo several month ago n i got it...

I had an arrangement with credit acceptance in september to pay for a payment which was authorized by them to...

To begin, Credit Acceptance, the company that financed our vehicle did not send us a Right to Cure letter which is required in the State of Missouri. If this letter had been provided to us, it would have given us the 10 day opportunity to avoid repossession and the additional damages that we incurred at the hands of an Agent contracted by them to secure our vehicle.

Days after redemption payment had been made, we did receive a letter telling us our car had been repossessed and who to contact for information to redeem it, but nothing before the car was picked up.

County Wide Auto Recovery Services repossessed our car on 8/29/2012, redemption debt paid in full on 8/31/2012. An agent at County Wide told us when we called [protected] that we could not pick our vehicle up on that day because the office closed at noon and set an appointment with us for the following business day.

On Tuesday, September 4, 2011, We went to 1600 Heritage Landing, Suite 108 St. Charles, MO 63303 as directed by Credit Acceptance (finance company). We were told that we would have to pay $50.00 for possessions in our vehicle that they DID NOT STORE and to make matters worse, our navigation system, several car chargers, adapters and other misc items had been stolen out of the car.

The police were called and officer Liermann of The St. Charles Missouri police department was dispatched to the scene. A police report was taken but that is just the beginning of the legal action that we are going to take to expose County Wide Auto Recovery for their unethical, deceitful actions. The police officer who took the report also questioned the company owner about not completing an inventory of the items in our vehicle when they repossessed it. Their response was, because the owners were picking up the car, they did not feel as if they had to. We have also learned that the company does not have an active business license in St. Charles Missouri which makes our experience more disturbing.

Dianne Lyman is the owner of County Wide and has not heard the last from us! Any legal assistance would be appreciated in an effort to sue both Credit Acceptance and County Wide Auto Recovery services for their illegal actions.

Julie who is a legal assistant in the Credit Acceptance Legal Department has taken the high road, saying they are not responsible for the theft of our items and have tried intimidation tactics using email to quiet our complaint.

This company, the people who call you are awful the way they do business is terrible. If you get behind ONE...

This company was yes willing to help me due to my credit issues, but the finance charges are totally insane...

I bought a car through credit acceptance and what a bad decision it was. i had my car a year and i have already had a new transmission put in and thats was just after having the cartr for a month. i have had my starter replaced three time. my engine has been leaking oil in three different spots and my fuel pump is gone out.

These people have no feelings for you at all, especially if your are having a difficult time financially. I...

This company starts calling on your due date, 3-7 times a day, never knowing anything about your account when...

Credit Acceptance
44
%
This company is on the right track to keep up with incoming complaints, but there's still plenty of work to do.