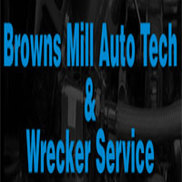 File a complaint and get it resolved. Itâ€™s quick, effective and absolutely free!

AAA dispatched Browns Mill Towing Service to come out for roadside assistance for a flat tire. Tow truck driver called and said he was on his way. One and and half hour later no tow truck driver. When trying to call him back on the number that he called on all that happened was a recording saying that the number was not a working number. AAA was called a second time and connected me to the towing dispatcher who said that the driver went to the wrong location and blamed that on AAA but said that the tow truck driver would be there within 15 minutes. It was explained to the dispatcher that after we had waited that long with the vehicle running that the gas tank was almost empty, in 20 degree weather with snow falling. Upon arrival, the tow truck driver said that he would not get out of the truck because it was too cold and he also stated that he could not assist because his air tanks had no air in them and he had no gas. The tow truck driver was then asked if he could tow the vehicle on his flatbed to a residence approximately 3 miles away to which he responded that the roads were too icy. It was explained to him that we had just come off of the road and that it was not too icy but he still refused to tow the vehicle. A call was made to Browns Mill Towing Service but nothing was accomplished with that call other than the man who answered the phone told me to call AAA and report it because he had been doing this for 40 years. After arguing on the phone with the dispatcher for Browns Mill Towing Service, the truck was driven to the residence on a flat tire with no problems from the so-called icy roads. The tow truck driver simply did not want to help and was more than likely ticked off because he had to come out on a call and it is very clear that the owner/operator of Browns Mill Towing Service is not interested in offering roadside assistance but he/she is only interested in making the money that AAA pays for each call that they take from them. It is recommended that if you are in the Johnson City, Tennessee area and have to call AAA for roadside assistance that you request that they not use Browns Mill Towing Service.

Brown’s Mill Towing & Auto Repair
100
%
This... this rating shouldn't even be possible. Not every mother cares about her own children how this company cares about their customers. Perfect!