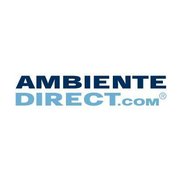 Having problems with Ambiente Direct?

ComplaintsBoard.com is not affiliated, associated, authorized, endorsed by, or in any way officially connected with Ambiente Direct Customer Service. Initial Ambiente Direct complaints should be directed to their team directly. You can find contact details for Ambiente Direct above.

Use this comments board to leave complaints and reviews about Ambiente Direct. Discuss the issues you have had with Ambiente Direct and work with their customer service team to find a resolution.

Ambiente Direct — Bad customer service - do not buy any products

Update on 01/07/2020 No update on the bellow. Still waiting for missing part of my sofa being delivered to my...

Ambiente Direct — package shipped to incorrect address, could not get a refund

Contacted customer service on July 17th 2019 for replacements, package then shipped to incorrect address (in Ireland)

Contacted customer service on July 25th to reroute package to correct address in the UK, but was told not possible

Contact customer service on Aug 22 for refund on cost of shipping (sending package from Ireland to the UK), was told NO

I wanted to buy a Zanotta William sofa, & Ambiente Direct were a bit cheaper than getting it in the UK & were...

Ambiente Direct — sofa I bought with delivery time 3 weeks, 7 weeks have passed and no news

The complaint has been investigated and
resolved to the customer's satisfaction
Resolved AmbienteDirect.com — Terrible customer service, they should fire people or maybe management

I keep complaining about this company. The service is a disaster. Calls that are international are being disconnected, emails no answered in time, cancellations not allowed. And i can keep going. I have been emailing with and has not helped even once. The people over the phone have no access to the data of your order or the log of former calls, email threads etc. Its useless to call them and email them because they say different things. I have no idea if its just terrible employees or the management itself that oversees all. Its a terrible company

I bought wardrobe and table set from www.ambientedirect.com. The colour of wardrobe was white with red chests and the table set was light brown. I got the confirmation from the seller. I received the email that they would confirm the delivery time and would send the tracking number. After this email, I heard completely nothing from the company. I called and left messages, but the company kept silence. Any ideas what to do next? Please, help me.

AmbienteDirect.com — they ignore customers too much

My experience on the website www.ambientedirect.com turned to be real nightmare. I ordered 2 beds with the mattresses and large set of coffee maker. I paid in advance for the order, because they provided the discount in amount of 5%. After that I did nothing from the seller. I called them and sent emails, because I didn’t want to leave the problem. Finally, I got the email from the seller, who asked me about the coffee maker. It was unavailable. I replied and asked about the other stuff. No reply.

AmbienteDirect.com — another scam, so be careful

I placed the order on the website www.ambientedirect.com. I placed the order on March, 23. After that I head completely nothing from the seller. I was so shocked and tried to reach this scammer in every imaginable way. The seller scammed me, but I have no idea how to get money from these thieves. Maybe someone can help or has the same problems with this seller. This company must be stopped. They are thieves and liars.

I already complained on another site and I will keep on doing it everywhere. If I don't get my furniture this week I will take legal steps. I payed more then 2000 euro, 2 months ago and still no news!!! I got 1 e-mail after a public complaint and then silence AGAIN! They apologized, promised me to send my order and send an e-mail when it's sent, but silence AGAIN after that mail. REALLY? I'M SHOCKED HOW THEY CAN GENT AWAY WITH THIS. AMBIENTEDIRECT IS THE WORST ONLINE SHOP. KEEP AWAY FROM IT. THEY REALLY SUCK. CAN'T BELIEVE THEY ARE STILL IN BUSINESS.

Ambientedirect.com advertises lighting at prices far, far below all other websites. I mistakenly fell for...

AmbienteDirect.com — non-delivery of item ordered and paid for

Don't make the mistake that I did and try ordering something from this site: they have my money and I do not have the item I ordered.
I ordered a Kartell Combonibili design storage unit from this site. The company is based in Germany. Their website and ordering process assured me that I would receive an efficient, quick service, and that the item would be shipped immediately. Two weeks later I received an email saying that it had been delayed, and the new delivery date was 5 December. I could track delivery through their carrier's website (DHL) (which I did). Two days later the item had not left Germany. After 5 days, it was in transit. On the Monday of the following week I learned from the tracking that it was in the depot in the UK (it didn't say where) and would be delivered that day. Naturally, I was out. No note was left and the website just said that my item had been returned to the depot and was 'awaiting instructions from the sender'. I tried to track it down via DHL but they said it was nothing to do with them, they were just a third party carrier. Since then I have emailed Ambiente for the last three days, asking for the location of my order. The only reply I got was that I could go and pick it up from 'the next post office'. I replied explaining just how many post offices there are in Edinburgh and that, in any case, I didn't think it would be there: did they mean a DHL depot? I have asked them with increasing desperation for the location of my item. I have had no reply, despite emailing at least three times a day. Each time, I have to start a new query and get an automated reply, but nothing after that. I have paid £65 for an item that I have not received, and the company obviously couldn't care less. I have repeatedly requested a phone number so I can make my own arrangements about redelivery, or even drive miles to try and collect it - but I don't know where the item is being held. I have never encountered such rude, careless, inefficient service.

AmbienteDirect.com — the people working in the customer service are incompetent and helpless

Very very bad experience. The people working in the customer service are incompetent and helpless. I ordered on 28.09 and still haven't received my items, which went back twice to Germany because they could not fill out toll papers properly. Incredible lack of customer service. I wonder how they are still allowed to sell their stuff over the Internet. Do not use this website!!

AmbienteDirect.com — information on the website is not reliable or even misleading

To be avoided. Information on the website is not reliable or even misleading. The items with on stock status are not available. Client service is poor. Recovery of your money is very difficult. You may always complain on them to the http://ec.europa.eu/consumers/ecc/index_en.htm or http://www.verbraucherzentrale.de/en/index.php. If a lot of people will complain maybe they will change their policy.

The complaint has been investigated and
resolved to the customer's satisfaction
Resolved AmbienteDirect.com — chair

Hello.
I got a fraud by a german interior Shop!
http://www.ambientedirect.com/en/info/general-information/trusted-shops

I ordered a chair to afurniture store named AmbienteDirect 3month ago. that was international shopping. I live in Japan tokyo.
[I cost more than € 3, 000!]
and they sent me a wrong color chair from what I ordered.
I asked them to exchange the chair.

they started to ignore me and they keep saying they can't exchange the product. I guess they are trying to run away from the problem.
I cant' go to them because I live in Japan.

as a review of them, there are many people who had trouble like me!
here is a link that complaints against the company.

before someone get another trouble, I want you to stop what the do.
I don't know what to do! please help me!

here is their infomation.

The complaint has been investigated and
resolved to the customer's satisfaction
Resolved AmbienteDirect.com — return policy

Be extremely careful with this site and the folks working in this company :
- Customer service is a shame (no answer, extra long delivery time - the ones announced are fake ones, you should count in weeks starting from 4 and expect to do that in month, no call back)
- Worst, the make mistake in the delivery (wrong reference) and then DON'T PAY YOU BACK THE COST OF THERE ERROR : i wanted to buy a Classicon Satyr Chair for 1890 €. They kept 100 € out of it, i suspect for transportation costs for there part but i never had any feed back
The worst customer experience i ever had over the internet.

The complaint has been investigated and
resolved to the customer's satisfaction
Resolved AmbienteDirect.com — they will take your money and time away!

worst site I ever had. you should never try this. the stuff named Chloe Dias &Verena Englisch are so bad.
they use your credit card while you don't know. they overcharge.
don't tell them your credit card number.
If you already order, you must cancel it as soon aspossible!!

Bought an expensive Artemide lamp here 6 months ago, which was delivered in damaged condition because of insufficient use of packaging materials + because the base of the lamp (heavy) was left lose inside the package.
In any case customer service (or the lack of it) has been a disaster and now 6 months later I still do not have a nice looking and fully functioning lamp...

This company simply lacks the basics of doing business online.

AmbienteDirect.com — be very wary of this online designer lighting and furniture supplier

Be very wary of this online designer lighting and furniture supplier. They will send you the expensive good...

Ambiente Direct
27
%
Not bad, but could've been way better. This company does respond, but not as often as you'd expect them to.