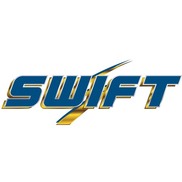 Having problems with Swift Transportation Services?

it could happen to you

I have seen too many drivers with truly bad attitudes. Also I am a mentor and I actually had a student report drunk. Due to the probable cause needs I had great difficulty getting him tested. I had to remove him for personality conflict for my safety. He reported drunk and due to the federal laws I was unable to get him tested easily. What this person is saying is absolutely unbelievble. I see drivers actually be highly obnoxious and unreasonable. Without more credibility and proof I would say the truth lies somewhere more likely to be he was trying to get going faster and was actually the problem. Swift has always repaired equipment I have taken into the shop but too many drivers want to make miles and fail to report equipment difficulties. I have been routed extra jus to repair equipment I see broken. I would like it if they followed up though on why the previous driver left broken equipment. Swift cannot fix what they do not know about. I have been there for 5 years and am doing great.

After being OTR for a month I went on hometime for my son's graduation. During this time the tractor I was assigned was taken out of service and sold I was told this by DM Vic Quintana, and TM Chris Ryan of the Albuquerque, NM Swift terminal. It was not until June 6, 2008 that I was called and told they had a tractor ready completely serviced, ready to go by my Driver Manager. I drove 178 miles to Albuquerque to go to work as I live in Northern Arizona. I was assigned truck #590094 a Kenworth model.

Approaching this tractor with my DM I noticed all rear 8 tires were close to being, if not, D.O.T. illegal. I was handed a sign off sheet that was made out before we both walked to the vehicle and the DM said sign off on the paper so He could get back to what he had to do. I got in, started the vehicle turned it off and loaded my personal belongings into it I noticed the weigh station pre-pass laying on the dash, DM did not know if it was activated. the Qualcomm had a large scratch across the face of it making it hard to read certain areas and came unplugged as the back-plate was missing.

Next I go to start the tractor and its completely dead with charging light on. I red tagged this vehicle to go in the shop as I decided after my pre-trip inspection this truck was not road ready. I received a letter of dismissal towards the end of June 2008 stating dissatisfied with job. All my phone calls were ignored by DM and TM, and now I am left wondering why Swift's motto is 'Safety First'...?

The one thing I want to put on here for someone who may be thinking of going to swifts training program i...

[For all those company people, i.e. Current Drivers, little girls in the office or anyone else currently...

Swift Transportation Services
0
%
Doing nothing would be this company's favorite pastime, if they had the energy for it.