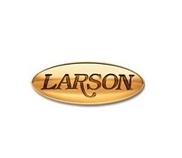 Having problems with Larson Manufacturing?

I purchased 2 Larson aluminum storm doors from Menard's and they both bubbled within 2 years. 2 10 year old doors are still fine. New doors they make are just crap. Have bought 8 Larson doors total. 6 older doors fine, 2 newer door bubbled and disintegrated with in 2-3 years. Stay away new doors are garbage. Appear to be painted aluminum foil over particle board total junk... No luck with warrenty claim, complained to Menard's. Will no longer buy Larson doors or windows.

Never will I buy or recommend a larson product! After ordering my door on aug 13, 2019, and waiting and...

I needed the replacement window and screen for the hide-a-screen storm door. Mine was built in 2006. The model was updated in 2008.
I ordered the parts. The first one didn't work because it wasn't the right one, I ordered 2 more, one for practice, one to use.
I spoke to support, she said she was sending one out free of charge. I never received it. I did get the two I paid for.
On installation day I had to call support because the new screen ends were not correct. I was told that I could no longer order parts using the serial number Required to order parts off my door. The kits I ordered are wrong! They are for the 2008 and later door.
Why there is not a webpage update stating there is a new model is odd. I guess people just don't keep doors long enough to need replacement parts. (I think Larson allows 10 yrs production parts.

So I am out the price of the initial screen and window. Then 2 more screen replacements that are no longer usable or returnable. I was told I would get the latest screen for free. (Not Free-I'm not a paid pro, this costs time and money for me)

I purchased a Larson storm door because I wanted a high-quality door that would last for years. I am disappointed. First the door handles started to wear badly the first year. I could live with that. The bottom of the door has started to flake like it has moisture inside it. When I touch it, it just peels off. It's more noticeable on the inside of the door, but I can see it crumbling on the outside as well. Because of this defect, I am going to have to replace my "high-quality" door before I can sell my home. I should have purchased an inexpensive no-brand door.

I purchased a Larson storm door a couple years ago. A contractor installed it and things seemed fine for the...

Larson definitely doesn't stand behind their product. I purchased one of their Larson Secure Elegance Full View Storm Door from Lowes for well over $300.00 and now two years later the closure has failed and they states that's not covered under warranty, actually based on what they are telling me with their so called Customer Service they stand behind very little on their doors. If someone knows of a better built storm door where they actually cover the parts for more than one year please let me know - I will not be buying Larson Doors anymore.

Bought brand new storm door, and within a month the storm slams shut as the essential part is not working...

They don't back their product. I was sold a door with a defective screen and they sent me a replacement...

I had a storm door handle break off at a rental property. Tried calling into a representative, but the Larson...

I custom ordered a Larson Signature Full View storm door from Lowes after discussing with the Millwork...

This is the second larson storm door that I have purchased. Both times the hinges gave out and fell apart at...

We have eight exterior doors with Larson storm doors installed. These were bought at local lumber yard...

Came home to my outside door flopping around, still latched. The 6 foot tall glass insert had simply fallen...

This is the worst screen door I have ever purchased. I have a screen which rolls up and becomes an all glass door. The first door's screen split along the bottom and when I called for a replacement, the company told me that I would get a replacement screen but I had to install it myself and it was was really easy. I got the screen, it had 9 pages of instructions and it was a two man job. I immediately called Lowe's to complain and they sent someone over and he told me that they sent the wrong screen size. He re-ordered, came back and told me the second screen I received was still the wrong size, upon which I called Lowe's extremely irate and they told me I would get a new door. Fast forward 8 mos and the pistons don't work properly, the door either slams like crazy or stays open halfway through AND from all the slamming, the glass has shifted and I can't latch it closed. I called Lowe's again since I told them when they re-installed that if anything happens again, I am requesting they replace it with a Pella- which I have in the back and works perfectly fine ( which is amazing since I believe it is the same company now). We'll see what happens but stay away from these doors.

Larson Doors — will not honor warranty

My experience was like everyone else's. Larson simply refuses to honor their warranty. They'll...

We purchased a Larson Door and installed it ourselves. It was one of the full glass doors, and one of the...

Larson Manufacturing
50
%
This company is on the right track to keep up with incoming complaints, but there's still plenty of work to do.