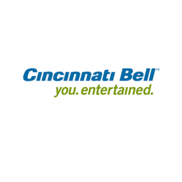 Having problems with Cincinnati Bell?

ComplaintsBoard.com is not affiliated, associated, authorized, endorsed by, or in any way officially connected with Cincinnati Bell Customer Service. Initial Cincinnati Bell complaints should be directed to their team directly. You can find contact details for Cincinnati Bell above.

Use this comments board to leave complaints and reviews about Cincinnati Bell. Discuss the issues you have had with Cincinnati Bell and work with their customer service team to find a resolution.

We switched from DirectTV to Cincinnati Bell Fioptics a year ago and have had constant problems with the TV...

I called into Cincy Bell to inquire about what my termination fee would be if I terminated my contract with...

I had Cincinnati Bell Fioptics installed in early September and have had nothing but problems since. I do not receive all of the channels I am paying for and my internet is also very slow. I have had 8 technicians out to my residence to "fix" the problem and I still have the same issues. I have called tech support and customer service countless times and each time I get a better story from them. I have been told to go to the bar and watch television, my cable can not be fixed, it is a network problem and the best one so far is "your microwave is the problem". I finally asked for a refund on my bill and was told once they have a solution they will reimburse me. I pointed out that in 7 months they have yet to be able to provide a solution so why all of a sudden now will they have a solution when I am asking for a refund. Customer service has to be located in India or Pakistan since you can not understand a word any of the people working there say. This is by far one of the worst companies to deal with!

Sales guy came to house sold me on the Fioptics plan with internet. I was told it would be $145 + taxes first month free then after a year it would go up $10. Received my bill and they added a $130 service charge and the monthly bill was $181.95!! Imagine my shock, I called only for the guy to say I can't do the price we promised but I will wave the $130 service fee. I said email me the information and I kept him on the phone opened my email and it was still the $350 + bill. WOW needless to say Im not paying any more then $145 + taxes and then I WILL BE CANCELING service and going back to Insight.

P.S. Three of my neighbors have had the same issue!!!

I worked for Cincinnati Bell/StarTek! Both of these companies are frauds! You never get your paycheck on time nor is ever the correct amount for the hours you have worked. They wanted me to lie to customers pretendiing to adjust their bill and downgrade services. Actually all we were doing was adding products to the customer they didn't need just to make their bill go down! We signed a contract in the office saying if we had system issues we would still be paid. That was a LIE!! I am not persuing legal action against both companies for breech of contract. BEWARE of Cincinnati Bell, they are fake! The have fired several Cincinnati Bell employees that have been there for YEARS so they could outsource sending jobs to Costa Rica and Phillipines paying less money to workers. They have teamed up with StarTek to hire people in at $9.00 and hour working from home. Because of StarTek and Cincinnati Bell, hundreds of people in Cincinnati have lost their jobs! The fioptics internet and tv are a joke. They work barely half the tme, I had several complaints from customers about that, and once you have fioptics you cannot go back to regular cable. I suggest Time Warner to everyone. It is a better cable company with cheaper and better packages. They also are not outsourced!! This place is a BIG JOKE!! BEWARE PEOPLE.. They are a scam!!

Cincinnati Bell Fioptics — selling a service and not providing it

I was told that if I switch from Insightbb.com to Zoomtown.com I was going to save a lot of money and I would...

I have dealt with cincinnati Bells hidden charges for over a year now. They have raised my internet bill by...

I had Cincinnati Bell's cable and internet service while living temporarily in an apartment after a fire at my house. Please note CB does not offer service at my house. When the service was installed, the installer hooked everything up including setting up the internet on my laptop. No modem was left with me but now I'm being charged $100 for something I never had. Anybody else have issues being charged for equipment they either returned and didn't get credit for or are being charged for equipment they never had?

Was sold the Directv Bundle with $100 rebate. I did everything as instructed. I am entitled to the rebate and the first denial was that I did not activate Directv. I sent them my Directv bill showing activated within the required time. Then I was approved again, then another denial letter, called again, approved again. No check, checked on line. The same thing with Directv not activated. I called again, the person acknowledges I am entitled. I still have all the Cincinnati Bell services and I doubt if I will ever get paid. Being a web developer, I think it is time to build a Wordpress website and enlist everyone that has been cheated and let others be warned through the blog. If I can solicit enough with factual information, it could be handled with a class action suit or at least through the Attorney General's office.

I having cincinnati bell wirless phone from last 2.5 years.On Feb 2008 when i got lots of issu from the...

I have been using Cincinnati bell for many years. I have had few problems with their wireless services till now, usually they can take care of them within reason. However this time everyone I have contacted seems dumbfounded. I bought a Sony k550i about a year ago for over $200. Now I wish to give it to my son so he can stay in contact with his new wife who is in he Navy and just deployed to the Middle East. IT IS LOCKED TO CINCINNATI BELL, and they refuse to unlock it. It is MY phone and the kicker is, if I can unlock it I plan to buy the Blackberry Curve FROM THEM and set it up to use wi-fi!!! A $300 phone!!!

Can anyone explain to me why, after you move on to a newer model phone your old one MUST be thrown in the trash? Why can't it be unlocked and given to someone else who can't afford a phone as nice and who desperately needs it? He lives in Virginia Beach and uses Cingular.

They act as though they can't unlock it and I know thats not true, there are plenty of unlocking programs online but no-one wants to try it with a Cincinnati Bell phone.

I am interested in a class action suit against any and all cell phone companies who lock their phones. There is already legislature working its way through the ranks to make it illegal. If I buy a car at a dealership I do not have to fill it up with gas there forever...

Cincinnati Bell
32
%
Not bad, but could've been way better. This company does respond, but not as often as you'd expect them to.