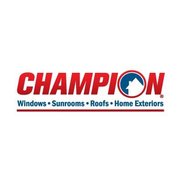 Having problems with Champion Windows?

My husband and I contracted with Champion to install a composit deck and to also finish up some soffett work for us. The deck job was nothing short of a nightmare!! We were told that we were getting "commercial grade" decking...Well the guy that was installing it let it slip and told us that they get all their decking material at MENARDS!! We are NOT happy!!! We could have gone to Menards ourselves and purchased this deck!! We had to babysit the guy the entire way on building our deck, he left a huge chunk that he had taken out of a corner of our decking with his drill and didn't even fix it. We had to call and have them come out to fix it, only to have to call them again for popping screws, which they have not came back out to fix!! Also, they never did show up to do the soffett work!! I called the Cincinnati Corporate office today to let them know of our bad experience!!

DO NOT contract with this company for any kind of decking work!!! We have their windows and love them, but we delt with another portion of the company for this job 3 years ago.

We recently had a Champion all season room built. We were promised the room would be completed in 10-15...

Who builds Champions Siding products?
It's not Champion... The correct answer is Crane Siding...

It may be a shocker that Champion trys to represent themselfs as being a superior manfacturer with there are selling the same products name brand products you can purchase off though distribution. Beaware of doing any business with Champion as they are a ripp off and they are full of these mis-leading sales tactics.

Had an entry door installed about 3 years ago, have had nothing but issues since. The company prides itself...

Just wanted to let you know how disappointed I have become with Champion Windows and your...

We had five windows replaced about eight years ago by Champion. There are warrantied against failure for...

The location in Knoxville has never had any unresolved complaints, and holds a A+ Rating with the BBB. They...

champion window of Cleveland owes us ex employees money from backpay to be paid out by Dec. 31, do you think they will have the decency to pay that out a little before christmas just to say hey guys we messed up were sorry here's a little christmas bonus let's put it this way champion has alot of people talking bad about them already you dont need ex employees that has seen and heard the things that go on inside champion doors to go around and talk about it . I say pay up make everybody happy and lets go our seperate ways you forget about me i forget about you no hard feeling

I ordered windows and a storm door from Champion Windows in May 2008 with a scheduled installation of the...

Used non-paintable caulking around windows. Broke stove top range and took weeks to replace i t. Had to pay a professional paint company to fix the caulking damage $700 after paying Champion for messing it up.

Their response to the negligence: We are done and that's it.
At this point, it would be a civil lawsuit.

I recommend to use a more knowledgable window company and allow a professional painter/co to do the caulking job.

On Champion's flyer ads, they say they build it. install it and stand behind it. They do not stand behind their work at all.

We purchased a house with Champion windows - installed in 06.

I called Champion to have repair on a window and they told me that I needed the receipt and record of the sale. We don't have that as previous owner contracted the installation. Now I wanted to pay for repair and since this is their product expected service for the product that they supposedly stand by.

If you had bought Anderson Windows or any window at Home Depot there is a real warranty. Bottom line don't buy Champion pay a little extra -- or maybe not -- but get a window that is truly under warranty.

Champion makes a sub standard product and don't stand behind their product either!!!

I RECEIVED A QUOTE FROM A SALESMAN OF CHAMPION ON A FRENCH DOOR. TWO DAYS LATER I CALLED HIM TO STOP BY AND...

I had a house full of windows installed in the spring of 2008. The first winter I had to put plastic on the windows, because they leaked so bad. Again this past winter I've had to do the same. I did call the company and they sent someone out to investigate. They said this was a normal occurence. Extremely dissatisfied with the windows and the customer service. That was the worst $7, 500.00 I ever spent.

I had Champion out to our home to provide a free estimate. The sales person was rude and insisted that we place an order that evening or we would not be able to get the Bogus sale price. We placed an order just to get him out of our home and called to cancel the next morning. The Manager rufused to cancel the order and refund our deposit. We then contacted the BBB and finally got the order cancelled and our money returned...4 weeks later. This company is extremely unprofessional and unethical...Stay away at all costs!! The prosuct is average at best and way overpriced.

I just became a first time homebuyer and requested champions to take a look at our upgrades request. My...

Our experience with Champion Windows started out great. The Sales person seemed knowledgable and gave a nice presentation. It went downhill from there we ordered our windows on 9/1. After making several status calls to the salesperson, I got frustrated with his non response and called to speak to his manager. I waited one week for the manager to call back. He never called back. I finally got Nikki who also failed to follow up .The office manager Pat was the next person I spoke with, she did follow up. When the day came for our windows to be installed the crew sent out had never done an arch window. We had to reschedule. This gets better, when our windows were installed the Arch was made with the incorrect grid pattern. The installation manager came out to re measure the window and broke the window while measuring, very strange, they probably wanted to blame the factory and say the glass came in broken to save their margin. The manager also left our customer file at our home where I noticed 11 days passed( (measured 9/3 ordered 9/14) between the day we measured and the windows were ordered. Wow, that would have explained the delay from the original 6 week time quote. Steve the franchise owner was also disappointing. When I asked him why his salesperson and he did not call me back he said it was because he got too many messages and since I had talked to Pat he did not feel the need to call me back. Nick the salesman was told not to communicate with us since his poor service was now being addressed by the office. Pat almost saved this poor experience but I feel that potential customers must know that this Champion branch in my opinion does not care about customer service and follow up. I CANNOT AND WOULD NOT RECOMMEND THIS BRANCH. The windows seem okay and the installers were okay, (by the way don't listen to the line that all of the installers are Champion employees they are contractors and obviously not fully trained, remember the first crew that showed up for my installation had never installed an arch window.) This review is being submitted because Steve(owner) Nick (salesman)and Nikki (scheduler) failed to follow up and communicate when I had questions about my order. Pat and Dave almost recovered this experience but to me this Champion franchise only cares about getting your money.

We purchased five double hung, one garden, one two lite slider 6/23/09 They were installed 8/17/09 On 8/25/09 the garden windwo broke. I called the Avon office to inform them of problem. They told me it was probably a stress fracture. They sent someone out to measure the broken part. They should have already had those measurements in the computer. Anyway, they said it would be another six weeks for the part to come in. At the end of six weeks I called, only to find the order was never submitted. She said it would be another six weeks. I explained to her that we were going away and needed to get that window fixed before we leave. She called the factory, and they said the window would be here by Monday November 2, 2009 and scheduled the instalation for Tuesday November 10. Today, I found out the window is still not here and it won't be fixed before we leave.
Throughout this entire ordeal, the manager of the Avon Store, Mr. Tony Coviello has never called to offer any kind words. Now I am stuck waiting for this window to be fixed. I am also having moisture on the inside of the slider. This is not a good sign.
I would like to speak with anyone that can give me an explanation of why this situation has occured in the first place.

The complaint has been investigated and
resolved to the customer's satisfaction
Resolved Champion Windows — ripp offs, jerks & cons

Are you kidding... I am sick and tried of double standards and the greed these days. I'm very...

Carpet cut while installing sheet rock around front bay window . Used friend to do inside work did not have...

I had most of my windows replaced recently in my home by Champion Windows. Many of the windows were installed...

Champion Windows
39
%
This company is on the right track to keep up with incoming complaints, but there's still plenty of work to do.