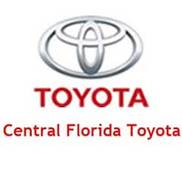 Having problems with Central Florida Toyota?

ComplaintsBoard.com is not affiliated, associated, authorized, endorsed by, or in any way officially connected with Central Florida Toyota.

The complaint has been investigated and
resolved to the customer's satisfaction
Resolved central florida toyota/ tundra — no out.

I leased a 2008 toyota tundra fifteen months ago and i wanted to sell the lease and i found a person that i...

Central Florida Toyota
100
%
This... this rating shouldn't even be possible. Not every mother cares about her own children how this company cares about their customers. Perfect!