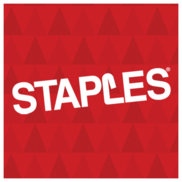 Having problems with Staples?

I purchased a scanner at my local Staples store on 12/13. The store personnel couldn't figure out how to...

At 10:00AM, Wednesday, 10/24/07, I called in reference to my order. I was told that the order was placed on Tuesday afternoon. (That's 24 hours after I placed my original order) Furthermore, I was told that they didn't know when the proof would be complete but it should be available sometime on Wednesday. At 1:50PM, I stopped by the store to get a definite time in hopes that I could have some brochures to give out at my 6:00PM meeting and maybe enough for a weekend convention. I was told that the proofs for the brochure and cards would be ready at 7:30PM. When I asked why are they were so late the clerk told me "because I had to submit 20 designs in two days". At that point, I retained by original scratch designs and called customer service. Customer service called the store and spoke with the General Manager. The G.M. told customer service that I had just placed the order on Wednesday. (Wednesday morning I presume.) What!!! The Customer Service agent then proceeded to tell me that I just placed the order today and that it would be ready at 7:30PM. My response was that the earliest I could review the proof then would be Thursday morning. I then continued to press the agent to file my complaint which they eventually did.

My overall rating of this Staples' print and copy service would be a 2 out of 10. The service was poor and the product was late or not delivered. And lastly, the outright lying by the General Manager of the store was inexcusable.

Staples advertises a 24 hour turnaround after the Graphic Artist receives the job, but they never tell you it could be close to 48 hours before they submit the job to the G.A.

I hope this helps the rest of you. I have to go now and try to keep $2500 from going into the waste basket.

buyer beware - at least at this staples!

Just wanted everyone to know that Staples DOES NOT stand by it's 110% pricing policy. I brought an add from another store within 2 days after I purchased the same item at Staples. They matched the price, however the woman manger stated that Staples discontinued it's 110% price refund a few days earlier. Yet it was clearly displayed on the counter by the customer service register. When I questioned why the sign was still up, she said she was too busy at school to remove it. I than told her I wanted to return the item and not have them match it. I left the store and purchased at Office Depot.

I emailed Staples this past weekend on this matter and I have received no reply either by email or phone. Great communication?

Just wanted you to know - buyer beware - at least at this Staples.

By the way - this 110% price return is still displayed on it's website. I won't know about the store - I will never go back to one.

extended warrantees at staples are worthless

Staples in Canada, Kingston ON to be exact.

The extended warrantees at Staples are worthless. I purchased an Acer laptop there about a year and a half ago (buying an Acer was my first mistake). Within the year, the screen went. It was sent back to the manufacturer and repaired. A month ago, while it was on the extended warrantee, the screen went again. I was told by the Staples Warrantee department that they would need my computer for at least two weeks. I told them that I used my computer in my business and could not do without it for that length of time. They offered no help. They would not provide me with a loaner.

I ordered a Dell laptop. Once it was received and set up, I took my Acer to Staples. After a week, they called to inform me that it would cost more to repair than the current market value of the machine. They offered me $554 in store credits and they will keep the computer. As all I need is a monitor, I have turned them down and they will send it back. Pathetic.

An important note that Staples never mentions is that the warrantee is refundable. If you take it in, they will give you the pro-rated amount. I would suggest that anyone with an extended warrantee do this as soon as possible.

staples rebates is a rip off!

Staples and H.P. ripped me off... on the purchase for a computer bundle in 2004. The offer was for a "rebate" of $ 100 dollars. They couldn't locate anything pertaining to my purchase... but sent me spam about my new computer. I blocked their site from my computer and will never set foot in Staples' store again, as far as H.P... the computer has been very reliable but doubt if I will ever purchase another H.P. product.

I won't buy anything with a rebate.

staples, that was easy?... get a new slogan!

Being a long time customer and a huge fan of Staples, I was greatly disappointed at the service which I received this past weekend. Whatever happened to the courteous customer oriented service of the past? I had a recent death in my family and I was in dire need of printing out 400 copies of funeral programs. I phoned the Staples in New Rochelle and they informed me that they couldn't have it done for another 24 hours (Ok, thats understandable, atleast he was being honest). After calling the Staples on Sanford Boulevard in Mt. Vernon, I discovered that I could have my copies the same day. I rushed over, dropped off my disk, and was informed by the young lady at the copy center that my programs would be ready between 6 and 7 pm. I told her it was important, so she noted that they would give me a call when they were done. At around 8 pm, I assumed they probably forgot to call me. I was wrong. They forgot to make the copies! (They discovered this after walking around in circles for an hour). When I asked why they weren't made, I couldn't even get a straight answer, let alone an apology! Don't employees have to go through training anymore? (and how do you forget to make copies? I mean you work in the copy center, what else would you be doing?) Atleast have the decency to give me a call and let me know there was a problem (if there even was one) so I can make other arrangements. Is there no one there that can take the initiative to do that? I mean I'm planning a funeral here. I'm not saying my work isn't as important as the next guys, but it's a funeral for crying out loud! They couldn't even get the copies done till the next day, after the wake! Thank God Kinkos was able to finish my job in under 2 hours that same night. My confidence in Staples is shot. They obviously have a long way ahead of them in terms of fulfilling customer expectations. Wish I had an easy button.

I am sending a formal complaint to all available avenues that I, a customer, has witnessed regarding false...

staples.com gift cards are not usable

I went to a Staples store to purchase a toner cartridge, they did not stock it in the store. No biggie, they...

Staples
1
%
Doing nothing would be this company's favorite pastime, if they had the energy for it.