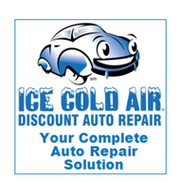 ComplaintsBoard.com is not affiliated, associated, authorized, endorsed by, or in any way officially connected with Ice Cold Air Discount Auto Repair.

A c mana fold was replaced and a c accumulator system was recharged and we were told it was fixed we paid 608.00. Dollars took the car home and found out it was not fixed Eddie told us to bring back the van so I he could check it and this is after he already had told us it was warrantiedfor two years or 24000 miles after we pay he gives us a recipe for 12months 12000 miles. So we wait to see why it's not working so 4 hrs later he tells he needs another part and can fix it the next day so we come back the next day and does not fix it because of a part he needs and that we will have to leave the car overnight to get it repaired so we rented a car at avis for 100.00 a day to get the van fixed he a sure dus it would be done in the morning when we got home he called and told us it would be 250.00 dollars more than the original estimate and that he would need the car for two more days at this point we were fed up we went back the next day and picked up the car still not repaired 725.00 later and nothing is fixed they left parts on the floor in the back and the actual is blowing slightly cool in front and nothing in the back of van before I left he told me ever thing in front is fine and the van was ready to go look am very sur e he did this to get rid of us because he could not fix it right! So let was conned out of 725.00 dollars

Owner, Sharon, of the franchise located at 1180 Court Street Clearwater, Florida, is issuing her employee...

Can't recommend. Scratched console and dash; bent lip on door seal replacing my heater core. I let them talk me into replacing the a/c evaporator while they had dash out as a precautionary measure. They claim my blender box was broken and had to be replaced as well but if it was broken, they did it. It was working when I took it to them. As part of disassembly to remove dash they had to remove the steering column. It was put back incorrectly and now I have play in my steering wheel. I'm not convinced the heater core isn't still leaking because after nearly three weeks the passenger floor is still wet and the coolant reservoir isn't full. For a complex job like dash removal I recommend biting the bullet and going to the dealership. My repair bill was approximately $1, 450 which was more than the dealership's quote for the heater core replacement alone.

My air was looked at and they told me I had no leak. Charged me $125 to recharge it. Worked 4 days. Brought back to a different franchise by me, they told me it was a discharge hose. $300 to fix and recharge. I got them down to $150. Worked for 3 days. Brought back ...now they say it's the compressor. Brought it back to original ice cold air in Crystal River. Yes, it's the compressor. Why do they nickel and dime you to death, and keep charging to recharge, when they know it's something bigger? It's a scam. Don't take your vehicles to ice cold air.
Ice Cold Air in 11930 US-19, Port Richey, FL 34668

I reported that the aircon doors were not being activated properly and the cruise control was not working and...

brought my car to this so-called auto repair shop. After a week of NOT doing anything to repair the car and...

The complaint has been investigated and
resolved to the customer's satisfaction
Resolved Ice Cold Air — A/C not working, repeated repairs.

I've gone to Ice Cold Air over five times to get my A/C repaired, it works properly for the first couple...

I recently got out of wheelchair in Apr.2010
purchased a really nice car and brought it in to Ice Cold Air to have it gone over and inspected (needed the AC recharged. After they looked it over and said it neeeds some work they said need not recomend I reluntantly agreed to let them do it. So they replaced gaskets and plugs and wiring replaced perfectly good oil pan and such like oil sending unit. now I barely drive the car just locally since I am bed ridden most of the time.
on jan 1st went to local store and atm less than a quarter of a mile from my house it started running really rough so I went back home where the radiator let go in my driveway it never got hot and the oil pressure gauge went down to zero. was just about to get first oil change since they worked on it i have not even drove 30000 miles since they did the so-called neeed repairs. they sent a towtruck to pickup the car and look at it at there shop in which the manager called and said I needed a new motor because it had a spun bearing I know i did not do it and they just did neede repairs to it that they said would last 4 years Now this new guy wants 3500 dollars before he even touches it I just want to know who killed my car and I definitely don’t feel as though i am responsible for it when I just put thousands in repairs. Why was the problem not fixed when I first brought it to them if they actually knew what they were doing

my name is kelly scott and im starting this complaint out with thank you on fixing our last problem with the...

THIS GUY WILL SCREW YOU OVER ROYALLY DONT BUT ANY VEHICLE FROM HIM DONT GET YOUR CAR FIXED THERE WE BOUGHT A...

I was charged for a repair that included replacing the evaporator in my 2004 4Runner. 8 months later, the...

Ice Cold Air Discount Auto Repair
36
%
This company is on the right track to keep up with incoming complaints, but there's still plenty of work to do.