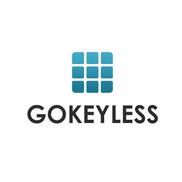 I can't say enough bad things about GoKeyless. They are the WORST company I have dealt with as a buyer. Customer service is nonexistent. IF they do get back to you it's several days after you called or sent the email. I've told them we'd never use them as a vendor again and I got no reply asking if there was anything they could do to keep us as a customer. Very bizarre operation they are running and I am perplexed how they are still in business.

I can't say for sure what is going on with the products Gokeyless has sent me but there is no way a legitimate manufacturing business could stay in business with the 50% failure rate I have experienced with 10 (TEN) Trilogy DL1300 locks. I paid $501.60 for each lock. 50% failure rate!!!
I have had locks that want hold their memory, locks that want lock and locks that want open. The biggest problem is sometimes the key will not override the problem and the lock cannot be locked period.
Now after the fifth lock, Matt in the support department said there is nothing more that Gokeyless can do. That comment came after the following events occurred over the last couple of months….another lock stops working and I call into Matt. He said it was out of warranty but he would put in a replacement request because I had experienced so many failures. After a couple of weeks they OK sending a replacement lock to me. I received the lock, executed the programming and installed it on the door. 2 days later it dropped its memory. Yes, the replacement lock was now not functioning. I took the lock back off and Matt had me do a complete cold start (you have to open up the lock and get to the board so you can connect a jumper while programming). Still would not hold its memory so Matt requests another replacement for the initial replacement. This is where the wheels fall off the wagon….instead of sending me another replacement DL1300 to replace the failed replacement the company sent a completely different product. It wasn't even a lock. Called Matt back again and I sent the incorrect product back. Weeks go by and I still did not receive the replacement for the replacement. After complaining I finally received the replacement replacement. Programmed it and installed it. One day later the replacements replacement dropped its memory. So after having another failure, receiving a bad replacement, then receiving an incorrect product and then getting a second bad replacement…Matt states there is nothing more that Gokeyless can do.
Obviously there is something going on with the products. Refurbished??? I don't know but I will never order from Gokeyless again and I will try to warn others of my experience.
To send me two bad replacements and one incorrect product and then state "there is nothing further we can do" is pitiful. You can't replace a bad product with another bad product twice and then say "sorry, you will have to buy a new one".
Gokeyless defiantly has its problems. As far as the DL1300's, I don't know if I got a bad batch, received a bunch of refurbished products from Gokeyless or what but I hope anyone that reads this will go elsewhere for their purchase.

We would like to have purchased 3 wireless locks from gokeyless but apparently they don't need anymore business or at least not my business. I contacted this company 4 different...

I wish I never used their service and their product. They gave me nothing but problems. To resolve an issue people usually contact customer support that should be always available, on weekends preferably as well. But this company doesn't give a crap about its customers and reaching their CS is pretty tough.
I want them to help me with my problem, but they don't answer and I really don't know what to do and whom to tell about it.

I paid for second day am extra of 176$ its passed 3 days already and nothing.. when i contact custumer service they claim thats nothing by thier fault keep lying about shippment and let me think im stupid dont know how to count to two! I placed the order on sat was supposed to get it max by tue AM! no one took responsibility for thier mistake and keep telling the same lies again and again. All i asked is to get the shippment cost refounded cause why i need to pay 176$ for second day if its coming two days after?? And all i got its an answer that they going to cancel my order.
Don't do business with them if you guys want to stay happy.. NOT RECOMMENDED AT ALL!!

Ordered one of these GoKeyless locks and had a problem with mine. It was probably defective, there was something wrong with it, it just did not work as it should to. So I called GoKeyless customer service, explained my situation and asked them to change it for a proper one. Their customer service rep was the worst ever, he tried to assure me there was nothing wrong with the lock, even thought I was 100% sure there was a problem. He did not let me say a word, was very pushy. He refused to help and I never received a replacement or a refund. Horrible service!

Ordered a lock from www.gokeyless.com and received a defective one. I contacted customer service and they sent me another one which had the same defect. So I decided to ask for a refund but as soon as I asked about the money they become very rude.
I spoke to a person whose name was Mike or something like that, I don't really remember and he was a really nasty and impolite person. GoKeyless has the worst customer service ever, they don't want to help, they are very aggressive and customer unfriendly. I did not received my money back.

www.gokeyless.com — The seller is scammer, and he hasn't sent info about the order

Awful customer services. I ordered new lock from the company www.gokeyless.com. The rep was polite and helpful, but after he received the payment. He suddenly vanished somewhere...

gokeyless.com — I placed wrong order and the company hadn't helped me

I placed the order on the website www.gokeyless.com, but after 3 hours I understood that it was wrong. I returned to this website and sent them emails. I asked to change the order, but they didn’t reply. I contacted their customer services and told the same thing, but they only promised to check order and called me back. I haven’t received anything from them, but they took money from me. Total scam, so don’t buy from them and post comments about your experience with this company.

GoKeyless
25
%
Not bad, but could've been way better. This company does respond, but not as often as you'd expect them to.