Other Cost Plus World Market
File a complaint Contacts Complaints 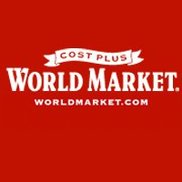 Having problems with Cost Plus World Market?

ComplaintsBoard.com is not affiliated, associated, authorized, endorsed by, or in any way officially connected with Cost Plus World Market.

Shop elsewhere because World Market is untrustworthy. I ordered 4 chairs and two out of them had broken leg...

I bought two pillows from this store Worldmarket and received only one pillow. Second one was missing and the...

We ordered a chair from www.worldmarket.com and when it arrived it was clearly seen that box was opened! Chair was damaged and had many scratches. We contacted Worldmarket support and they asked us to send pictures of the chair. We did as they said and they agreed that chair arrived in a bad condition. They promised to contact us back as soon as they decide what to do, and when they finally contacted us they said that was not their fault and that they were not responsible for these damages. They refused to help and said that there was nothing they could do!!
Extremely poor service! We are very disappointed with Worldmarket and will never buy from them again! What a waste of money.

I went to the website www.worldmarket.com and wanted to buy some stuff for my kitchen, as well as it was mentioned that the delivery was for free. I placed the order and paid for it immediately, but these ### charged me for the delivery as well. WTF? I sent them multiple emails and asked to return money back, but I heard only blah-blah and nothing more. They are liars and scammers, and I want to find other deceived customers, who lost money. Please we need to stop this company and return our money. Post your comments.

Have shopped at World Market for 8 years - enjoy the uniqueness and variety of products and never had any issues. Today, purchased my first piece of furniture and after my experience, will never step foot in the store again, with the exception of having to return the piece purchased today. After opening the box to begin putting the desk together, quickly realized that we were missing a major piece - inside panel that holds both sides together, along with the drawers. I called the store to let them know and to find out what I needed to do to get the missing piece. Although the person on the line was nice, didn't apologize for the inconvenience, but simply told me to come back into the store, bring the schematics and they would see what they could do. I found it hard to believe that the piece couldn't be ordered over the phone, but no one wanted to take the call to get the information. My husband decided to call back awhile later to see if there were other options by speaking with a manager. We were told that management wasn't available and they would call us back. This was about 5:30pm. About an hour later, I called to see if I could speak with someone and was told management was on the other line and that they would call back when they could. Understanding this was a surprise gift that we were putting together for a birthday party tomorrow...At this point, I am willing to drive to another store to pick up the missing part or pay to have it rush delivered, but no call back. So, knowing the store closes at 9pm, called around 8:50pm to see if a manager was available and instead of speaking with a manager, had the pleasure of speaking with a not so pleasant store clerk, who couldn't find enough ways to tell me that no manager was available and that I until the needs of the customers "in the store" were met, I shouldn't expect to hear back. So, when in the store, staff will do everything to help you when you are purchasing items, but want nothing to do with you when you get home and find that you are missing a major piece of the furniture you just bought! Of course, I would expect management to leave after their [censored] and don't expect any retail manager to call me after their [censored]. At this point, the desk is halfway put together and we have no solution as to how we are going to get the missing part. I asked to have the name of a Regional or District Manager and of course, was told they weren't in the store. I didn't expect that, but did expect a name since I was getting help in the store. All I expected was a phone call back, so we could figure out how to get the missing piece as quickly as possible. So now, suppose I'll have to take the half put together desk back to the store and continue the search at other companies. This is unacceptable and short staffed in no excuse. It's the holidays and can't imagine with the economy the way it is, that seasonal help is hard to come by. It's evident based on the short interactions with the staff that customer service is low on the priority list and repeat customers - who cares?

Worldmarket.com — Run around on issuing Credit of returned merchandise

World Market does not allow you to cancel an on-line order, even if it is within minutes of placing the order. They do not disclose this on their website, you must search for their policy. I actually wanted this table that I had ordered, and was told I would receive it within 10 business days, not a problem. I explained that I would be moving and needed to make sure it would be delivered quickly. The customer service rep said it would be no problem. By the 15th of December, my order had not shipped out yet and I told the cust. serv. rep that I was moving and was not going to be at this address to receive the order. She told me to call the shipping company, Waybill and refuse the order over the phone, so I did. I called Waybill and they said they would send the table back to the shipper. I still have not received a credit for the table I never received and it is February 03, 2011. They continually give me the same run around when I call. The treatment that they give customers over a credit is ridiculous and makes me feel as a on-line customer, that my business is not important.

Cost Plus World Market was once an employer that I could talk positively about to anyone, until a year ago...

Cost Plus World Market — Fired while under disabillity

After being in a fatal car accident with my 2 young children I was fired due to not being able to return to...

I purchased the product as an ingredient in my Thanksgiving pie and discovered that the package was broken open and product potentially spoiled when I prepared to make my pie on Thanksgiving day. When I tried to return the item today, they refused to credit my account or even give me a store credit. I'm really disappointed that this business does not stand behind their product and do the right thing for a long term customer.

While shopping during Christmas holidays I was offered a discount for opening a credit card account. I did so...

Cost Plus World Market
20
%
Not bad, but could've been way better. This company does respond, but not as often as you'd expect them to.