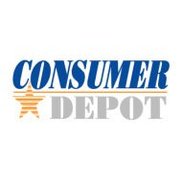 Having problems with Consumer Depot?

I bought a X-Box 360 Pro system from Consumer Depot at the end of november 2008 which I was told was refurbished by Microsoft and had a 1 year warrenty with them(microsoft). In less than 5 months the unit has the "red ring of death" and no longer functions at ALL! I called Microsoft and found out that not only was it not refurbished by them, but that it had been sent to them for repair before and had been tampered with and that they wouldnt even touch it for repair. So now I am 200.00 poorer and have a game console which I cannot get repaired for any amount of money! Consumer Depoy says they won't do anything at all to replace it or get it repaired for me. No customer service at all...

The company sent me an obviously used printer/copier when I ordered and paid for a new printer. It was not in the original packaging, the ink cartridge was already inserted and there was even a document in the copier. I obtained a return authorization and shipped the printer back. They have refused to credit the price of the return shipping $50 because they claim that the printer was not used, I had even sent them pictures of how the printer looked when I received it.

This is NOT a reputable company. There is a class action suit against them for numerous such cases.

Bought an Xbox 360 that is refurbished and 6 months later it fails. Brought in to local electronics repair place and they tell me the unit is one of the oldes they have seen; no firmware updates have ever been done. Tried to email Consumer Depot and they send me an automated response saying that they have a 14 day policy and no exceptions. Tried talking to someone in Sales as there is no phone customer service and they reiterate that there are no exceptions and there is no manager or owner who is willing to take my call. My advice, never use these people. Bad product and worse customer service.

I made an electronic payment on 10-19-2009 on my Home Depot account. My bank gave me a confirmation number...

If politeness was all that mattered I'd give them high marks - but their polite emails and phone reps stand in stark contrast to their actual customer service policies.

I ordered an xbox elite on June 22nd, it arrived on June 25th (as anticipated) but that's where the "fun" began. They shipped the wrong power cord with it so I emailed and called them on the 26th to request that the correct cord be sent. They said it would be shipped, then I emailed again on the 29th and got a response saying that it had already shipped. I called again on July 2nd because the cord still hadn't arrived and came to find that not only had it not yet been shipped, but also that it was being shipped via regular mail (even though we'd paid for an expedited shipping upgrade on the original order).

The cord finally arrived on July 6th but, after appearing to work (booting up, connecting to the internet) we discovered that game discs didn't work on it! So now it has to be shipped back (at my expense). Ironically, when I called them today because they still hadn't responded to the email I'd sent yesterday (or managed to answer the phone either of the three times I tried calling), I was told that I was really lucky because it was the 14th day--their cutoff point for returns (a fair enough policy in normal situations, but I was just able to turn it on for the first time the day before yesterday!!) They don't show any xboxes in stock so I know they can't honor their promise to ship me a new unit once they receive mine so I am canceling my order and hoping that, for the first time in this whole process, they do the right thing and refund the entire amount of my order.

If you're feeling lucky - give them a try...otherwise, this might be a company to pass by. Low prices and nice reps don't count for much if they don't deliver working products in a timely fashion or have any idea what customer service is about.

First and LAST time buyer with these folks

purchased several items from them . One, an Infocus IN1 projector comes with a removable base containing speakers and further connectivity inputs.. Got the upper part and it works fine..lower part not present at all

They want me to RMA the entire order at my cost loose my shipping BOTH ways to correct their error. To even get this sarcastically worded response took 3 attempts at their online contact form..don't bother calling the number in FAQ they will not acknowledge anything.

I spend thousands each year on tech of various forms...but I'll spend it elsewhere after this.

The projector was a present for a 5 year old (fits to a Wii)..try telling him that it has to be returned...

I ordered guitar hero world tour, the picture and description was of the complete set, drums, guitar, microphone, game, and so on.What I got was the game and a guitar which has a different picture on the box.I looked back and they have the exact one for $149 with the same picture and description.There is no telling the difference and nothing that says you get the game and guitar only.They should have the correct picture to what they are selling.I looked them up on the BBB and they have an F rating so they were kicked off of the BBB.Too bad I didn't look first before I bought.I know better now.I have filed several complaints with anyone I can.

SCAM, and no money return

On January 5th 2009, I bought a headset (Creative Fatal1ty), which seemed to be at a very good price.

I received the box open, the item was used and it was not working at all.

I paid for the reshipping and they did not even pay the money back. The headset was 19$, the delivery was 10$. They said they dont give you the delivery back plus they charge a 20% for restocking the product after you return it. More over you pay another 10$ to reship it. And in the end they dont even give you those 15$ that according to them is everything you deserve.

After expending all the money in buying and returning the product, time returning it and waiting, and all because they did not plug the headset to see if it was working. Or maybe they did... I am pretty sure they have already sold the headset I returned to somebody else, until somebody realises that it is cheaper to keep it than to give it back to the store (especially because they wont give you the money back).

CONSUMER DEPOT IS A FRAUD, stay away from it when you are in time

Consumer Depot is a fraud!

In July 2007 I purchased a 1GB Flash Memory Drive from Consumer Depot. When I opened the box it did not work. It was completely dead. In addition, it was obviously not new, there was no original packaging and there was some tape gunk stuck to the side of it.

On their website there was no mention of the fact that what I was ordering was a used unit. This is fraud.

I attempted to contact them to obtain a replacement or refund and they refused to do anything.

Consumer Depot
0
%
Doing nothing would be this company's favorite pastime, if they had the energy for it.