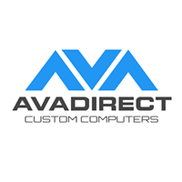 Having problems with AVA Direct?

I have always been using gaming computers/laptops from big companies like HP, DELL etc. This time I decided to try AVA as I saw their advertisements. Trust Me, this was the biggest mistake I have ever done in my life. Within 1 month of purchasing a $2200 gaming laptop it started giving problems; keyboard, display issues, sleep mode problem etc. I went for repair once, they fixed the the issues and gave back the laptop with a bigger issue: Noise. They had made some mistake while repairing. Don`t Ask, it used to make so much noise that it would overcome the full volume of its speaker. Went back and serviced again. Worked fine for a month and then the keyboard problems started again. This time same keyboard keys had the problem. Begged them to find a permanent alternative to the problem. They asked me to go for service again and gave back the laptop claiming the problem is fixed. All this happened within 6 months of the purchase. It worked fine for another month and then the keyboard problem started once again with the exact same keys causing the problem, just like last 2 times. This time I pushed them for an alternative solution, but they insisted on bring the PC for service once again. So I agreed again, but this time they didn't fix the issue. Rather they blamed me saying that there was some kind of fluid spill or something. Seriously! Same problem, same keys and same PC but this time they changed the story with some [censored] photographs. I remembered this was also there when I was returned the PC last time. But guess what they didn't care. So basically;

We had a PC with repeated history of same problem (which at-least has been tried to fix 2-3 times within 6 months of purchase). It had a keyboard problem with at-least 6 keys in particular. This problem has been tried to fix twice or thrice. Then, the people who fixed it, have made one error in the past which led to immense noise in the fan and had to be dealt later again. After at-least 3 repairs in 6 months, the customer faces the exact same problem with the keyboard with the exact same keys and he pushes the customer service to give a permanent solution. And this time customer service replies that the problem is made due to some fluid spill which can be allegedly proven some marks, which the customer is ascertain were there after the last repair and which actually don't even fully prove that it is a fluid spill or something else. The customer service admitted in the past to have problems with thermal paste maybe it was because of that or something else. But no, based on all this, the conclusion is "There was a fluid spill by customer". SO warranty void. LOL!!!

I ordered an AVA Direct destop computer. After placing the order, I called to conform the status of.my shipping date. I was told that my computer was "pending assembly" and that it would ship in 10 to 14 business days. The person I dealt with (Joe, I think) was smug and condescending. I patiently waited the 14 business day, and at the end of the 15th business day, I received a vague email about how busy the company is and that my order would be delayed for an unspecified period of time. I called AVA Direct again to ask for an estimated completion date, and I again got the same smug and condescending person, who told me that my computer was still "pending assembly" and that he couldn't estimate when it would be ready, but maybe in 7 days. This is a terrible way to do business. It's my first encounter with AVA Direct. I was making thus purchase expermentally, as I had heard good things about the priduct, and I am in the market to purchase 19 replacement computers for my business in the third quarter of 2017. I consider customer service to be equally important as the physical product, so on the basis of their very poor customer servoce, I will take my business elsewhere, no matter how good the product may be. My advice: Don't order from AVA Direct; there are plenty of other providers who actually care about your business.

6 Weeks for 2 Sticks of Memory

Motherboard failed in 18 months; not covered by Warranty.
Memory failed in 24 months.
Computer has been at AVADirect for six weeks waiting for memory to be replaced. Despite my many protests, they have not returned by computer to me.

I thought "why spend big bucks for a pre-configured PC? I'll configure a unit that will do what I need it to do. The only problem is ... it "blue screens" continually. I've never had a PC before so I figure this is common...apparently, not so
I cannot contact AVA because their entry codes won't accept their own prompts. I'm looking foreward to using a PC that will run longer than 5 min & it won't have anything to do with AVA DIRECT

I am very sorry I purchased a computer from this company

The experience described by Jack, in his 05-16-2008 post is almost identical to my experience with AVA...

Too good to be true

I specifically picked AVA Direct because of all the steller reviews on ResellerRatings.com, but not only wa...

AVA Direct
0
%
Doing nothing would be this company's favorite pastime, if they had the energy for it.