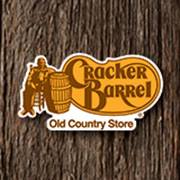 Had a family lunch today with family of 7, placed our order waited waited waited finally our food came but no bread, we waited and waited and waited finally asking wwhere our bread was our waitress said everything in the oven, ok so we wait and wait stll no bread asking again apparently got our wItress yelled at in turn getting a short answer finally I asked for my bread to go and guess what yep no bread I asked why she said everyone is waiting for their bread and I said guess what me too

I recently had an interview with a manager at cracker barrel. I thought he was really rude. Every time he would ask me a question and I would answer him, he would just keep staring and staring at me. It made me feel really uncomfortable and awkward. He then made a comment that hiring me would be a complete waste of time because of my past job history. That made no sense to me seeing as how my last two jobs were temporary jobs. I felt like he was blaming me like ti was my fault my last two jobs didn't lead to full time. Little does he know, the last job I had was a temporary remodel position job where 30 people were hired during the remodel period, but they could only hire 10 people because the was the number of positions they had open. Little does he know, I did my best and was hoping for a full time position, its not my fault I didn't get it. The manager who interviewed me at cracker barrel shouldn't have incenuated that I just quit my last two temporary jobs because he doesn't know me, has never met me, so he really had no right making those kind of judgements about me. I feel like the other half of the interview he was just lecturing me. He then went on to say I've been from your town, I know there are a bunch of restaurants you could apply to. That comment just added insult to injury. Newsflash, I've been applying to restaurants and other places in and around my town like crazy, I just haven't found a job yet. That was just a disrespectful comment. He had no right to make that comment, I got to thinking how does this man know where I've applied and haven't applied. How dare he incenuate that ALL I do is sit on my butt and then go on to tell me how many restaurants I could apply to in my town. Like newsflash ###, I live here. I know there are restaurants here I have been applying. I felt like that interview was a complete waste of time. He also went on to tell me during the interview how many miles it was from my house to athens and how many miles it was from my house to chattanooga after I told him I was looking for a job close to home, and then he just kept staring at me like I was a complete idiot. Seriously this man needs to be fired. The interview took place on Monday june 18, 2012 around 3:30 p.m. Needless to say after the interview, I felt very insulted like I had been talked down to for the past 20 minutes from the way he kept staring at me throughout the interview, from the way he lectured about my own home time like I didn't know that there are restaurants here, from the way he basically incenuated that I could be applying to more jobs when I've applied to half the jobs in my town. After this interview at cracker barrel, I have a whole new outlook on the place and it sure ain't good.