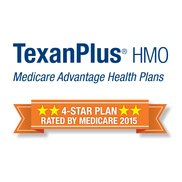 Having problems with TexanPlus Health Care?

In general, I am pleased with the services of TexanPlus. I just received a survey, however, that had a computer-generated voice. It asked me about general health issues and problems. It also said it was a Medicare-required annual survey (which I have never received before and I've been on Medicare for years!).

The problem with the survey is in two specific questions:
1. It asked: "Who is the current president of the United States: Bill Clinton, George W. Bush, or Barack Obama?" What?? It IS 2019 and Donald Trump has been president for over two years now!! After the fifth time it asked this question, I finally said "skip" and it did, thankfully.

2. It asked: "What language did I prefer to speak in? English, Spanish, or something else?" My reply was "English, we DO live in the United States!" It took the answer but I hope that someone heard the response because, honestly, shouldn't any American citizen receiving Medicare speak English? I mean, if they entered the country the LEGAL way, anyway!

Texan Plus — denial of healthcare services

Texan Plus is the worst insurance available. You receive better care with absolutely anyone else.
This is the third time I've attempted my complaint. The Texas Insurance Board is also receiving a complaint about you.
My Mother (Elvia Witt DOB 10/28/31) has requested that I complain about her horrible insurance. As POA and daughter of a completely independent person, I begged her to change back to straight Medicare for future use. Texas Plus is only good when it's not used. In October if this year she had an Ischemic Stroke and was denied Acute Inpatient Rehab which she has clear Medical necessity which was recorded and given to you and Appealed twice. The last appeal didn't even get a response.
Since the stroke she has continued living alone but gave up driving. Last week she fell and has a fractured hip. Surgery was completed last Wednesday and as expected a denial was received yesterday. I started an Apoeal yesterday. She needs this Acute Rehab right now without further delay.
If she had not been denied her right and need for Rehab in October she would not be in this position now. Without Acute Rehab her independence will be tragically limited. This is a real problem with Texan Plus. I've been a nurse for over thirty years and a Case Manager/Denials Manager for over twenty. Do not insult me with Medical Necussity or Medicare Regulations, I've tauhht many classss on them. You have received clear records this time as well as in October.
Here's hoping your mother is not treated in the same agreeous manner that you have treated mine.
At this time you will need to overturn the denial for Inpatient Acute Rehab.
Otherwise I'm delighted to spread the word about Texan Plus to any media willing to print or listen. As the board looks into not only my complaint but others, hopefully they will curb your behavior or better yet close your doors.

I have cancer and tried to get into M. D. Anderson to find out they do not accept TexanPlus! Web site suck...

I just make an application to Texan plus HMO but I find it 's not convenient to me because I cannot keep my doctors, I decided to cancel it immediately because my pharmacy inform me that my medicare plan was changed so I cannot have some necessary medication. The texan plus sales representative paly rick to me, I told him that the plan will be effected on 01/01/2018 but he activate the plan immediately !! Please cancel your plan

My mother's doctor faxed/submitted a prescription to Texanplus for a walker in December 2016. She didn't expect to wait 6 months for the product to arrive. When it did arrive it was Fedexed, no technician was available for proper instruction and it was too tall. She called to request a shorter walker which will probably take another 6 months. I dont understand the Texanplus system. It would be faster and less complicated if customer could personally take the prescription to the medical supply and get evaluated by a technician.

Texan plus sucks!!! If you can at all afford anything else, do so. My mother had surgery on her hand. She wa...

This is my first year and my last. The Doctor that was assigned to me is no longer with Texan plus so...

I have been seeing a cardiologist, who is out of their network; for 5 1/2 years.For the past 4 days i have...

Texan Plus HMO — Annoying phone calls, which I can't stop

I started to get phone calls from Texan Plus HMO. They automated voice informed me to renew my prescription and not forget to take my medicine. I tried to stop these phone calls, but nothing helped. I’m really annoyed with their phone calls. I wonder if there are other people, who had the same experience. Let’s share views about this website and maybe someone will help me to stop these calls.

A relative with a spinal injury is in the process of being kicked into a custodial nursing home by TexanPlus HMO. They are refusing the rehabilitative therapy that I am told by the hospital social worker would be approved without question by traditional Medicare. Without that rehabilitation, he won't be able to live at home and will be committed to a nursing home - WHICH TAKES HIM OFF TEXANPLUS' BOOKS since custodial care is not covered.

Texan Plus HMO — Could not get meds approved by doctor

Dr. Mischke wrote a prescription to change my dosage on my nifedipine which I take every day for blood pressure. Texanplus Insurance company would not authorize approval for pharmacy to fill prescription without approval from Doctor. Three different occasions Texanplus agents faxed approval form Dr. Mischke's office for him to sign and fax back to TexanPlus agents the approval form to fill my medication. I also have problems with staff being rude and being Impolite.

Texan Plus HMO — No satisfactory service

I called the [protected] number and got some young girl or woman that could not speak enlish where I could...

Texan Plus HMO — I am out of medicine because of them

Since April 9th through the 22nd, we have followed every request of the Insurance company, the pharmacist...

TexanPlus Health Care
Doing nothing would be this company's favorite pastime, if they had the energy for it.