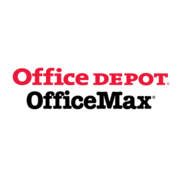 Having problems with Office Depot?

Office Depot — those people are scam

Those people are thefts. They said in the new tech service they offer that they remove unwanted software like...

Salesperson at office depot talks me into a brother laser printer for such and such a price. Go to the...

I did everything I was supposed to do in order to submit the rebate, However I didn't get any response from office depot rebate center after almost 2 months and I submitted the copy again, and called the rebate center, and the agent told me it is ok, then on october this year, I checked the status of my rebate, it indicate my rebate got rejected as I postmarked it late! This is a really a scam, as they can claim you never received customer's rebate submission, and when the customer resubmit it you deny it.I feel so frustrated on this 70.00$ rebate, and I called office rebate center, they told me they can't help me!

I bought two notebooks from Office depot for amount $1450 and at that time they had a promotion with rebate...

i was a employee of office deot store 2191 in tampa fl. they start recently to offer " tech services" to...

I bought a PS/2 to USB Adapter for use with a KVM switch. After opening the package I realized that I did not...

This is crazy and totally uncalled for behavior. I have been a P/T Vendor at O.D for 3 years and have loved this store # 530 have worked there through 2 other managers and helped my B/F get on there. He has worked there a year and been a decent employee as well as I have received many compliments on my work & have exceeded past managers expectations of my work, helping through B2S times and cleaning as a relationship builder in my Tech area. Lester Good started O/D approx 6 months ago and has almost cleaned out any decent employees, not allowing for yearly raises and the clincher, he's now trying to say that my b/f and I are all over each other in public displays, which to me is as bad as slander, I would never cross a boundary as that. let alone give any reason for this sleuth to cause my job harm or my B/f. He has harassed my b/f to the point that when I walked into the store to buy a 700.00 37 in TV, Lester harassed him & wrote him up & I was no where near him. I see a witch hunt going on. I have no had hours there myself for 2 months & have had no reason to be there, but if I shop there Lester harasses my b/f. My B/f & I were recently married & I buy so many things there for our wedding, I know most other employees there as I mentioned I've had 3 years experience with these people. And never ever had an issue as this. It's ridiculous! I've contacted my supervisor and am finding any way possible to help my B/F feel secure, We are not kids we are middle aged w/ grown kids and this is just stupid behavior.

I have been a Office Depot customer for a number of years. Here in McAllen there is a choice of stores such...

On 12-07 we bought 8 (7 same models and 1 different model) Toshiba Laptops ($600 ea) with guaranteed $150 rebate per computer. The sales reps in the Spokane WA. stores (1 on Division Str. and another on 3rd Ave.) where we bought the 8 laptops all promised the rebates were per qualifying purchase and would get them in 90 days max. We mailed the rebates rt. away. By 2-08 we had received only 2 rebates. I went into the store on 3rd. ave. on 2/15/08 and after 1.5 hours! Got the saleslady to speak to the manager at the rebate ctr., Jeff, who stated we would get the 6 remaining ones in 3 wks. Now almost 5 (FIVE) months later, only 1 rebate arrived and I have written many many emails to the rebate ctr. but no intelligent response, just stupid employees who don't know anything or care. The store manager on 3rd. ave. in Spokane also claims to have called them but I have spoken to him several times and been into the store 3 xs, and still nothing, just lies and promises. The rebate ctr. kept denying us the rebates the last 3.5 months saying that the receipts were 1 per qualifying household! Just like that they change the legal description of the document, our receipt, to be whatever they want. This store needs to be to have a CLASS ACTION LAWSUIT against it and be fined $$$$$millions for false advertising, fraud, misleading, corruption, cheating customers, etc... And be dissolved! What a BIG SCAM. DON'T SHOP HERE EVER. WE ALL WON'T BE.

We purchased an office max warranty with our Kodak camera, we were informed we could return it if anything was wrong with it for a new camera. 2 months after using the camera, the features were not working properly. After visiting the store, we were told, sorry! You need to deal with Kodak and here is their address! We were told to send the camera through the mail and Kodak would possibly repair the camera and return it. We purchased the warranty from office max!!! Any parent knows you do not go months without a camera, this is why we purchased the warranty!!! Their replacement warranty is a ripoff!!!

Bought a laptop. Was told their register stopped working and went to another one. Manager (or assistant) assured us first transaction did not go through. Bank statement had 2 charges. Manager made up some story that I had returned it, but when I asked to see the records there was none. Fortunately my bank reviewed the transaction and cleared the charge. Never did hear back from Office Depot.

I purchased a chair from Office Max and only 17 days after the purchase a wheel breaks off. I try to take...

On 12/09/2007 Purchase a large amount of "Home Office" furniture from office depot, which was to be delivered on 12/11/2007. On 12/11/2007, the delivery was shorted by 1 major piece. Customer Service Mgr. told me to wait around until 8:00 P.M. and the piece would be delivered still that day. No delivery. Called back and they informed me that the "Delivery Company" would call me to reschedule. Next day, No Delivery. 5 days later Customer service calls to "Cancel" the order and told me to go back to the store and re-order. Previously paid "Cash". Was told that I would receive a Refund Check and never did. Now am told that I "MUST" wait 6-8 weeks for a refund. Reported to BBB.

I ordered a Tom Tom 910 GPS Navigator from Office Depot's online website solely because of the fact that I am enrolled in the Teacher's Reward program, and I had received a $61 gift card from them.

The order confirmation email I received mentioned 3 day delivery. After a week, I called up and asked and they said the company has not delivered it yet, and it would take another week for it to arrive. Plus they said if you cancel you will not get your "coupon" back.

Honestly, the first thing that came to my mind was to never shop at Office Depot again, and relinquish the Teacher's Reward card.

I ordered it mainly because I had a trip coming up in 3 days, and I trusted that Office Depot would fulfill their next business day delivery promise.

At least they could have sent another email mentioning that it will take two weeks instead of one day for it to arrive. The lady I spoke with mentioned they no longer have that department.

Buyer Beware! Office Depot's Lightscribe DVD external drive sold under the Ativa label has no warranty after 14 days. I didn't notice until mine quit working after 3 months. Ativa manufacturing said they couldn't help call Microsoft (sure). Office Depot said,93that's why we sell an extended warranty. Extended there's NO warranty after 14 days. They essentially said, Tough and offered no help or any suggestion. I wish I'd read the fine print. The item listed for $110! I threw it in the trash.

On July 24, 2006, I purchased a new HP desktop computer and printer from Office Depot, 910 El Monte Ave., Mt. View, California for $1800. Included in that total was $120 for Office Depot's "Performance Protection Plan" that promised "Day One Product Repair Coverage" with "100% Day One Coverage for All Parts and Labor" with "on-site service for your computer system." On May 22, 2007, my computer crashed. When I called the Mt. View store to request "on-site service" on "day one", I was told that I must call Office Depot's Customer Care Center. When I called that number, I was told all they could do was put me through directly to HP. When I said I had the Performance Protection Plan and I wanted on-site service, I was told that the terms and conditions of that plan (not included in the leaflet that is given at the time of purchase) stated that the plan did not go into effect until after the manufacturer's warranty period had expired. I then took my computer into the Mt. View store where I purchased it and asked them to repair it and call me when they were ready to come out and reinstall it. The manager, "Reed" called me the next day and told me to come and pick it up because they had "no one available" to do "on-site service." Obviously, the "Performance Protection Plan" is simply an expensive add-on to computer systems that Office Depot has no intention whatsoever of honoring. I was not given anything that is promised in the explanatory "leaflet" given at the time of purchase and I feel that Office Depot is perpetrating a fraud on unsuspecting consumers by selling a Performance Protection Plan that does not offer anything that it promises. It is precisely this type of fraud that would make an excellent class action. I demanded, and did not receive, my $120 back.

I ordered office supplies in August from Office Max - enough to last me for a while. When I opened an Office Max brand Remanufactured Ink CXartridge in December, I soon found it was defective--no yellow ink. I contacted Office Max, requesting a replacement and was refused since I ordered the supplies more than 30 days ago.

Whether it's 30 days or 300 days, when I open an ink cartridge, I expect it to be of good quality. Office Max says I had thirty days to "inspect it" for defects. By the way, when I placed my original order, it took more than two weeks for the color cartridge to arrive. Office Max had somehow left it out when they packed my order--so it arrived separately toward the end of August.

It would cost Office Max next to nothing to replace their defective product, unfortunately, their shoddy customer relations has cost them a customer.

Office Depot — merchandise was delivered to wrong address, no money back received!

September 14, 2006, we place at Office Depot the merchandise was delivered to wrong address, they pick up the merchandise from the wrong delivery address, and back to Office Depot and since September we been asking for Office Depot to returned what was paid in cash the amount $188.90 and all I get is lies that a check been issue take four weeks but is it has past 3 month and I have made number of call one for week, we dont get our money back.

Office Depot
47
%
This company is on the right track to keep up with incoming complaints, but there's still plenty of work to do.