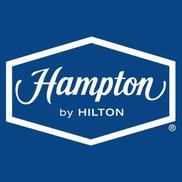 Having problems with Hilton Worldwide?

My original complaint was how my son and I were treated at this hotel. My second complaint is how we have...

If you enjoy the antics of the three stooges, you will appreciate the staff at the Carol Stream Hampton Inn...

I booked a reservation with what I thought was the Hampton Inn in Cambridge, only to be automatically booked in another Hasmpton when all the rooms were full (I must mention that this was done from a sneaky website called "PLACESTOSTAY.COM" - don't EVER go through those guys!!!). Anyway, when we got to the hotel we first noticed this wasn't Cambridge, then we got a room with one bed and smoking, i had requested two beds, non-smoking bec. I am allergic to smoke and traveling with my husband and teen daughter so i needed two beds. There was a huge convention in town so all hotels were totally sold out including this one. When we went to complain to front desk we were told there was nothing they could do since it was sold out. We managed to go back upstairs (mind you it was 4:00 a.m. when we got there due to flight delays) hoping to get a little sleep even with one bed until we could sort this out in the morning. As soon as my daughter hit the bed, she immediately broke out in hives and welts ALL over her body!!! We all freaked and jumped out of bed and went back downstairs to tell them and show the girl we were checking out due to this horror. the girl at the desk apologized and said we should talk to the front office manager and gave us his card. they also had a HUGE display on the counter saying that they have a 100% guarantee and "IF YOU'RE NOT HAPPY, YOU DON'T PAY !!". Well i have tried contacting the front office manager several times and he is ignoring my emails. I will not stop until I get all my money back!!! (This was a pre-paid reservation).

I have been a Diamond member with Hilton Honors for numerous years. I do have one of the few remaining mutual funds accounts that enable myself and my domestic partner to both to be on the same account. During the month of February we checked into the Hampton Inn Convention Center for one night.

The night auditor was very unprofessional. He was constantly talking on his cell phone and our check-in process took almost half an hour. During this time he felt the need to explain to us what a king bed room was and that it would only be one bed and for two gentleman it would not be comfortable. When I assured him that it would be fine, he kind of snickered and had an attitude and assigned us a 2 double bed room anyway. We asked him to fix it and he did. The next morning I called down and asked to speak to the General Manager. Jenny Peak called me back promptly and I explained to her the situation. She apologized and assured me this was not the norm for her hotel. She offered to refund what I paid the night before under the 100% guarantee and then also put as many Hilton Honors points in my account as she could. I thought it was a nice gesture I accepted and checked out later and everything was fine. Realizing that things take time I waited and waited for the points to post. After being a Diamond member for so long, I realize at times Hilton Honors can sometimes make mistakes and I decided to call Jenny again and ask about the status. I called Jenny in the beginning of September and spoke with her. She told me it was a three step process and must have gotten stuck somewhere. This was a Monday and she assured me she would call me back no later than the following Monday. I waited until the second Wednesday and called again and left her a message. I waited until the following Monday for a call back and no response. I left over 10 messages on voicemail since then with not one phone call back. I was told by her staff that she was out sick or she was in her office not taking calls or she was in a lot of meetings off-site. When I called asking for someone above her I was told by the Manager on Duty that they would take a message and Jenny would have to call them with my contact information. Finally on October 10th I called again and spoke to Ney (I think the spelling is correct). I explained to Ney the full situation and told him I need the contact information for someone outside of the hotel.

He apologized and asked me to give him the opportunity to deal with this himself. I told him that I have been waiting over 7 months for the hotel to deal with it and he responded by telling me that he would do it personally. I wanted to give him the opportunity to do so. He called me later in the day and told me that it was taken care of electronically and he depositd 34,000 Hilton Honors points in my account. Yesterday when I noticed the points were still not in my account I called Ney again yesterday and was told "Yeah I got an e-mail about this today and I need AVP approval for this because of the amount of points. I'll discuss it with them today." So tired and frustrated with getting the run around I obtained the number for the Hilton Operations Center in Memphis and was instructed to leave a message for Mr. Mitchell which I did. Another hotel in Germantown gave me your e-mail address and well as Lana Perkins. That is where we are now.

I had a very embarassing check-in process and quite frankly in this day and age in Washington DC I expect more. I gave Hilton Hotels last year over 100 nights personally and over 125 nights between manager's training and meetings. I am also a Platinum Member in Marriott rewards and have dramatically reduced the amount of nights I have stayed in Hilton Hotels due to this level of unprofessionalism. I felt she lied to me just so I would leave happy and that I would just forget about it. In actuality I have not forgotten about the level of service in her hotel, or her antics, which both seem to be on the same level of professional conduct. A team is lead by a leader and I believe she leads her team to same standard she sets for herself. As a regional manager, I realize you have many hotels under you. Some of which in the DC area I believe are the best in the chain.

Hilton Worldwide
3
%
Doing nothing would be this company's favorite pastime, if they had the energy for it.