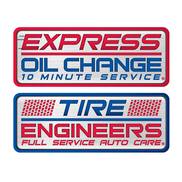 ComplaintsBoard.com is not affiliated, associated, authorized, endorsed by, or in any way officially connected with Express Oil Change & Tire Engineers.

I have a Mercedes Benz E350 and went In for an oil change. I got good personable service-no complaint. When I got the bill they charged me $10 to remove the skid plate and put it back on after the oil drained. Really!? It took maybe 1 minute for that whole process with an air gun(drill). I do not think a $10 charge was warranted. What's next-a charge to open the car hood?

I almost never complain about service. And this might seem kind of trivial, but it is a potentially dangerou...

I recently had a deal with the company Express Oil Change Decatur ALA. I have driven my car and their repair...

Express oil change in Decatur, Alabama is ripping people off right and left. They told me a lie about my tire...

I have a battery that I was manipulated into purchasing 2 1/2 months ago when my car suspiciously would not...

Read this carefully before going to an Express Oil Change. On September 16, 2014, my truck received an oil...

On 09/11/2014 I took my car on my lunch break to have the oil
changed...7 days later the oil light was on in my car. Took it back and
was told we can't see where the leak is coming from so we will just put
more oil in it and spray some stuff on it to see where the oil leak is
coming from. Two days later the oil light is now back on. Took it back
was then told it was leaking from the gasket above the starter. Baloney
these people are rip off artist and I plan on taking them to small
claims court or wherever I need to get my money for taking my car to
another mechanic and the 50.00 I paid for the oil change...

This place sucks i used to work there and they do not care about there employees at all all they care about...

This location changed the oil in the transfer case in my Dura Max Desiel and ruined it, at a cost of 2100.00...

In March 2008, I took my 1997 Chevy truck into Express Oil in Leeds, Al for a simple oil change. Upon completion, the truck would not start. The mechanic without using a diagnostic machine said it was a fuel pump. They tried to charge an outrageous price so I went across the street & purchased the part at Auto Zonefor less than half the price. Express Oil agreed to install the fuel pump. The mechanic on duty improperly installed the fuel pump resulting in a power surge to the truck which caused severe damage to the entire electrical system. In the beginning, the manager, Tony, verbally admitted to the mistake & proceeded to keep our truck for a total of 5 weeks while they repaired all the electrical parts they seemed to believe they damaged. I have copies of the receipts as to what they repaired. Since then, we have continued to have electrical problems & this truck has had to be towed back to them countless times for repair.

They are now tired of dealing with us & the problem they created. They have become very non compliant & have told us to hire a lawyer. Prior to Express Oil working on our vehicle, we had a vehicle we could count on to get our employees from one job to another. Now we have a vehicle we can't count on at all.

We are hiring a lawyer & plan to sue Express Oil for damages & loss of use of a company vehicle. They have been rude to say the least.

My personal recommendation to anyone dealing with this company is to run away as fast as possible. They will ruin your vehicle!!

On August 4th 2008, I went to Express Oil Change and Service Center at 60 willow lane, McDonough, GA for an...

Express Oil Change & Tire Engineers
40
%
This company is on the right track to keep up with incoming complaints, but there's still plenty of work to do.