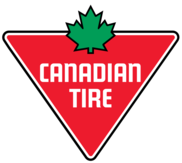 I ordered and paid for 4 Hankook winter tires online order number [protected]. After receiving my confirmation I went to the store to pick them up. I went to the online order pick up desk but was sent to the garage. After waiting 30 minutes to be served the person at the desk had no idea how to use the system and couldn't find the order it was suggested that I come back another time. The person was a mechanic and wasn't sure how to use the system. The second time I came to the store to pick up my order they had difficulty finding the order again and then I was told that the order on the in store system were a completely different make of tire from what the confirmation I received. I wasn't able to prove this because my phone was dead so I returned home to print the confirmation. The third time I came to the tore to pick up my order even though I had confirmation this time that they were Hankook i was told they were Continental tires. They went to get the order which had been picked and they were Hankook. I was told I couldn't have them because they would have to change the order before they could close it. The person then tried finding someone to help him change the order because he had never done it before after about 30 minutes after he examined the tire and helped other clients while he waited for people. It took a couple of phone calls in the I was given a paper and told to go to the service desk so they could close the order. After waiting in line, guess what when they scanned the bar code the order came up with the original order and I was asked to pay 80$ difference because the tire I hadn't ordered cost more. I then had to wait again while the manager came over because the person on the service desk didn't know how to update the order. The manger didn't know how to change the order either. He had to call the director who wasn't answering immediately. I asked that I be allowed to take the tires home as they are paid for as I shouldn't be waiting while they sort out there mistake. The solution I was offered was to pay for the tires a second time and then go home and cancel the original order. I don't think that it's right that I should be asked to resolve this error and at my own expense. I declined. I told them it was the 3rd time iIhad come to pick up the tires. I was informed that it was not their fault it was someone else. I reminded them that I had purchased the tires from Canadian Tire and they were representing the company. At no time was I offered and apology until I suggested they should. I think Robert the manager should have some customer service training as at no time was I reassured that this would be resolved. Someone who knows how to use the online system should also be present at the store at all hours. In the end I spent over 1 hour on that particular occasion just to pick up tires. I had to go to 3 separate places in the store to pick them up. Maybe don't use the phrase pick up it's very inaccurate and misrepresents reality. Anyway I'm exhausted now and completely taken aback by the last couple of days I've spent trying to purchase tires. I have ordered some more for my other car order number [protected] but really cant go through that again. Defiantly will reconsider using Canadian Tire for my personal purchases. I also manage a large account at work which I wont be spending at a Canadian Tire store in the future unless I receive a satisfactory response.