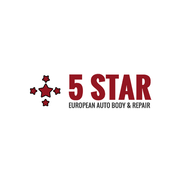 5 Star European Auto is a group of shady car mechanics who not only stole from me but proceeded to make the situation with my vehicle much worse. If a service center takes $100 from you to do your annual inspection, then proceeds to claim that they do not do inspections, and not give you your money back, is that not stealing?? That's exactly what 5 Star European Auto Inc., did to me. To make matters worse, they keep getting my online complaints removed.

I entrusted them with fixing my car and they made it worse. Here's my original review/complaint about Five Star European Auto:

Do not waste your time or your money!! I've summarized this review at the bottom and long-story-short, they completely ripped me off!! The manager tried to get real 'buddy-buddy' with me calling me "bro" a lot, making it seem like we were friends. It worked to an extent. Upon diagnosing why my Mercedes wouldn't start, I entrusted them with fixing the problem for $1, 405. Prior to the payment, the manager wanted to workout at the gym with me and train him, texting me a few times a day. As soon as I made that payment, I stopped hearing back from him. Upon arriving at the shop when he said my vehicle was ready, he said he was sorry as they had been "swamped." Okay, I told him no problem and asked if my car ready to go.

Upon starting my car (it turned over finally) I noticed the steering wheel icon was on and it was bright red. I let my vehicle run for a bit to see if it would turn off. Before leaving the lot I went in and told him about the light, he said they'll take a look at it. It took them about 2.5 hours to say that there's a problem with my taillights that are causing the light to be on. Mind you, my job in the Marines was a diesel mechanic, and I know bulls*** when I hear it. My taillights had been excellent for three consecutive years and would have no reason to interfere with the icon lighting up on my dash. That icon had never come on in the vehicle before. He proceeded to beat around the bush. He estimated at least a few hundred extra dollars to get that taken care of.

Before doing anything else, I needed to think. I asked about inspections (again). The first time he said they don't offer inspections (even though there's a sign outside that says "inspections"). This time he took $100 in cash and said he would take care of the inspection: no invoices or anything.

Oh! And speaking of invoices. The invoice I got for the $1, 405 had part numbers (Mercedes is expensive) that were hundreds of dollars, but when I went to lookup what parts were needed for the job, they were completely phony! He just made up some part numbers and charged me hundreds for them. Back to what I was saying, my $100 in cash disappeared when he did. I haven't received one call or text about the inspection or anything. If I were you, I would STAY FAR AWAY from this place. I was also inquiring about future projects I'd like them to take up on my car, and he was giving me pricing (EXPENSIVE), and as another worker walked by, he asked him as validation, and the estimate the other worker gave was hundreds of dollars lower. The other worker clearly didn't know the scam this guy was pulling on me and looked confused by the look he gave him after he told me a much lower price. I don't want a response saying this was "miscommunication" and they are sorry because there are way too many things that went wrong and way too many ways that I was scammed out of $1, 500. I'm reporting these people to the BBB, Pissed Consumer, scam report, the State Attorney General, Yelp, Bird Eye, Map Quest, Angies List, Yellow Pages, Manta, Facebook, Yahoo, Four Square, and every other place I can leave my complaint. If I could spare the time and thought they had money I'd sue them. If you're looking for highly-unprofessional, one-star services, that are sure to leave your car in worse shape, be sure to contact this shop today! They will be glad to take your money.

1. Fixed one thing to have caused something else to go wrong (classic scam mechanic move).
2. Provided fake part numbers on my invoice
3. Literally stole cash from me to do my annual inspection and disappeared
4. Shady project estimates

5 Star European Auto Body & Repair
Doing nothing would be this company's favorite pastime, if they had the energy for it.