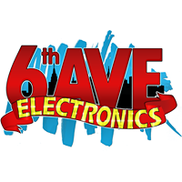 How can you trust a company which is driven by owners who are greedy enough to cheat customers and vendors by...

I purchased a TV from this vendor on 9/4/2010 date, along with the optional extended coverage warranty. After 34 days, the TV failed and would not power on. I called the store for an exchange, but was denied. I was told by 6th Ave that I had to contact the manufacturer because it was within the original manufacturer warranty period. The TV was picked up on Oct 26th. After waiting for 6 weeks, I contacted 6th Ave to get a status. At this time, the TV was in for service longer than I owned it. I was told by 6th ave that there was a mistake on their part, and I should have called their service company instead. The broken TV was returned to my home and I called 6th Ave again to ask for a replacement because of the time I have been without the unit. I was then told I had to create another service call, and it may be several more weeks before I can get my TV back and repaired again. Even though I purchased an additional extended warranty, I have not been able to have my TV fixed for nearly 7 weeks, with no ETA on the repair. This was a brand new unit, with an extended warranty. If 6th Ave had given me correct information from the beginning, there is a chance I would have my TV fixed already. As of now, I have no status, a broken TV, an making payments on a broken TV, and they will not assist me in any way

The complaint has been investigated and
resolved to the customer's satisfaction
Resolved 6th Ave. Electronics — double tax

I went to 6th Ave. Electronics today to return a defective camera. The camera was still under warranty and I...


I purchased 50 inch Panasonic Plasma TV on 1/4/09. It stopped working on 9/1/09. Called the company up 9/6/09. On 9/9/09 two service men arrived and said a part was defective and left the residence. Returned 9/29/09 installed a part called D-PCB and the unit still would not work.They removed the TV from home and have been getting the RUN AROUND and FALSE PROMISES ever since.

About a week later I noticed the credit had still not been refunded. I also discovered that I was billed duplicate for both of selling prices of the receiver. Not only was I billed for the 564.84, but I was also billed for the 513.79. Upon this discovery I went back to the store and was helped by the Store Manager J. Benevitis. Mr. Benevitis informed me that the weekend of the July 25-26 the store encountered issues with their credit card system.

Hundreds of purchases had to be processed manually in the wake of the outage. He mentioned to me that my return issue was not something unusual, there are several individuals with the same issue. Mr. Benevitis printed out my transactions and photocopied my receipts, for his records, and informed me that he would pass the information to Corporate who would take care of the issue. All throughout August I spoke with Mr. Benevitis regarding this issue which he assured me that Corporate was taking care of the case.

On September 4, 2009 I spoke to Mr. Benevitis again over the phone. I told him that the credit has still not been refunded. He suggested that I try contacting the Corporate office. At this point I decided to open a dispute with Mastercard and faxed my information at 9:00 A.M. on September 4, 2009. I then called the Corporate office and spoke to Silvana. Silvana asked me to fax my information over to her and she would take care of the issue. I faxed the information at 11:00 A.M.

On September 15, 2009 at 10:57 A.M. EST I was contacted by A. Garza from the Mastercard Disputes Department. Ms. Garza informed that I needed to supply further documentation for my case. The receipts that I submitted were not sufficient. A proof of return was needed. On September 16, 2009 I contacted Mr. Benevitis again and mentioned that Ms. Garza needs further documentation to help my claim. Mr. Benevitis stated that his Corporate office contacted him and informed him that money was credited back to my Mastercard on August 20, 2009. Mr. Benevitis mentioned that there was nothing else he could do at the store level and my problem needed to be taken up with Corporate and my credit card company. He stated that he would not be able to give me a copy of my transaction due to Corporate policy.

After speaking to Mr. Benevitis I called the Gotomycard.com customer service line at [protected], informed them of my predicament, and was transferred to Ms. Garza. Ms. Garza and I attempted to conference call Mr. Benevitis where he once again informed us that he cannot help us on the store level and that we would need to contact Corporate.

Ms. Garza asked Mr. Benevitis if 6th. Ave contested the repayment, which he answered "No", there is no problem with the refund, and 6th Ave. should have refunded the money by now. Mr. Benevitis was unwilling to cooperate any further and gave Ms. Garza the Corporate phone number. Ms. Garza attempted to contact the 6th Ave. corporate office as Mr. Benevitis advised, but was met to no avail. Ms. Garza left a voicemail.

My name is John, I purchase an LCD 52 inch TV with cables, the cables were 3 times the cost that you would get them from other stores and online. They are misleading when purchasing the TV they do not provide with correct information, Called Headquarter customer service and all they have is a recording for you to leave a message. When you call the store where I purchase the TV from and request to talk to manager Emanuel Alpar, customer service will have an excuse that manager is busy and will call you later, which he never does. (customer service at paramus, store like to put you on hold for 20 minutes). They do not return anything but only give you credit for what you purxhase. I will never purchase anything from 6th ave store, and will never recommend anybody to buy anything from the store especiall the store in Paramus, NJ.

Do not believe these guys. They are frauds. They do not have the items, they say they have. Requires many calls .I reached a rude person Damiano Amato sale #3491, who was not very helpful. I will not shop here any more.

This company sent me a 50" LG Plasma and the screen was cracked. It looked like someone had taken it and...

The complaint has been investigated and
resolved to the customer's satisfaction
Resolved Sixth Avenue Electronics City — stay away from this seller.

I placed an online order for a Blu-ray player on Marc 16, and paid through paypal. On March 20, called them...

Stay away from this company. Customer service is not honest and full of lied.

Here is my buying experiences:
I purchased the lcd tv mount on 3/3/09. I called on 3/06/09 to get the order status, he male rep told me that they are out of stock on the mount and they are in process of fulfilling them. The on next tuesday 3/10/09, they send me an email stating my order is cancelled due to credit card problem. The credit card I used is amex gift card, I call the amex and they told me that the amount of money is preauthorized already by 6ave.. Therefore, I called 6th ave. This time the female rep told me that my shipping address is not matching with my credit card company. I told her this is a gift card from amex. Then she told me that they don't accept gift card as form of payment. I asked her why the last male rep didn't told me this when I called in for order status. She said I don't know. And she lied to me that someone call me to notify me before cancellation. Which is not true. However, I told her that I can used different card now and replace this order. The she transfer me to this male sales rep. He told me that I can't replace this order because they don't have it in stock. So the conclusion is "this company is full of # and will cancel your order without notification"

The complaint has been investigated and
resolved to the customer's satisfaction
Resolved Sixth Avenue Electronics / 6th Ave — bait and switch!

Bait and switch! Was emailed that my order shipped then Scott called and informed me that my tv is damaged...

Sixth Avenue Electronics City
92
%
Fast & efficient, this company is head above their competitors when it comes down to taking care of their customers! Keep up the great work!