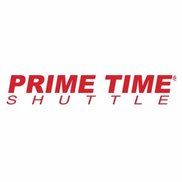 I booked last July 5th for 2 private vans for July 18 pick up. The night before someone called me saying there's no available van to pick us up. This happened last year too. PrimeTime Shuttle should be liable for the stress that you've given us and the amount to get the van.

I don't understand how you can be so irresponsible for not complying with the reservation. Notification is not enough for us to get transportation service to get to the airport.

I am complaining about the condition of the van etc.

We reserved a van on Memorial Day, May 27th. The driver's name was George. George arrived on time but the condition of his van was disgusting to put it bluntly! You could barely see out of the windows they were so dirty. It looked like it hadn't been cleaned...ever! When we got to the airport my husband and son-in-law helped unload all the bags. Then we gave him a tip and apparently it wasn't enough because he commenced to tell us just that! So rude. We paid for the service! Tip is our prerogative not mandatory. We will think twice before using Primetime again!!!

Made on line reservation for my family to travel from Simi Valley to LAX roundtrip for pick up on 12/19/2018 for 6 people and return on 12/26/2018 in a private family van. (reservation attached) The company sent a standard size SUV that could not seat 6 people plus luggage. The assigned driver said he was told only to pick up 5 people. He called his office and was told that there was only 5 people and the office told me that I was incorrect and the reservation was for 5 persons.in order to catch our flight we loaded four people and most of the luggage into the Primetime SUV and loaded the remaining luggage and the remaining 2 people into our car and we both drove to the airport. Due to the delays of trying to get another vehicle and having discussions with the Primetime driver and office we had to park our car in the short term garage to get our flight. I prepaid Primetime per the reservation $106.86 each way for a Private Family Van. They did not provide the service ordered.

The result of their action is that we had to drive to people round trip to the airport and pay for short term parking. Over 100 miles with no milage reimbursement and $240 in short term parking (receipt attached) I phoned Primetime and asked for to repay the charges for the roundtrip services in late December to date no reply.

I would like at a minimum for a credit to my credit card for the round trip fare $106.85 each way or pay for my parking and mileage charges that were incurred due to Primetime not providing the service as ordered.

I booked a round trip pick up and drop off for my parents, through PrimeTime Shuttle, whom were departing on a week long cruise on the Princess Cruise from San Pedro. Upon return from their cruise (2/2/19), not only did PrimeTime fail to advise them in advance that they didn't have a driver to pick them up but they sent another driver that showed up 2 hours late in a vehicle that did not display any signage to make it easy for the public, in this case my parents, to identify their ride. At that moment in time it was raining cats and dogs and the driver had the nerve to cough an attitude about waiting for 10 minutes when in reality it was a few minutes. Once in the vehicle, my father was trying to confirm that he had the right vehicle and drivers name that he was provided with at the last minute. The driver refused to cooperate in confirming any of the information and instead began to belligerent, using profanity, and verbally abusing my parents and told them to get out of the vehicle shy of physically shoving them out of the vehicle and into the pouring rain after having driven about 150 ft. The driver, a Juan Soria, who drove a Nissan Rogue (CA 8DYC173) attempted to hastily throw their luggage out of the vehicle while trying to extort money from them by demanding $40 dollars to clean the interior of the car due to the rain. Not only was he unprofessional, he was unethical in his practices which apparently PrimeTime Shuttle condones. This has clearly opened my eyes to see that this company is more concerned about turning a profit rather then providing a customer orientated service.

Rest assured I have escalated this incident to the local office and will escalate it to corporate. Not only that but I will post this on my social media and will relay this to all my colleagues in Law Enforcement to not use PrimeTime and use other competitors primarily Super Shuttle.

I booked trip to and from LAX through Go Airport. Reservation ID: 2AV5XP.GO to LAX. The driver appeared at 4:05 am instead of 4:25 am and refused to take us because he stated instead of 3 passengers he had info he should take only one, with no suitcase. We had to pay extra $30. He charged my credit card and gave me a receipt. Reservation ID: 2AV5XQ. GO. The second driver demanded extra $15 because he had info there would be two passengers, with no suitcases, and there were 3 of us, as I mentioned. He took cash and said he did not have a receipt. It was a prepaid trip and in my reservation I put 3 passengers. Nothing was mentioned about suitcases.

Prime time shuttle services LAX Airport services were DRASTIC. We had done a prebooking more than a month earlier from the UK (done online by our travel agent). The guy at the...

Left me stranded at LAX

I had made an online reservation a day ahead of time to be picked up at LAX and taken home to Sherman Oaks. The reservation was confirmed with an email. At 10:15 p.m. when I...

I and three other members flew into LAX on 6/8/11 for an academic event in Pasadena. I had made online reservations with Prime Time for a trip from LAX to Pasadena. In a 36 hour period, I was billed six times for this trip (which included the fare for 4 people plus a tip for the driver). I got a notice from my bank of this odd billing behavior and contacted Prime Time's customer service first thing on 6/9/11. I left several messages on voice mail and talked to three different representatives during the course of the day. I was told by the last representative that I would be contacted by the end of the business day with an update on how the problem was being dealt with. I never received the call...and the three different people I talked to said there was only one person who could take care of the problem...and evidently, she was not available or too busy to talk with me. At this point, nothing has been done to return the unauthorized funds taken out of my account.

Threw out of Moving shuttle

I called to cancel my reservation 5 1/2 hours before my scheduled pick up time because my flight had been changed by the airline. I was told by the representative that I talked...

Prime Time Shuttle made a reservation for myself and my wife to be picked up at the Burbank CA Airport. Upon our arrival, no shuttle was to be found. When we called Prime Time...

Prime Time Shuttle
0
%
Doing nothing would be this company's favorite pastime, if they had the energy for it.