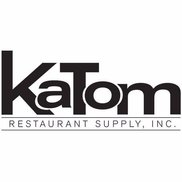 Having problems with KaTom Restaurant Supply?

trying to get the correct lid for the trash can that I ordered has been a nightmare! I am told several times that someone will contact me, well that hasn't happened. I want a full refund and a pId shipping label to send the insert back along with the trash can. [protected] Sharon Curry
My email is: [protected]@aol.com

I purchased 4 Epicurean chopping boards from them and was notified that my order would be received by May 8th. A package arrived on May 7th but with only 1 chopping board. When I inquired about the rest of the order I was told that those boards were on back order and they estimated that they would take another month for me to receive them!! Put me in a bad situation as the boards were purchased as a birthday present for someone on May 10th and I will not have enough time to order them from another supplier at this point. Online sales companies always inform you of a backorder situation at the time of placing the order or shortly thereafter when they prepare your order for shipment. It should not be a surprise when you receive a partial shipment of your order!!
Will never do business with these clowns again.

I ordered new glasses for Thanksgiving this year. Before ordering, I spoke at length with a sales associate and specifically asked how they package glasses, since shipping companies are notoriously harsh on handling shipments. He assured me that not only are they packaged really well, but if anything goes wrong they will make it right.

Well, exactly what I feared would happen, happened. The glasses weren't packaged well, and they arrived broken into a million pieces, and upon opening the box, glass started spilling all over my floor (not too good with kids and dogs around). We immediately took photos, called the company, and that's where all the problems with this company began.

I spoke with Destanie, the supervisor of the entire "customer service" department and beyond being incredibly rude to us, told us that we would have to wait for UPS to come and inspect the packages before they would ship replacements. I explained that there was no way I was keeping a box full of broken glass in my home with kids and dogs around and she finally told me to take extensive photos (which I already had) and e-mail them to her. At that point, she instructed us to to dispose of the glasses. She still refused to ship any replacements, stating that she had to "abide by company policy", but would get on filing a claim with the shipper first thing in the morning and once that had been filed, she would issue our refund so we could go elsewhere.

I tried following up with Destanie via phone but she would never answer, and no one at the company could ever find her. I did send her a few e-mails and she finally responded when I threatened to file a chargeback with my credit card company. Unfortunately, her response was a warning to me about how my credit card would be closed if I filed a chargeback (completely untrue). After reading that, I called my card company, filed a dispute, and of course I am still waiting for that to be resolved.

It is now Dec 4th, and I just received an e-mail from someone named Amanda, who told us that UPS had tried "multiple times" to schedule an inspection with us but we did not respond. Let's be very clear. At no time did UPS ever try to schedule an inspection with us, and anytime there was any communication, we responded immediately. UPS did show up out of the blue one day with a call tag to pickup the shipment, but we explained that we were instructed to dispose of the broken glass and had submitted photos to the seller. They said no problem and left. That was our only communication with UPS.

To date, no refund, and only an e-mail stating that "our claim had been closed" due to our lack of response. I am out $172 and have nothing but wasted time and a bunch of broken glass I had to clean up to show for it.

On another note, we just looked up reviews on this company and it turns out we're not the only ones this has happened to. I can't understand how this company is still in business, or who is purchasing from them. RUN FAR AWAY FROM THESE PEOPLE. THEY ARE CROOKS AND LIARS.

I would strongly advise any serious consumer to stay away from this place, even if their prices might look good. Honestly I am a regular at Webstrauntstore.com and I was always skeptical of this place, but I figured I'd give them a try this time because they were substantially cheaper than Webstraunt. Boy did I make a BIG mistake! I wished I looked at these reviews earlier. I placed my order in early May for an oven which had a MINOR configuration to it, so it was classified under "special order" (which I am fine with). Basically, they claimed that I can place the order with them and they send the order in to the manufacturer. Okay, so when I placed my order the sales rep asked me if I was OK with a 17 day lead time. At the time, in May, I was completely fine with that. What can be so bad with a three week lead time? Or at least so I thought. It's been over a month now and I have not received any information regarding my order. So I called Katom last week inquiring about my order, and they informed me how my order is on it's way... "it should be there by the end of the week", he said. Well, guess what - I still have not received my order! Here we go again. I called Katom again and asked about my order they said it's in their warehouse and it's due to ship within a day or two, but, she added "I will get you the tracking info by the end of the day". The end of the day came. And went. NO tracking info. So I called again, now they say that my order has not even been placed!!! How crazy/insane can you be, Katom??? It's over a month since I placed my order - what's going on here??? Why can't you get your act together? Why is heaven's name does it take over a month to submit the order to a manufacturer? Not to mention all of the lies I was told over the phone that my order is in the warehouse... arriving soon... (forgot to mention- They did offer to "compensate" me to waive the $45 lift-gate fee... What a joke!!!) Only thing I can say is that I will NEVER EVER BE GOING BACK HERE!!!

Dealing with them didn't work out for me.
I ordered an item, but when I received it, it was damaged. Don't know whose fault it was, but I paid for an intact item, not for a broken o and don't want to be responsible for someone else's mistake. I think everyone would do the same. Why would someone keep a broken item to themselves?
Unfortunately, it cost me a lot, because these guys have a lot of hidden fees they don't warn you about. So I had to pay all of those ridiculous fees and that made my purchase absolutely disadvantageous...

I've ordered bar drinkware from www.katom.com, mostly beer and wine glasses. It took a long time to get my order and customer service was absolutely unhelpful and was not able to tell the exact delivery date.
One of my employees contacted me and said they received the package and asked me to come as soon as possible. When I arrived at the bar they said that several glasses arrived broken and few arrived with cracks. I immediately took a picture and sent it to www.katom.com. They did not reply. Then I called them and demanded a full refund and they said they needed pictures. I told that I have already sent one and they said that they did not receive any pictures. They refused to refund me and said that it was not their fault. Avoid doing business with KaTom, they are highly unprofessional and unreliable.

I have ordered some products from Katom Restaurant Supply. It was in the beginning of October. Money was taken straight away and I got only one email that they received my order. After that I heard completely nothing. No news, no orders and when I tried to reach the seller, all my emails were returned back, because the email turned to be fake. Stay as far as possible from this deceiving company.

I received my product on the 4th of March and the same day requested a Return Authorization Number so I could send it back. Who buys just one section of a steamer, without a base for it? The photo shows a complete steamer and they put a note in, saying, "Image may not depict product color, inclusions or accessories." I never considered the bottom of a steamer to be an accessory. So today is the 21st of March and still no RA number so they can take my $26.90 deduct about $10 for shipping and deduct 30% for restocking. I will never do business with this place again and recommend everyone to do the same.

KaTom Restaurant Supply
0
%
Doing nothing would be this company's favorite pastime, if they had the energy for it.