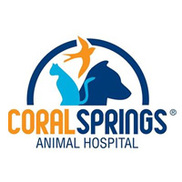 Since month one of our beloved Dogs suffers from chronic kidney failure. Our Vet takes exceptional care of...

Coral Springs Animal Hospital — The cost of xrays. And my dog couldnt breathe and they clearly knew it was an pneumonia but insisted on me payimg for xrays.

I took my 8 year old dachsund to coral springs animal hospital.
My dog could barely breathe and I thought that they wud see her first since she was so weak and unable to breathe correctly. They said tht she was fine and it was no rush. And tht they would be with her In a"few minutes"...
Well.. 1 hour later my Doxie was struggling to breathe worse by the minute. I asked them how much longer because it sounded like an pneumonia. They said tht I needed to bare with them Bcuz they were very busy. So finally another 30 minutes they took her inside. They came back out and said it could be somethingstuck in her lungs and tht they HAD TO TAKE XRAYS which was another 300 bucks. So I said I know it's an pneumonia. You can clearly hear it in her berthing and in her lungs. So they said we wud do xrays. They took another 30 mind to tell me tht she did in fact have a pneumonia.
And so I wasted another 300 on xrays to tell me tht it was what I said it was.
And they said they cud keep her in an oxygen box for like 500 a night. Which did nothing for her. She couldn't even breathe I'm it. So I said we must put her down. She told me the total cost was 800 bucks.

Well, we pit her to sleep and AFTER I PAID THEM WITH MY CREDIT CARD they tell me tht the 800 was ADDED ONTO THE 400 bucks I just spent for sitting in an oxygen box for 45 mind. This place is a rip off. They made my dog wait 2 hours to get any attention. Meanwhile she was declining by the minute.

This place said tht no vets have oxygen boxes so only they did. So I couldn't afford to even try to keep her alive abother day Bcuz that extra day would have been close to $2000 bucks.

They lead you on and they dnt care if your dog can't breathe. So I'm informing you to NEVER EVER GO TO THIS ANIMAL CLINIC.
CORAL SPRINGS ANIMAL HOSPITAL IS A TOTAL FAKE AND THEY JUST WANT UR MONEY.

I took my dog in for a stomach problem, I was told by the nurse that she is taking him to the back so the doctor can listen to my dog's lungs, it was 6:00 p.m.: 20 min later Ryan Hugh comes in without my dog. (My dog is in a cage) the entire time I was in the hospital: why was my dog in the back? Why did Hugh come out without my dog? Just to ask the same questions as the nurse, I had to go over everything again. Hugh recommendation that my dog stays over night, I said no way, for what I asked? To be on the schedule for tomorrow was his answer. I explained that it happened before and the x-ray came back with no answer, just me paying for something with no answers to the problem! I had to recommend the ultrasound to him, because last time I spend good money on x-ray and nothing was found. He agreed and told me that the ultrasound may not define the problem as well. I agreed to the ultrasound, again he recommended the dog stayed overnight to have the ultrasound for tomorrow, or if I want it today it would be an extra $500 for the specialist to come back to the hospital ( I asked for the price difference). I had to ask if he can schedule it for tomorrow, why would I want my dog in a cage overnight? That will not make him feel any better, he can stay at home, in his bed and in his house. Especially when I could have come back tomorrow as planned. I asked if he could give him a sedation for the dog, to sleep and be calm for the night, Ryan Hugh recommended painkillers. I said ok. Ryan Hugh explained that he was going to the back to write the Physical exam report, and make an appointment for tomorrow, I previously asked the difference in price for having the procedure done today compared to tomorrow, I was well aware of the ultrasound cost of $470 + the exam of $130, I was well aware of the cost and I agreed for tomorrow. 20 minutes later I am still in the room with no dog, I never agreed for my dog to be put in a cage, and I wanted my dog back so I knocked on the door and when Ryan Hugh came to the door, I asked Ryan Hugh to bring my dog back! 20 min later still no dog. 20 min later I knocked on the door again, and asked Ryan Hugh to cancel the appointment for tomorrow and bring me my dog and the bill. Instead of my dog in the room with me, I get a knock form the other door I entered from, the receptionist came with the bill, so I gave her my credit card and walked out of the room and demanded my dog back. It felt like they were keeping my dog in ransom for a $52 dollar bill, when I just previously agreed to schedule an appointment for tomorrow for a $600 dollar bill. This place is a joke. He didn't even give me the painkillers, didn't care for my pet at all just the money for my dog to stay overnight or have it done today for an extra $500. I am home with no painkillers and up from 3:30 am taking my pet back to VCA WHERE THEY CARE FOR MY PET NOT JUST THE MONEY! THIS PLACE NEEDS TO BE CLOSED DOWN. YOUR A ANIMAL HOSIPTAL THAT DON'T CARE ABOUT THE PETS JUST THE MONEY

Coral Springs Animal Hospital/Animal Services — $10,251.00 to mis-diagnose my cat & he died at that clinic

brought my cat to CSAH for 2nd opinion - he was experience gas in his intestines. Brought all previous test results w/ me that were less than 24 hours old. They insisted on performing their own. They disappeared for almost 45 minutes with an estimate-they brought me to front desk to process my credit card. Called me back to clinic 1 hr later to inform me my cat had an obstruction in his intestines- it sounded scripted: "rock-bone-tumor or cancer of the lining of the intestines". They make him lay there for over 5 hrs. before surgery. Found out they reserve $10, 000 on my credit card while he laid there waiting for them to do a surgery he did not need. Reported back to me my cat DID NOT HAVE ANY OBSTRUCTION after they cut his intestines open. They with held the heart meds he needed to stay alive - he died 3 days after surgery. Test results returned from lab in CO that he had IBS/pancreatitis; clearly does not require surgery. CSAH would not release his body to me until bill was paid in full. Charged me $10, 251.00 for the privilege of misdiagnosing & killing my cat.
This is by far the most dishonest-unethical-PREDATORS I have ever met. They are all about your money. Treating & caring for animals was not on their agenda that day they me me & my cat. FIRST DO NO HARM is something they know nothing about!

Coral Springs Animal Hospital — $10,251.00 to mis-diagnose my cat that died in CSAH care

went to CSAH for 2nd opinion - cat had gas in his intestines-was told after their tests that he had an obstruction in his intestines: sounded scripted = "a rock-bone-tumor or cancer of the lining of intestines" they were 100% sure!!! They cut my cats intestines open and found NO OBSTRUCTION - report returns from lab in CO that he had IBS/pancreatitis. CSAH cut his intestines open for IBS - which does not require surgery. They let his lay there for hrs prior to surgery to BLOCK $10, 000 on credit card
The experience there was the most HORRIFIC I have ever experienced. CSAH are true PREDATORS. CSAH actions/inactions cause my cat to die. they withheld all of his heart pills he needed to stay alive. He died in the care of these PREDATORS. Be careful. Bill was $10, 251.00 for the priveledge of killing my cat. There is no compassion at this clinic -they are all about the money!

We went to Coral Springs Animal Hospital to have our dog checked out after he was very lethargic and weak...

Coral Springs Animal Hospital
17
%
Not bad, but could've been way better. This company does respond, but not as often as you'd expect them to.