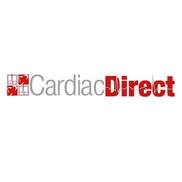 Having problems with Cardiac Direct?

ComplaintsBoard.com is not affiliated, associated, authorized, endorsed by, or in any way officially connected with Cardiac Direct.

I bought an ultrasound machine (sonoscape A6) after was given wrong information by the sellers that thi...

A very rude man named Tom Cassidy with Cardiac Direct called my office, a medical practice, and told my...

Cardiac Direct
50
%
This company is on the right track to keep up with incoming complaints, but there's still plenty of work to do.