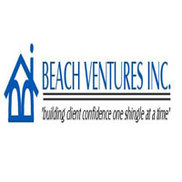 Having problems with Beach Ventures, Inc.?

I hired Zane Beach, owner of Beach Ventures, Inc, also known at Beach Enterprises, to replace a flat roof in the Phoenix, AZ area. He was the low bid, and recommended a torch down roof as opposed to foam, hot tar, etc. He seemed friendly, responsive, knowledgeable, and articulate. On top of that he was low bid and estimated 2-3 days to complete the job, so I hired him.

The roof had one large leak in a bedroom and a couple of smaller ones before he began, and had been foam. The process took roughly 2 months until we thought it was finally completed, not 2-3 days as estimated, during which a number of new leaks were created causing the ceilings and insulation to flood and have to be removed several times. Zane Beach rarely was at the house, and had a crew of workers who did the work. He installed a lot of plywood, and definitely had his workers do quite a bit of work, but could not seem to get it right. Each time Beach Ventures said it was complete, a rainstorm would hit, and new leaks would flood the house, often in new areas, causing large portions of the ceilings to have to be removed, dried out, replaced, and re-painted. Each time they said they were done, they had not water-tested the roof, and just before I would pay, a rainstorm would hit, and the place would flood. It has been a disaster.

Zane Beach's workers were very rough on the roof. In this house, the electrical, plumbing, and other utilities run through the roof. Long nails were used that caused damage beneath, and very likely popped two holes in a water pipe on the roof that needed to be repaired. They cut the electrical off and had to do repairs to get it back on. Zane tried to blame the house for the water pipe bursting in two places just below the roof, and APS for the electrical, but it seems likely the roofers caused these problems, as well as all the drywall and paint repairs required inside. The last time it leaked after the 2 month period, he threw a band-aid on it, using elastomeric coating to try to seal the leaking areas.

When I thought it was all done, after roughly 2 months, I paid nearly 50% above the original bid. He wanted even more, and was upset I only paid almost 50% over bid. In hindsight, I should not have paid him a dime. I was unable to do anything with the house for months, spent much more than expected, and, I found out several weeks ago, several months after paying, after a monsoonal summer storm, it still leaks, badly, worse than before he was hired. Also, his workers got paint all over the beams and floors, cracked floor tiles, had over-paint that did not match on the walls, and generally did sloppy work. I let those go. At this point, I just wanted a roof that did not leak.

I called him on the latest leak, and he went out, knowing he is required to warranty his work. He tried to blame leaves on the roof for the leaks, which is a joke. He slapped down some more elastomeric coating in another area, and left, He did not repair the ceilings, replace the insulation, etc from them latest flood inside. The dining area, 3 bedrooms, and living area, and had major leaks.

Finally, I gave up on Zane and hired another contractor. The contractor water tested, and found several areas that were retaining 3 inches of water on the roof. They believed that Beach Ventures had done 90% of the work, and that the final fixes were fairly simple, yet Zane Beach either could not or would not finish the job right. The new contractor, added some plywood to control the flow of water to the scuppers, sealed and leveled the scuppers, and raised the skylights. The place has now been water-tested, and seems to be repaired.

I also had to get another contractor to replace the ceilings and insulation in several rooms, dry it down, do mold remediation, and paint. The place now seems to be leak-free, has a nice paint job, and is dry inside, 5 months later, and at great expense, lost house use, and hassle.

I strongly recommend you do not use Zane Beach or Beach Ventures for roofing, particularly for flat roofs.

Beach Ventures, Inc.
0
%
Doing nothing would be this company's favorite pastime, if they had the energy for it.