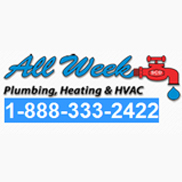 Having problems with All Week Plumbing?

Do not use this business. They promised to show up early even mentioning 7am as a normal start for them. They showed up 2 and a half hours late. They are unprofessional and rude. When I tried to discuss the previous agreement they started shouting and approaching me as if they are going to start a fight. It was impossible to have a civil conversation with them.
They walked all over house for no reason. I hired them for the AC work. They left muddy and rusty boot prints throughout the whole house using any chairs in the area as step stools, leaving them dirty as well. There were areas where they should have never entered that had nothing to do with the AC replacement only to leave more of a mess to clean up.
They left their trash outside, coffee cups, cigarette buds, the plastic that was wrapped around the equipment, cardboard, the wooden pallets, and small pieces of sheet metal they were cutting up.
They did not complete the work in a day as promised and realized they couldn't complete it due to electrical issues. I promptly turned down the Electrician they offered after dealing with them for 1 day and the amount they quoted me for the Electrician. I told them I would get my own and call them when it's ready.
I asked one of the Techs to send me the specs of the AC unit so I could provide it to the Electrician so he ended up texting me a picture he took of the info on the side of the unit.
The Company called me the next day to inform me that they will have to make 2 trips. One to complete their installation and the 2nd one to check the freon and the functionality of the unit once it was connected.
I called back the Tech with the number he texted me the picture with and told them to wait until the Electrical portion has been completed and they could just finish everything with 1 trip.
While I was working later that day someone named Alex called me claiming to own the company and asked if the Electrician completed his work. I told him no and that I would call them to complete their installation once the Electrician completed his work. Then he aggressively asks me how I got their worker's number and why I was contacting him. I didn't see a point to that question nor did I feel obligated to answer. After he started shouting on the phone I hung up on him. He calls me back and starts yelling at me for hanging up on him and that he will not send out the guys to complete the job. I honestly do not know how they exist or function as a business.

Plumber James Murray accepted $400 dollars on 3/2 to apply for pemit for 3 seperate oil to gas boiler...

does not cover warranty issues

Do not use this business. I was overcharge for a new air conditioner unit and they did faulty installation...

All Week Plumbing
0
%
Doing nothing would be this company's favorite pastime, if they had the energy for it.