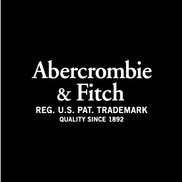 Having problems with Abercrombie & Fitch Stores?

Okay, so like any other teenager, I like clothes. I LOVE fashion. But something is keeping me from stepping it up. And that persons name is ABERCROMBIE AND FITCH. I love the clothes, they all look so pretty. But there is one problem. Not a lot of people can wear them. Why? I will explain.

Because everything is just too small! No one is that skinny! It's like you walk in, find a cute tee, and look at the sizes; Small, X Small, Anorexic, Bulemic, and Malnourished. Then a little part of yourself DIES inside of you because oh, you CAN'T WEAR IT.

My opinion is that they should either enlarge the sizes by a little, or make a XL in girls.
I'm not saying they should change it because I'm "fat" and it just "isn't fair", but because the sizes are just ridiculous!
And not to mention by making an XL in girls sizes, that they would attract more customers.

I am a manager at Abercrombie and Fitch at Twelve Oaks Mall. I assure you most complaints made are those that...

The complaint has been investigated and
resolved to the customer's satisfaction
Resolved www. Abercrombieeurope.com — Scam

I have ordered myself 1 pair of sweatpants, they have never arrived to my address in Spain!!! I emailed them a couple of times about it but they have never replied to my complaint and a phonenumber is not available on the website!! I have contacted the official abercrombie.com website for advice and they told me the following:

We cannot confirm the authenticity of any products purchased through www.abercrombieeurope.com. This web site is not an authentic A&F site. If you have received merchandise through this site, you will need to contact your credit card company to resolve the charge.

Well I called my bank and they said I need to report it at the police station first, send them the report and then they will contact abercrombieeurope.com to try to get the money back. TRY!!!
I can't believe they have just stolen my money like that and that its quite difficult to get my money back. I am new to this kind of crime and don't know the paths to follow. Please if anyone has experience with these kind of scams, please please help me and advice me on what to do next!!! I am very determined and won't stop fighting till I have my money back and they will stop doing what they are doing!!!
Thanks

I made the payment online directly on their website www.abercrombie.com, but on my bank status it says:
COOLNETSTORE.COM
+441617680048RU

Abercrombie & Fitch hired by 19 year old son in Erie, PA at the Millcreek Mall. He clearly told the manager...

In September (2017) my boyfriend and I took a special trip to London to buy my birthday present, seems we...

The sad truth about anf, from the inside: I have been reading many of the complaints on this and many other...

Local Abercrombie & Fitch from Rio Grande Valley refused to refund or exchange pair of shorts. Receipt was available to them and tags were taken off but in the bag. Garment was not tried on because of their long lines during holiday. The manager claimed they have store policy that if tags are taken off then the garment was used. This was not the case and still she refused. I emailed headquarters and they did respond. They stuck to the same policy rules. No customer satisfaction given, so in return I refuse to purchase their clothing line for ever. No longer a faithful customer.

Do not buy from abercrombie and fitch online, i attempted to buy a shirt twice online but both times it came...

The complaint has been investigated and
resolved to the customer's satisfaction
Resolved Abercrombie.com — allow fraudulent use of credit cards

This company allowed multiple charges to be falsely made to my credit card. They mailed items to an address other than on my account and refused to give any information about the order. Other vendors (i.e. Target, LL Bean, etc) caught the fraudulent charges, refused to send the items and contacted me. I feel Abercrombie is negligent in allowing this activity to occur. Their utter disregard to prevent fraud and poor screening system allows this type of activity. Their irresponsible attention to fraudulent activity is part and parcel of the fraudulent charges. Criminals can only committ these types of crimes if the vendor allows them to. Obviously, Abercrombie is more interested in making a sale and could care less if it is done fraudulently. Other company's, like those I listed above, caught the discrepancies with the orders and prevented the transaction.

My bag which had my laptop and other stuff was stolen from A&F shop at the Christiana Mall. I kept my bag down and moved just a little bit inside the store, looked back and the bag was gone. The shop manager as well as the head office were not cooperative. They didn't even show me the video footage of those 10 minutes when my bag was stolen. The security there is horrible and they have no value for their customer.

I am reaching out to everyone and every source I can find to get get help in clearing up the air at our...

COPIES HAVE BEEN SENT TO SENIOR PERSONNEL ABERCROMBIE::::abercrombie uk were given 24 of my items from trading standards to inspect. the items were from 24 different sellers on ebay. they designated them, as all counterfeit. then ebayers sent in purchase invoices from abercrombie outlets! proving they were genuine. one lady ebayer from america is taking legal action against trading standards(she provided proof, that the abercrombie shorts she sold me were genuine)the lady has a lot of clout in america, and has an attorney on her board.. why have you(abercrombie UK), designated genuine items as fake>??? i was told you didnt bother to open the bag, the seal was not broken! as they came off ebay, you simply wrote counterfeit on the bag, and sent them back to trading standards (so arrogant!!!) dorsetcc (p.k.[protected]@dorsetcc.gov.uk, deals with their complaints) trading standards went along with your designation, but as a gov body, they should have returned them to you, and asked that each item was inspected!!! because it was then proved that a lot of these items were genuine!!which you had branded as fake!!! as an old age pensioner, fighting cancer, you would have lost me over £1000, just because of your arrogance, and hatred of ebay!! what have you got to say, about your(abercrombie )non-inpection, on genuine abercrombie items>???

The complaint has been investigated and
resolved to the customer's satisfaction
Resolved Abercrombie & Fitch — Order not received, no help from customer service

I am just flabbergasted. I went Christmas shopping the day after Thanksgiving. My daughter wanted a jacket...

Abercrombie & Fitch Stores
57
%
This company definitely cares about its customers and responds to overwhelming majority of complaints.