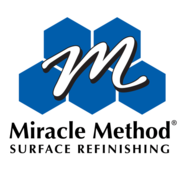 Having problems with Miracle Method?

First, after resurfacing our bathroom, they re-installed our bathtub knobs backwards. The hot is on the cold...

The company material online speaks to their product promise being "incredible durability" & that their...

My name is Kristen Hale and I'm with Kent Shaffer Homes. We have a home we are building for the client and...

I pointed out to the rep that the peeling was not even in the same spot where there was slight movement under the shower floor but he still insisted it was not covered by their warranty since he could bounce up and down on the floor of the shower. The shower floor is not fiberglass and it will give slightly which was the same when the finish was initially done. Moving along to the master bath sink where the lip of the drain was rusted. The rep used the flash light on his phone and looked under the counter of the sink and told me that the pipe was rusted and the rust was coming up from the pipe. What a joke when it was rusted the first time they did it. Again he said it was not covered under their warranty. With that being said, I instructed him to get out of my house and don't bother looking at the sink in the third bathroom because I was sure he would say that was our fault as well and not covered by warranty. He continued to give me the ifs and buts still stating items were not covered by warranty. My husband heard me yelling telling him to just get out because I didn't want to hear anything else he had to say and my husband came in the room and told him to leave as well. There is no way that I would ever recommend them to anyone ever. I had initially informed our realtor that the bathroom would be repaired prior to the sell of our home since it was still under warranty. So on that note, I hope that the buyer will not want these items repaired prior to the sell because if they do, I'd rather replace the items than to fool with another company after being burnt by Miracle Method. I could not have been any more careful with cleaning and taking care of the refinished items but that didn't pay off.
All I can say is BEWARE because this company will probably come up with a million and one reasons why your discrepancy is not covered under their warranty. We were truly taken advantage of and I know that God will take care of those that use others.

Paid several hundred dollars for kitchen sink to be refinished by Miracle Method. After 2 months, the finish is peeling. I called the company and they offered to send a technician out next week to assess the problem and after the assessment they will schedule the work to be repaired if necessary. I let them know that our house is for sale and a showing a peeling sink to potential buyers could cost us an offer on our house. They said they could not come out any sooner and that was their procedure. I could take it or leave it. I am highly dissatisfied with their customer service and would not recommend this business to anyone.

I have been calling this place to get an estimate and ask some questions about repairing countertops and my...

Had Miracle Method do my kitchen counter top. And the counter top was nothing like what I looked at and felt...

another saga to the last PICS WERE POSTED... here year later back to same peeling tub (i paid twice to have...

Leak from bathtub job into my ceiling

This company is horrible. BEWARE. They came out to restore our bathtub and the technician told me to have my husband put the spout to the tub back on because he didn't want water to leak. Well he failed to tell us that we should put a waterproof seal around the spout and it leaked water from showers into our basement and caused a major problem for us. This company did not even have the decency to send someone out here to look at the job and address the issue. They had the nerve to blame my husband for not putting the spout back on and even tried to say I shouldn't have agreed to the technician not completing the job. They are a horrible business to deal with. Nice when they get your money but will ignore you once the check has processed. I would advise anyone who is looking to use this company on Mark Dabling Blvd to beware.

well here goes again, in 2010 i had called miracle method at there corporate headquarters to obtain...

in 2010 i had my bathroom tub and tile resurfaced )let first add that i called the home office in Colorado...

They refinished our bathroom fixtures (sink, countertop and bathtub) and left a mess! Guaranteed no overspray...

We had Miracle Method applied to our shower in January 2007.Â We were to have a 5 year warrenty on the material applied. In a year and a half we started to get peeling of the coating. We now have about 3 square feet that has peeled.Â The franchisee who did the work quit some time after doing our shower.Â In calling Miracle Method headquarters we were informed they had nothing to doÂ with the warrenty, that it was the responsibility of the franshisee.Â As they are no longer associated with Miracle Method we have no warrenty on the peeling coating. It cost us $900 to find out what kind of a company they are.Â We will probably have to get a new shower.

Miracle Method
0
%
Doing nothing would be this company's favorite pastime, if they had the energy for it.