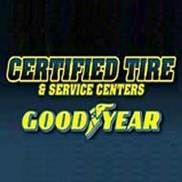 I witnessed the complaint of Mr. Boyd. he has every right to be angry. he was told several lies about his car and then they hid his keys until he signed a paper. These type of shops give good shops a bad rap. I know at least 3 people who claim they had the same kind of problems. Enough already...

I am writing this letter to bring to your attention a very unpleasant situation created by the employees of Certified Tire & Service in the El Cajon store.

After I gave him the car key I asked him how long will it take for the oil change and he answered “one hour”. I asked him why would it take that long, because I had an appointment and nobody was waiting, and he ironically replied that “We don’t work like Jiffy Lube. We squeeze the oil changes between other jobs”.

He turned his back on me and went outside.

I waited another 15 minutes, while my car was just sitting outside the shop, when I thought that I should call the customer service number listed on my estimate paper to confirm what the manager just told me.

A person who gave her name as Lori answered the call and I explained to her what the manager just said and I asked her to confirm to me that this is the company policy. She was outraged when she heard the manager’s comments. She put me on hold and immediately called the manager, and before I finished the conversation with her, my car was inside the shop.

She apologized to me for the manager’s behavior and I thanked her for her help.

One minute later the manager came to me outside to threaten me that if I had other complaints I should go to him first. I told him that I just went to him first, but he decided to ignore me. He lied to me straight face, that he did not say the comments about Jiffy Lube and about one hour time for oil change. He turned his back on me and left again.

That would have still been OK with me, but the manager then decided to send his “dogs” to me. One worker by the name of Warren (don’t know for sure since they don’t wear name tags!) started questioning my intelligence by comparing their work with a doctor’s office and told me that “you don’t know ###”.

He then continued with his offenses and called me a “###”. That’s when I called back the customer service number and I told Lori again about what happened. I felt the shame in her voice and I accepted again her apologies, although these people acted like she has no authority anyway.

What worried me is that she said that the idiot who offended me will receive a ‘reprimand’. Is that the right type of measure against an employee who gravely offended a customer just because he had the courage to inform the customer service about their bad service?

To my surprise, when I called back in a few days, I was told that she did not even enter a complaint for these shameless people! That’s bad customer service!

I also have to mention that a few years ago I had a similar problem at the same store, but with a different manager. I brought in my other car for oil change and after waiting almost an hour, they informed me that (after the new oil has been already poured in!) that they do not have the oil filter my car needs and they are going to put my old oil back in the engine!

Unfortunately these are events that bring shame to this company and should be dealt with in the most serious way. I hope they will take the right measures so no other innocent customers have to go through the same ordeal.

I demanded an explanation from this company and a written apology for what happened.

Certified Tire & Service Centers
0
%
Doing nothing would be this company's favorite pastime, if they had the energy for it.