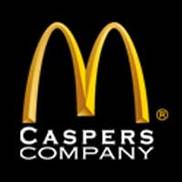 Having problems with Casper's Co?

ComplaintsBoard.com is not affiliated, associated, authorized, endorsed by, or in any way officially connected with Casper's Co Customer Service. Initial Casper's Co complaints should be directed to their team directly. You can find contact details for Casper's Co above.

Use this comments board to leave complaints and reviews about Casper's Co. Discuss the issues you have had with Casper's Co and work with their customer service team to find a resolution.

To whom it may concern, today June 21, 2021 at around 18:15-18:30, I ordered One 10 piece meal with a drink up charge for a Mocha Frappe, A Deluxe Crispy Chicken Sandwhich and a double quarter ponder. I pulled up to the first window and paid and I didn't receive a receipt. I Proceeded to the second window where I was not greeted instead I was asked what my order was. I repeated the order then an employee handed me bag of food but no drink. So she asked us what we were waiting for and we responded with our drink. She told us pull up for the drink. The pulled the next car then two more cars (I believe) pulled off. So we backed up and asked for a drink. The other emplued then began to converse about us pulling up. One employee even stated " Who drinks coffee in the afternoon anyway" So I then requested my money back. The manager approaches the window and ask us AGAIN what our ordered was and what the problem was. We repeated our ordered and then requested our money back again. She walks off comes back some time later and hands us the money rolled up with the receipt. We take the money and then she drops the change on the ground and closes the window. She didn't not apologize or show any concern about the change dropping.

I have had problems with caspers mcdonalds, the first one being at the mcdonalds on bush blvd, in tampa fl across from bush gardens, I went in to the store and was not permitted to use the restrooms as they were closed but the store was still selling food, as this is a health and safety issue, so I could not go to the bathroom or wash my hands before I was going to eat there and was offer no other choice when I asked management... So I left to go else where, yesterday 5-19-09 I went to a caspers mcdonalds in valrico fl off of hwy 60 and valrico road for lunch with my son, when I pulled up through drive through, I told them I would have to pay 1/2 cash and half debit as I only had so much money on me and my debit card... I was told by the manger that they could not do that... Is mcdonalds manger not smart enough to split to order? Guess not, as I left with no food and mcdonalds did not get my money "bad business" so I contacted caspers mcdonalds headquaters [protected] and they couldent give me any one to talk to after the 3rd time I was put on to vice president of friendly services bob conigliaro {spelling might be wrong} this man ask me "what do you want me to do about it make your car payment for you" these were the words he used... I can not even think some one thats a v.P. Of caspers mcdonalds would say such a thing, I explaned I was a disabled person and I would contact the ada, and he said we are done with you and hung up! I recalled caspers headquarters and told the person I dident think her bosses smart # coments were in order, she said you dont have to talk to me like that, I dident say any thing wrong to her just explaning that her boss had made smart # remarks to me after a few min. Bob the vice president came back on the phone and told me, if I called this # one more time he would reverse trace my call and I would be arrested for harrassment, all I was trying to do was make upper management aware of how there v.P. Of friendly services was treating people, very bad!!! If you have had problems with caspers mcdonalds eather with them having no restrooms to used while the store is open or upper management being rude and making uncalled coments to you please report them!!! As this is not a friendly company and they are breaking the heath and safty code by having no place to wash your hands or go to the restroom... This company makes millions of dollars off of people like you and me and is one of the largest mcdonalds out there or at least in fla as they have 51 stores, please take the time to report this company caspers mcdonalds if you have been done wrong by them... Thank you, eric... Plant city fl

Casper's Co
50
%
This company is on the right track to keep up with incoming complaints, but there's still plenty of work to do.