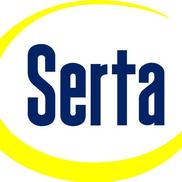 I purchased a Serta Perfect Night Sleep Set three years ago. We had just moved into a new house and wanted to buy the best mattress we could afford, so purchased this set which was $2800.

Approximately 5-6 months later we noticed that there were divets in the mattress in the spots where my husband and I sleep. We called the company where we purchased it from and they told us that we needed to flip it (it is a pillow top!) and it should be fine.

We became frustrated at the one year mark as the divets were now starting to bother my back so we contacted the company we purchased the set from again. It took them 5 months to give us an answer and essentially they told us to give them our original sales receipt. As we were in the middle of a move I could not locate it and they said they could not help us even though we had been complaining from the beginning. They also said they didn't keep track of any records themselves and could not initiate an "investigation" without it.

A few months ago I came across the receipt (and to my surprise there is a 10 year warranty on the mattress) and so contacted Serta directly.

They sent a technician out to look at the mattress. He even noted when he was at the house that it should not look like it is in the shape it is in. At this point, neither my husband nor I are able to sleep in the bed as the indentations are so large that once we roll into them we cannot roll out without sitting up and pushing ourselves out of bed. Both of us have spent the last 2 years at least with back aches, headaches as well as sleep deprivation due to this defective mattress.

He sent a report in and we received a letter in the mail the following week from Serta informing us that they were voiding our warranty (even though the mattress was and is defective!) because there were sweat stains on my husband's side of the bed.

We called the customer "care" line and explained that it is virtually impossible not to have some discolouration on a mattress when you sleep on it (even though we use a mattress pad...sorry, my husband is a man...men sweat!) We tried to explain to the service agent, who by the way did not treat us with "care", that that issue has NOTHING to do with the prominent defects with their product.

We weren't even looking for full compensation, what we wanted was for some recognition that there was a problem with the mattress they made and for them to take some responsibility for this and make some allotments towards us getting a new mattress.

Not only did they refuse to even listen to us, but they flat out refused to even acknowledge the REAL issue...they jsut kept focusing on the "void" warrantly. I'm sorry, but as a consumer, when you purchase something and it then becomes DEFECTIVE during the course of the warranty period, there is an expectation that you were using the product and that it is going to look that way...I mean geez, what are you supposed to do, not SLEEP on a mattress unless you wrap it in $400 worth of saran wrap!!

As far as I'm concerned, it's just an excuse for Serta to get out of replacing their defective product.

It's sad because I was so excited about getting a new mattress and now I'm not even able to sleep on it without being in pain. The product was new, it was expensive and at the time we were told that it was the best mattress the store sold, so we purchased it.

My experience with Serta has not only been unsatisfactory, but disappointing. In this day and age when there is so much competition, a company should stand behind their product. Furthermore, if they cannot stand behind their company philosophy of "our customers are our most valuable asset", then I'm not sure why they are in business. They couldn't even produce a mattress that we could sleep on and didn't care about it's quality or their customers.

At this point, I've been telling everyone who is buying a mattress to stay away from Serta as they don't stand behind their products and they forget you are still a customer after you hand over your money.