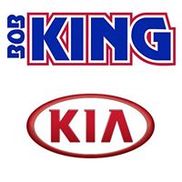 Having problems with Bob King Kia?

ComplaintsBoard.com is not affiliated, associated, authorized, endorsed by, or in any way officially connected with Bob King Kia Customer Service. Initial Bob King Kia complaints should be directed to their team directly. You can find contact details for Bob King Kia above.

Use this comments board to leave complaints and reviews about Bob King Kia. Discuss the issues you have had with Bob King Kia and work with their customer service team to find a resolution.

On June 22, 2018 I went by Bob King kia (1725 Link Rd., Winston Salem, NC 27103) to get an estimate for a small scratch on my LEFT-facing the car, front bumper. I called the Monday after the 4th of July holiday (7/9) and spoke with a woman who assured me that it would take 2 days to repair my bumper; as she pulled up my pictures and information from the estimate. She had an opening for that coming Wednesday (July 11, 2018) stating I will have my car back on Friday (July 13). So I set the appointment and took my 2013 kia Optima LX to them for the repair. Well Friday afternoon comes and I havent heard from Kia so i go by collision to see if my car was ready, only to find that they hadn't even touched my car! Monday (7/16) still havent heard nothing from kia so I stop by that afternoon and my car still wasnt touched! A worker approached me saying they will have it done by Wednesday. Not happy at all, I just leave. So, I wait and go by kia again on Wednesday (7/18) my "pick up date" & my bumper is off in repairs is what I was told. I asked another worker where was the woman I spoke to who said my car would be done last Friday?He said she quit on Monday! Everything began to really seem fishy at this point!! So I go to talk with "Greg" ( who i left my car with initially) asking him hows it going with my car?.. He assures me it's fine and being repaired & painted so i should have it back by Friday(7/20). Friday comes and Greg from collision calls me saying they thought they could fix the scratch but when repairing, the bumper cracked on the RIGHT side-facing the car (which was the size of a pinky fingernail) So he said he ordering me a new bumper! That was not my fault and it wasnt cracked before I brought it in...Now they wanting to charge me for a new bumper when they cracked my original one! If they couldn't fix it they should have said that from the beginning and I would have gone elsewhere. My price went from $700 to over $1300 for their wrong doings! I have been given the runaround for approximately 8 business days now and still dont have my car! I'm very unsatisfied with the service I have been given with this whole situation! I am requesting a reimbursement for the $600 they are overcharging me! I have been inconvenienced all the way round. This is the 3rd strike with this location and I will NEVER go back for ANY services! Please help with this situation. I feel robbed of my money, time and car since its Saturday July 21, 2018 and my vehicle still isnt ready! -Alicia Nunley ([protected]@hotmail.com) [protected]

01/11/18 I had been speaking via email with an individual about several vehicles trying to find my next purchase for my daughter.. I finally was sent something within the price range in which I was willing to go and explained that I would be over after work at 6pm. I get a response "great we will see you at 6:30pm(received at 5:52pm).
I arrived at the dealership swarmed by salesman(which I DO NOT LIKE) and immediately explained what I came to look at. We went to the used car section to not find the car. Dennis then takes me inside so that he can look for the keys to find the vehicle. He can't find the keys then heads to the detail shop, comes back 5 minutes later only to say that the vehicle was sold this morning!
At this point I was irate! I placed my hand up and explained that's fine I'm done.. I emailed the person later to say thanks for the false information only to get a response "Did something go wrong?". Today which is 01/12/18 I finally received another response apologizing and I responded to let them know I would like to be removed from their contact list that I was no longer interested and would be going elsewhere(Battleground Kia). I then receive another email back and the last paragraph really threw me for a loop... "I will remove you from our contact listing, also, battleground is known to do a classic bait and switch once customers actually arrive to the dealership.".
I will gladly send you the entire email but I thought this was really a negative impact on Kia as a whole that a dealership would say this about another dealership of the same company! I work for healthcare in a Intake and I would never say anything bad about 1 branch to get another branch business... If you would like further information pertaining to this bad experience or names of the person emailing me I will gladly get that information to you!

July 26, 2017 I visited Bob King Automall about paint flaking off by the front windshield and driver side...

The complaint has been investigated and
resolved to the customer's satisfaction
Resolved bob king — no service!

after spending 6 hrs on line chat with loren & hayden till i was totally worn out and completely pissed off with their absolute assurance that my jack would be working (###) it is still not working and i told them that icant do this chat thing im not computer literate this is so long and hard i want to die . what the hell are you doing? g phone me or i will call our local t. v. station about you- bad p.r.! bob c, [protected]

Bob King Kia
25
%
Not bad, but could've been way better. This company does respond, but not as often as you'd expect them to.