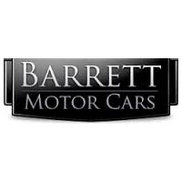 Having problems with Barrett Motor Cars?

Resolved No title/lein on vehicle sold to me

Dustin you need to contact me ASAP about the car you sold me in 2009. I need you to clear this up ASAP. My...

I purchased a used 1998 Cadillac STS from this dealer on 09/26/09 The owner/car salesman Dustin Barrett ask...

This company is very dishonest. Purchased a 2005 Jaguar from them on 12/24/08. It was Christmas Eve and told car title, another key, CD Magazine, Books on the Car and GPS, front grill piece for the car were at their other store. My husband drove 3 hours from Shreveport, Louisiana to purchase the car as a surprise. He is very trust worthy and didn't think things through as he gave someone a cashier check for a car and nothing in return showing proof of ownership - he wanted to hurry and get home as to not ruin the surprise as it was Christmas Eve and needed to be at church at 6:00pm that evening. Dustin Barrett, the owner/sales person had plenty of time to get everything together for the car before my husband got to Dallas/Garland, Texas. Dustin Barrett was given a cashiers check for the entire purchase amount and said he would overnight everything the day after Christmas. The only document signed was a purchase order. We never received the title nor anything else and thought we had been scammed. We were afraid we would wake up one day and the car would be gone as all we had was one key and a purchase order showing payment due. The business number we called had a fast beep and the cell phone number we called would go straight to voice mail or would say voice mail full. Then we would call again and leave another message obviously someone was checking the messages as we could leave another message. Then we started text messaging the cell phone number. Finally on 01/10/09 we get a response and told this was Brannon Barrett, Dustins brother, and he said he had everything and he would mail everything as Dustin had been in a car accident and was alright. We felt much better thinking we would receive the title and other items agreed to on the transaction. We finally received the title about 2 weeks ago but still have not received the other car key or other items promised to us now by two of the Barretts. We have been told several times 'it is in the mail'. I have all of the text messages and can provide the copies of the conversations. Now they are telling me to stop contacting them and to go and purchase all of the items or per their words 'Bring the [censored]g car back and get a refund. First of all we only want what is rightfully ours and what was promised to us. Second - they are in violation of several regulations set by the Texas DMV. There were no disclosures signed and the title was not given to us until approx 45 days later. Also ran a car fax and found out the car was purchased at the Texas auction. They can not treat people this was and get away with it. I plan on reporting them to the Texas DMV and the Better Business Bureau and any where else to warn people to not do business with this unscrupulous car dealership. In researching the internet I found another blog whereas another 'potential' customer was warned to NOT do business with this car dealership as the two guys running it were shady. Believe me they are. I hope this site helps to get the word out and warn people as well. We have had the car in the shop two times already as well. Please also note their are two Barrett Motorcars in Garland, Texas and not related. The business I am dealing with is Barrett Motorcars and then there is an unrelated company called Barrett Motors. I am talking about Barrett Motorcars - one word.

Barrett Motor Cars
100
%
This... this rating shouldn't even be possible. Not every mother cares about her own children how this company cares about their customers. Perfect!