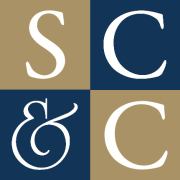 Having problems with Stewart, Cooper & Coon?

I received a call and emails from Stewart, Cooper Coon, a Mr. Johnston with an Indiana telephone number. I was told that he worked for a different group of SC&C that helps potential Executive Employees find employment and represent me in front of potential employers, since executive search firms represent the employer only. He did state it was for high paying executive positions of $160, 000 + in Salary and bonuses.
I was told he had my resume. I asked for a copy of that resume. He did not provide me a copy of my resume and ignored my request. I asked where he obtained my resume. He said Monster
The sales pitch was for me to use their services to do a self discover of myself and perfect my interviewing skills, brand my experience and abilities across the Internet job boards and resume etc, for the purpose of finding executive employment. He said they had a data base of 100, 000 persons to network with. I asked how often they updated that data base. He said their clients provide updates to the data base when they call the individuals from the database for networking purposes and discover that someone listed in the data base is no longer a valid contact.

His sales proposal was to pay upfront a retainer of $3800 plus payments of $1700 per month. The total was just shy of $8, 000.
To determine a value of their services for myself and determine an ROI of an $8000 investment, I used their average time required for employment placements for their clients. He showed me on their web site that it took an average of 6.5 months for employment to be found. Meaning it would be 6.5 months using their service to find employment and paying them $8000 for the privilege of remaining unemployed for 6.5 months. Or another way to look at it was half of their clients obtain employment from using their services before 6 months have passed and the other half of their clients did not find employment until after 6 months had passed up to 13 months later. He did say that certain clients had been removed from the average due to things beyond SC&C's control. I asked how many were not successful in finding employment who used his services. He would not answer that question.
I also asked for a simple data calculation of the number of clients with and with out advanced degrees that obtained employment using their services before 6.5 months had passed and the same for after 6.5 months had passed. He ignored my request.

When I started to ask tougher questions he became combative in tone in his emails.
He told me to go look at his Linked In profile. So I did and Linked In did not find any profile for his name. I thought this was strange to not find a profile. Did he expect me to not go look?

Since I had never done business with or have any experience with their company SC&C, and do not know anyone who has done business with SC&C; I then offered that I would be happy to pay them upon successfully receiving an acceptable offer for employment, that I was not willing to pay a retainer. If their service and 100, 000 persons to network with was as good as he had presented, then it would be OK to be paid after employment was found for me.

He then stated the following in writing
"We need to part company"
That was it.

I believe their service has some value in a self discovery and fine tuning the employment search. I am of the opinion I have already done this part and I already had expert help in fine tuning my resume and linked In.

I do believe that if their clients who were excluded from their published averages were added back in the average numbers would drop significantly.

His focus was to get my money and to start a services fulfillment process, passing me onto their team for processing.
His focus was NOT to truely find employment for me. There is a big difference between the two. One fulfills a service with no promises and the other has the real value of finding employment and income.

This is the second company that has approached me for similar services. Each time I start to ask questions that reveal truth, and each companies representative becomes combative with me and starts to insult me. then I know something is amiss. From personal experience as soon as the sale person says in a terse manner; "maybe we should cancel our call or meeting"; then I know absolutely sure it is the wrong thing to buy from them.

The complaint has been investigated and
resolved to the customer's satisfaction
Resolved Stewart, Cooper & Coon — Chuck McConnell Misrepresented His Ability to Contact Decision Makers

Chuck McConnell, of the company's Stamford, CT office, told me that he could contact actual decision makers at companies, and he promised me that he would be marketing me to people other than HR personnel. Mr. McConnell also made claims about the unique marketing methodology Stewart Cooper Coon uses to sell the people who hire them to help them get a job. He then assigned George Stecyk as my "campaign director."

Instead, of delivering what he promised, Mr. McConnell proved to me that he was simply a con artist.

The Stewart Cooper Coon website is horribly designed, uses outdated technology, and all the data entry pages one is forced to use when working with the company are designed so badly, one is forced to write all entries, and then paste them into the fields. Using the company's website, one is unable to do any effective editing of data entries, and the web pages are not logically organized, allowing one to enter incorrect and conflicting information. Then, there are the resume writers at the company... The draft resume I got from Mr. Stecyk, after having spent over 500 man hours entering data into the firms web pages, was full of spelling errors and read like gibberish. More importantly, the resume writer actually misrepresented my professional accomplishments, which could have put my professional license at risk had I not been extremely careful about reviewing what the company's representative sent me. In fact, one of the company's advisors, Julie Jansen, in a face-to-face meeting with Chuck McConnell and me in early December of 2013, clearly stated that the resume I received from the company's "experts" was garbage, and I quote her directly.

When the company finally started marketing me to potential employers, almost a year after I hired the company and barely two months before my original contract was to end, I found that the marketing person assigned to my campaign was calling HR representatives, and that she did not have contacts at any of the companies I identified as targets. Stewart Cooper Coon recruiters have no personal relationships with CEOs and CFOs of companies, as Mr. McConnell assured me when he was marketing his services to me. Their "marketing experts" are nothing more than people who make cold calls to companies, after doing rudimentary searches for HR contacts on Stewart Cooper Coon's poorly designed job search tool.

I wasted $11, 000 by hiring Stewart Cooper Coon, and I know now that the same services I purchased for $11, 000 were later sold to other people at less than $5, 000. The company is nothing more than an organization dedicated to parting fools from their money, and I urge any and all people considering working with the firm to turn tail and run.

Since my comments made in October cannot be removed from this web site, I wish to clarify my submission. When I posted this complaint, I was frustrated with the time commitment needed for a job search but had not fully discussed my feelings with SC&C management. My complaint was premature. When I discussed my situation with both the CT and Corporate offices, I was gratified that they understood my frustration and not only did they agree to provide an appropriate resolution, they did so immediately. My premature posting took SC&C-CT by surprise because it was posted before our discussions. It was subsequently brought to their attention over 60-days after it was posted. I also wish to state that the comments I made about Chuck McConnell and his SC&C-CT team were written in haste. I did not intend to cast doubts on their integrity or professional reputations, since I had worked with them for twelve months and received valuable services per their contract. I confirmed my statements of value received in various emails to SC&C staff. In my opinion, SC&C-CT and the SC&C Corporation are reputable and professional companies with a well-deserved success record with other clients.

Hi to everyone reading complaints about this untrustworthy company. Stewart, Cooper & Coon is just another...

The complaint has been investigated and
resolved to the customer's satisfaction
Resolved Stewart, Cooper " Coon — Frauds

I have experienced similar 'scams' from companies like Chandler Hill. They dangle big dollar job...

Stewart, Cooper & Coon
50
%
This company is on the right track to keep up with incoming complaints, but there's still plenty of work to do.